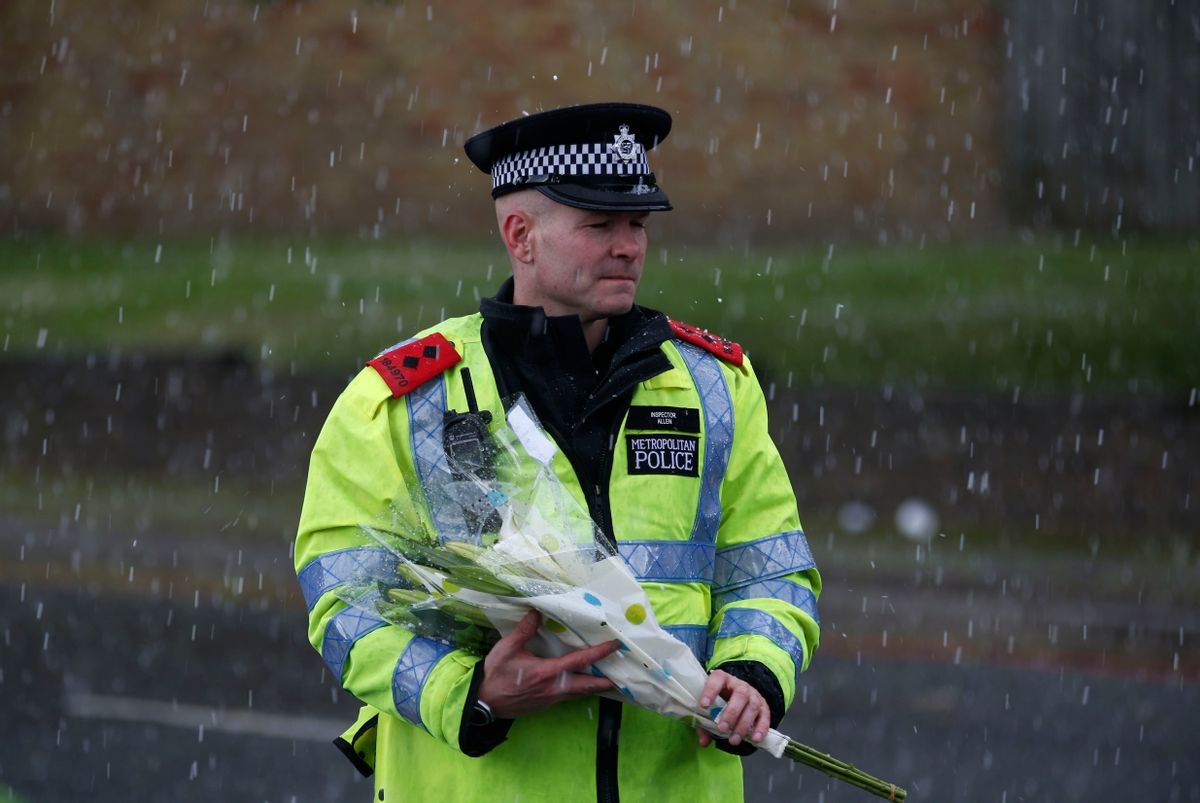 A police officer holds a floral tribute handed to him by a member of the public to be placed at the scene of a terror attack in Woolwich, southeast London, Thursday, May 23, 2013. (AP/Sang Tan)
--

LONDON (AP) — A brave scout leader who may have prevented further violence has emerged as an unlikely hero in the apparent terror attack that left one man dead on the streets of London.

Ingrid Loyau-Kennett got off a bus and tried to reason with the two attackers after she tried to help the man lying on the street but found he had no pulse and was already dead.

The 48-year-old mother kept talking to the two bloody attackers before police came, trying to keep them calm.

Loyau-Kennett, who lives in Cornwall in southwest England, told several British media outlets Wednesday night and Thursday morning that she was returning from a trip to France and was visiting her children in London when the bus she was on stopped because of the melee.

She said she saw a crashed car and the victim lying on the street and tried to help him since she had been trained in first aid. She had determined the man was dead by the time the attackers confronted her.

She said a man "with a black hat and a revolver in one hand and a cleaver in the other came over" and excitedly warned her to stay away from the body.

"I asked him why he had done what had had done," The Guardian quoted her as saying. "He said he had killed the man because he (the victim) was a British soldier who killed Muslim women and children in Iraq and Afghanistan. He was furious about the British Army being over there."

When the man told him he was going to kill police when they arrived, she asked him if that was reasonable and tried to keep him engaged.

Then she spoke to the other attacker, who she described as quiet and shy.

"I asked him if he wanted to give me what he was holding in his hand, which was a knife, but I didn't want to say that," she said. "He didn't agree and I asked him: 'Do you want to carry on?' He said: 'No, no, no.' I didn't want to upset him," she is quoted as saying in The Guardian.

Loyau-Kennett said she was not scared and that the armed men did not seem to be drunk or on drugs. She said she was trying to keep them occupied so they didn't get more agitated.

She re-boarded her bus shortly before police arrived, watching from the bus as police shot the two suspects, who are both receiving treatment in hospital.

"The officers shot them in the legs, I think" she says in The Guardian.