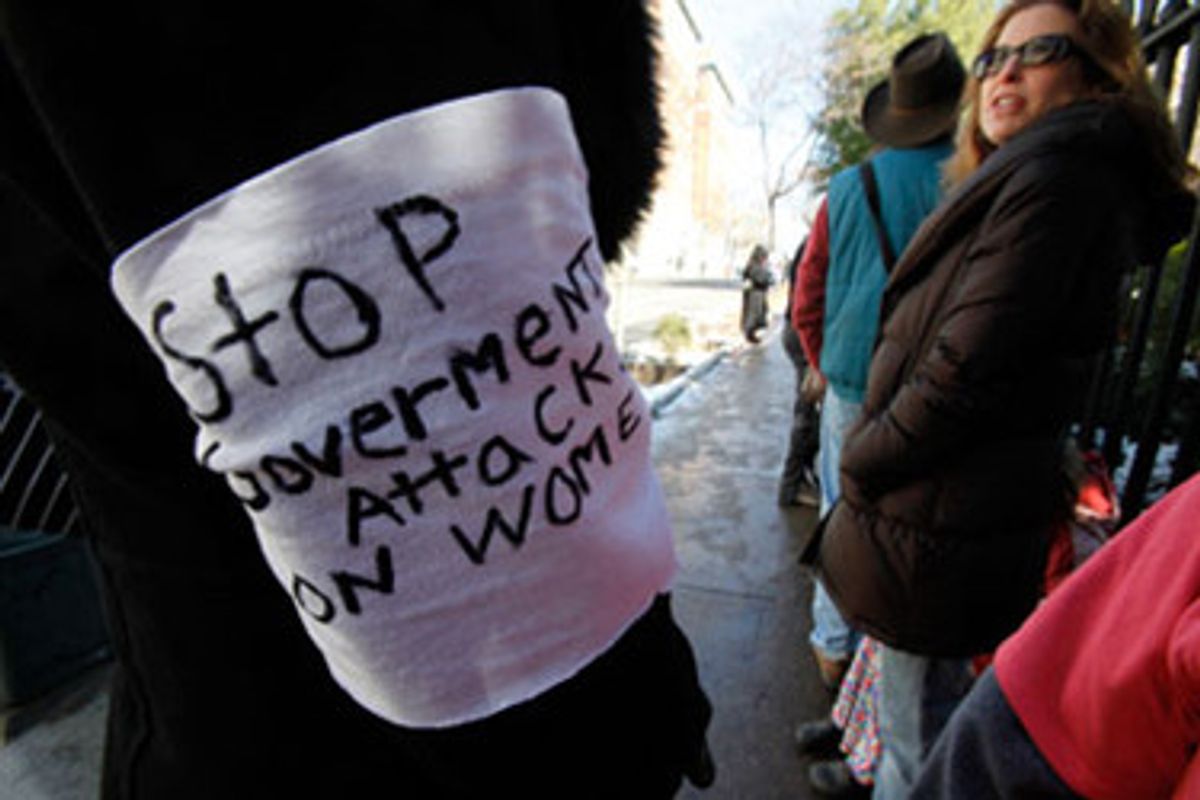 Mississippi's state Supreme Court is currently considering a case that could lead to women being prosecuted for manslaughter if they miscarry or otherwise experience unintentional pregnancy loss, according to a report from Kate Sheppard at Mother Jones.

In 2009, two months after Nina Buckhalter's pregnancy ended in stillbirth, a Mississippi grand jury indicted her for manslaughter, citing her use of methamphetamine while pregnant as "culpable negligence." Buckhalter's attorneys challenged the charge; the Supreme Court hearing began in April and a ruling is expected soon.

Buckhalter's lawyers, as well as reproductive health advocates in Mississippi and across the country, contend that the charges, in addition to criminalizing countless women, could deter women struggling with drug and alcohol addiction during pregnancy from seeking prenatal care or treatment for substance abuse for fear of being prosecuted and create barriers to safe abortion care.

Sheppard goes on to report:

If prosecutors prevail in this case, the state would be setting a "dangerous precedent" that "unintentional pregnancy loss can be treated as a form of homicide," says Farah Diaz-Tello, a staff attorney with National Advocates for Pregnant Women, a nonprofit legal organization that has joined with Robert McDuff, a Mississippi civil rights lawyer, to defend Buckhalter. If Buckhalter's case goes forward, NAPW fears it could spur a wave of similar prosecutions in Mississippi and other states.

Mississippi's manslaughter laws were not intended to apply in cases of stillbirths and miscarriages. Four times between 1998 through 2002, Mississippi lawmakers rejected proposals that would have set specific penalties for damaging a fetus by using illegal drugs during pregnancy. But Mississippi prosecutors say that two other state laws allow them to charge Buckhalter. One defines of manslaughter as the "killing of a human being, by the act, procurement, or culpable negligence of another"; another includes "an unborn child at every stage of gestation from conception until live birth" in the state's definition of human beings.

The cause of any given miscarriage or stillbirth is difficult to determine, and many experts believe there is no conclusive evidence that exposure to drugs in utero can cause a miscarriage or stillbirth. Because of this, prosecuting Buckhalter opens the door to investigating and prosecuting women for any number of other potential causes of a miscarriage or stillbirth, her lawyers argued in a filing to the state Supreme Court—"smoking, drinking alcohol, using drugs, exercising against doctor's orders, or failing to follow advice regarding conditions such as obesity or hypertension." Supreme Court Justice Leslie D. King also raised this question in the oral arguments last month: "Doctors say women should avoid herbal tea, things like unpasteurized cheese, lunch meats. Exactly what are the boundaries?"

And while the court has yet to rule in Buckhalter's case, the circumstances are troublingly familiar: There are already 38 states with "fetal homicide" laws that, as RH Reality Check notes, have been used in 400 cases to criminalize, rather than protect, women after they experience unintentional pregnancy loss.