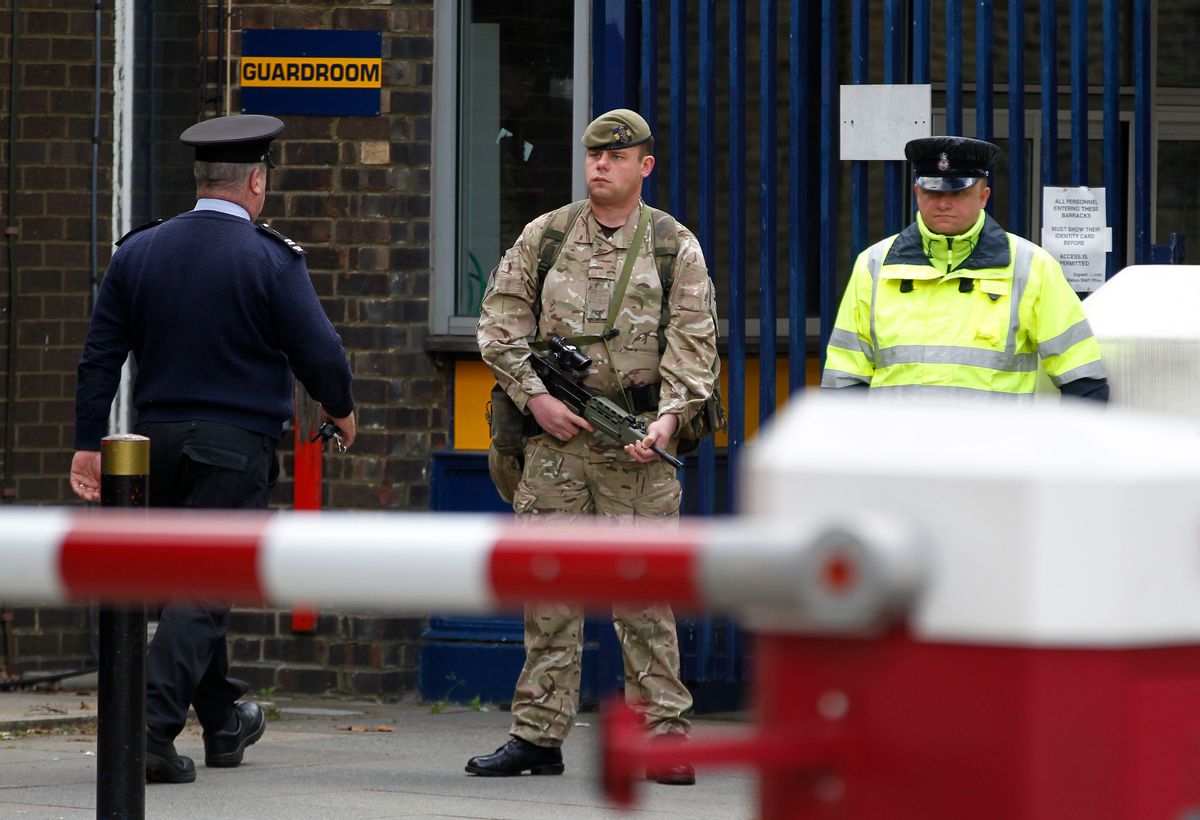 An armed soldier stands guard at the gate of the Royal Artillery Barracks near the scene of a terror attack in Woolwich, southeast London, Thursday, May 23, 2013. (AP/Sang Tan)
--

LONDON (AP) — The British government's emergency committee met Thursday after two attackers butchered a British soldier in a daylight attack in London that raised fears terrorism had returned to the capital.

Prime Minister David Cameron says there are strong indications it was an act of terrorism, and his top advisers will be examining the potential security implications of the attack, which took place near a military barracks in the Woolwich area of the city.

Police Thursday confirmed the dead man was a serving soldier and said his identity will not be released yet at his family's request. They said a post-mortem examination will be conducted later Thursday.

One of the attackers went on video to explain the crime — shouting political statements, gesturing with bloodied hands and waving a meat cleaver. Police shot and wounded the unidentified assailants and took them into custody.

British media say the victim was wearing a shirt in support of troops when he was killed.

Security has been tightened at military barracks and authorities say they are updating their guidance for military personnel.

Police in the county of Lincolnshire in eastern England said a property was being searched in connection to the attack in Woolwich. Police said a search warrant had been obtained but would not provide details about the search. Police were also scouring the attack site for further clues.

London Mayor Boris Johnson urged the people of the city to remain calm. Leaving the meeting of the emergency committee, Johnson appeared to indicate the attack was being seen as a one-off incident.

"Everything I am hearing leads me to think that Londoners can go about their business in the normal way and we are going to bring the killers to justice," he said.

Calling it "an appalling murder," Cameron earlier said there were "strong indications" it was an act of terrorism, and two other officials said there were signs the attack was motivated by radical Islam.

The incident unfolded Wednesday afternoon when officers responded to reports of an assault just a few blocks from the Royal Artillery Barracks in the neighborhood of Woolwich.

Images from the scene showed a blue car that appeared to have been used in the attack, its hood crushed and rammed into a signpost on a sidewalk that was smeared with blood. A number of weapons — including butchers' knives, a machete and a meat cleaver — were strewn on the street.

While there were moments of chaos — one local primary school went into lockdown when a teacher saw the victim's body — the scene was striking in its normalcy. Pedestrians milled about with grocery bags and shopping carts as a body lay motionless in the street — and the attackers remained on the scene, wielding long knives.

Passers-by filmed what appeared to be one of the attackers, his hands covered in blood, making political statements about "an eye for an eye" as a body lay behind him.

Footage — obtained by ITV news and The Sun newspaper — showed a man in a dark jacket and knit cap walking toward a camera, clutching a meat cleaver and a knife. Speaking in English with a British accent, he apologized that women passers-by "have had to witness this" barbarity, saying that "in our land our women have to see the same."

He gave no indication what that land was as he urged people to tell the government to "bring our troops back." British troops are deployed in Afghanistan and recently supported the French-led intervention in Mali.

"We swear by almighty Allah we will never stop fighting you," the man declared. "We must fight them as they fight us." The camera then panned away to show a body lying on the ground.

The Associated Press examined the footage to verify its authenticity, cross-referencing images from the scene, aerial shots, the location of a car behind the alleged attacker and the appearance of a body and a car in the background. There was no immediate way for the AP to verify who the cameraman was.

Other images showed the second suspect clutching a long knife as he engaged in conversation with a woman who British media said tried to intervene to prevent further bloodshed.

The Daily Telegraph identified the woman as Ingrid Loyau-Kennett, 48, and said she confronted the attackers, telling them: "It is only you versus many people. You are going to lose."

Saying she wanted to stop the suspect from attacking anyone else, she asked him if he "did it" and what he wanted.

"He said: 'I killed him because he killed Muslims and I am fed up with people killing Muslims in Afghanistan. They have nothing to do there,'" she told the newspaper.

Britain has been at the heart of several terror attacks or plots in recent years, the most deadly being the 2005 rush-hour suicide bombings when 52 commuters were killed. More recently, Parviz Khan was convicted in 2008 of plotting to kidnap and behead a British Muslim soldier in Birmingham.

Some extremists have lashed out at Britain's involvement in Afghanistan and Iraq. Recently, groups have also criticized Britain's assistance in the French-led mission to Mali to root out Islamic extremists in the north.

"We have suffered these attacks before, we have always beaten them back," Cameron said. "We will not be cowed, we will never buckle."

Two U.K. government officials said the attack seemed to have been ideologically motivated by radical Islam, adding that the assessment was not based solely on video footage of one suspect making political statements against the British government. They spoke on condition of anonymity because they were not authorized to speak about the ongoing investigation.

Scotland Yard confirmed that counterterrorism officers were leading an investigation into the attack. Commissioner Sir Bernard Hogan-Howe said the two men had been arrested and urged Londoners to remain calm. Both men were hospitalized, one in serious condition.

Late Wednesday, riot police fanned out in Woolwich as about 50 men waving the flag of the far-right English Defense League gathered, singing nationalistic songs and shouting obscenities about the Quran.

Muslim religious groups and charities were quick to condemn the attack and urged police to calm tensions. The Muslim Council of Britain called it a "barbaric act that has no basis in Islam," adding that "no cause justifies this murder."

The barracks near where the attack took place houses a number of the King's Troop Royal Horse Artillery and independent companies of the Grenadier and Coldstream Guards. They were the site of shooting events during the 2012 London Olympics.

Fred Oyat, 44, who lives in a high-rise nearby, said he heard four gun shots and went straight to the window.

"I saw one man lying there bleeding, another lying on the pavement being disarmed. A policeman was pointing a gun at him. A third man was lying further up the street. ... He was bleeding profusely," Oyat said. "There were four knives on the ground — big kitchen knives. The knives were very bloody."

David Dixon, headmaster at a nearby primary school, said he saw a body lying in the road outside. After making sure all students were inside, he quickly put the school into lockdown. He then heard shots fired, he told the BBC.

Witnesses recounted seeing the suspects — armed with meat cleavers and possibly a firearm — rushing toward police when officers arrived on the scene.

"He ran towards police before they could even get out of the car," Julia Wilders told Britain's Press Association.

Graham Wilders said he saw one of the suspects pull out a handgun.

"He didn't fire the gun," Wilders told the BBC. "They went for the police with a handgun. The police were the only ones who did any shooting."