Voting is not a right

Iraq's new constitution has something America's doesn't: The right to vote. Republicans want to keep it that way 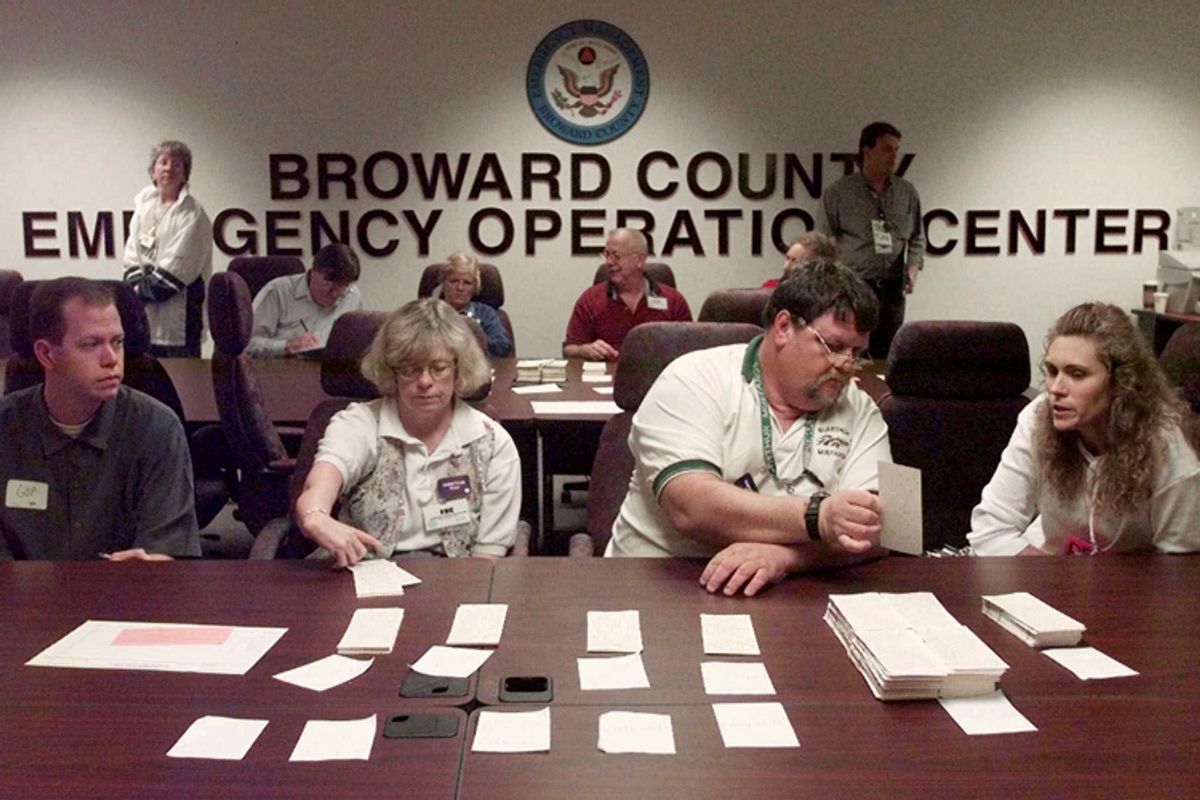 Is it time, at long last, for the citizens of the United States to enjoy the constitutional right to vote for the people who govern them?

Phrased in that way, the question may come as a shock. The U.S. has waged wars in Iraq and Afghanistan justified, at least in rhetoric, by the claim that people deserve the right to vote for their leaders. Most of us assume that the right to vote has long been enshrined in the U.S. Constitution.

Not according to the Supreme Court. In Bush v. Gore (2000), the Court ruled that “[t]he individual citizen has no federal constitutional right to vote for electors for the President of the United States.” That’s right. Under federal law, according to the Supreme Court, if you are a citizen of the United States, you have a right to own a firearm that might conceivably be used in overthrowing the government. But you have no right to wield a vote that might be used to change the government by peaceful means.

FairVote, a nonprofit organization that leads the fight for electoral reform in the U.S., points out:

The right to vote is the foundation of any democracy. Yet most Americans do not realize that we do not have a constitutionally protected right to vote. While there are amendments to the U.S. Constitution that prohibit discrimination based on race (15th), sex (19th) and age (26th), no affirmative right to vote exists.

And that’s just the beginning. While the Voting Rights Act eliminated overt disenfranchisement based on racial discrimination, state governments retain many tools that state politicians can use to disfranchise citizens, not only in state and local elections but also in federal elections. Among these tools are onerous voter registration requirements, like the photo ID laws being pushed by Republicans in many states to disenfranchise low-income Democratic voters. Then there are laws that make forfeiture of voting rights for certain classes of convicted criminals permanent, even after they have served their time and rejoined society with otherwise full rights. This form of disenfranchisement falls disproportionately on the white, black and Latino poor, not on white-collar criminals in the social elite.  According to Bryan Stevenson, a professor of law at NYU, in another decade more citizens of Alabama may be disenfranchised by law than before the Voting Rights Act was passed in 1965.

In an important essay for the journal Democracy, Jonathon Soros and Mark Schmitt of the Roosevelt Institute lend their voices to the growing chorus calling for putting the right to vote in the Constitution. Noting the perennial litigation caused by efforts to manipulate voting rights, they write:

Finally enshrining the right to vote in the Constitution would help resolve most of these cases in favor of voters. It would not make every limitation unconstitutional—it is the essential nature of voting, for instance, that there be a date certain by which votes must be cast in order to be counted—but it would ensure that these limitations are judged under the standard known as “strict scrutiny,” meaning that governments would have to show that the restrictions were carefully designed to address a compelling interest of the state. We would come to find that many familiar aspects of our current voting system would not meet this standard and access to the ballot could be extended to millions who are now actively or effectively disenfranchised.

Two members of the House of Representatives, Rep. Mark Pocan, D-Wis., and Representative Keith Ellison, D-Minn., announced on May 13 that they would introduce an amendment to the federal Constitution guaranteeing the right to vote in America.  Here is their proposed amendment:

SECTION 1: Every citizen of the United States, who is of legal voting age, shall have the fundamental right to vote in any public election held in the jurisdiction in which the citizen resides.

SECTION 2: Congress shall have the power to enforce and implement this article by appropriate legislation.

Who could oppose such a simple and straightforward amendment, guaranteeing a sacred right that most Americans assume is already in the Constitution? The Republican right could, and probably will.

For the foreseeable future the GOP will be controlled by aging non-Hispanic white conservative voters, who think the rising generations of Americans are too brown, too secular and too liberal. Because many of these aging white reactionaries don’t think of most future Americans as “us,” they and their conservative Republican representatives are carrying out a scorched-earth political strategy. The declinists of the White Right sense that they have lost the future, so they are doing what they can to delay their political downfall, while sabotaging the nation-state that the eventual victors will inherit.

In entitlements, the scorched-earth strategy means guaranteeing Social Security and Medicare for today’s middle-aged and elderly non-Hispanic white Republican voters, while using schemes like the plans of Paul Ryan to destroy social insurance for succeeding generations. In politics, the declining right’s scorched-earth strategy means using photo ID requirements, understaffed polling stations and other sleazy methods to deter younger and poorer Americans from wielding the vote to the detriment of gray-haired, middle-class viewers of Fox News.

At some point the declinist demographic will shrink to the point that it loses its power even within the neo-Confederate GOP and a new Republican Party more in tune with a changing America will arise. Until then, expect the Republican right to continue to prefer preventing many Americans from voting at all, rather than compete with the Democrats for their votes.

Even if a constitutional amendment is blocked, a campaign centered on a right to vote amendment can serve to bring attention to the issue and mobilize the forces opposing disenfranchisement in all its forms. In their Democracy article, Soros and Schmitt argue for the educational value of a campaign to amend the Constitution to enshrine the right to vote:

A Right to Vote Amendment would not supersede the many causes of the democracy movement, but it would give them a similar overarching mission, with the principle of full participation and universal suffrage at the forefront. ….Nothing would have to wait for the amendment to be ratified; all the steps toward a real universal right to vote could be pursued and enacted through legislation alongside the fight for the amendment.

The post-World War II constitutions of the former fascist nations Japan and Germany include the right to vote. Oh, and so do the new constitutions of Iraq and Afghanistan. After a decade fighting wars in the name of democracy abroad, maybe we should consider building democracy at home for a change.