Is the anti-gay backlash on?

New York's gay men have been the subject of brutal violence in recent days. Some worry it's in response to equality 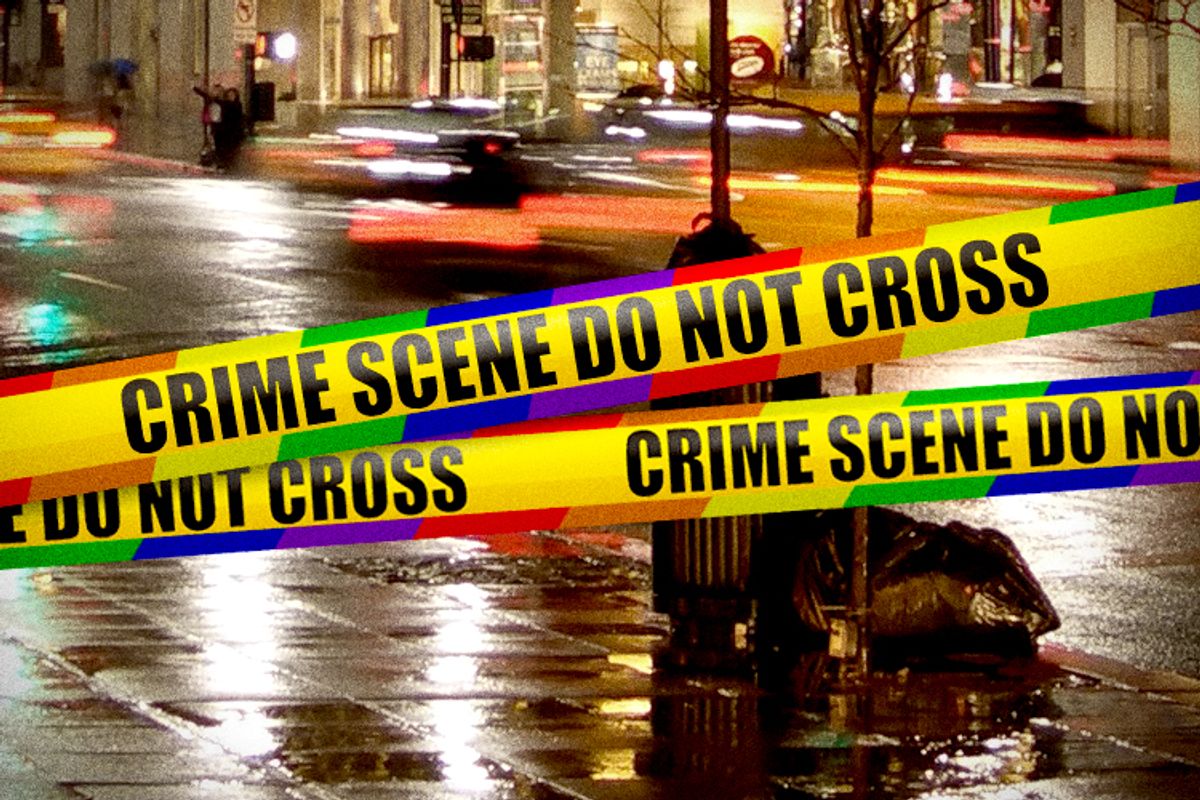 Last weekend, 32-year-old New Yorker Mark Carson was gunned down in the West Village, in what is being treated as an anti-gay hate crime. The irony was staggering: Carson was in a historically gay neighborhood, and just a few blocks from the Stonewall Inn, a location so closely identified with the gay community's struggle for rights that Barack Obama cited it in his inaugural address this year.

Carson's tragic death is part of a troubling trend in New York. Since Carson's death, three hate crimes against gay men have been alleged, and earlier this month a gay couple was attacked by disgruntled Knicks fans outside Madison Square Garden. Per city law enforcement, there have been 24 "anti-gay crimes" this year, compared to 14 to this point in 2012.

The rise in anti-gay violence in New York comes at a time when gay men and women are enjoying greater visibility and acceptance than they have at any point in the nation's history. It's not just the president who's embraced equality; same-sex marriage is legal in 12 states (three of which have made it legal within the past month), and polls indicate that a majority of Americans support equal marriage rights. And some gay historians and civic leaders are suggesting than an uptick in attacks on more-liberated-than-ever gays may not be a pure coincidence.

"You can see in the mind of a mentally deranged person that the progress we've made around gay rights recently is very threatening. That's when these crimes tend to occur," said political strategist and former Clinton administration adviser Richard Socarides, who suggested chilling possibilities for the months ahead. "This isn't just confined to New York. If we see a Supreme Court ruling at the end of next month that we expect will be either favorable or very favorable and advance us closer to full equality for gay people, we might see more of this."

The idea of newly empowered citizens becoming the target of heightened violence is hardly new. "We've seen it with African-Americans, too -- as people get power, other people feel their power is being taken away from them," said Michael Bronski, a professor in studies of women, gender, sexuality at Harvard and the author of "A Queer History of the United States. "I think that's true. But to apply that principle you have to be very careful."

Just how careful? "Can we chalk up a shooting death in the village to gay marriage being passed in Minnesota?" asked Bronski. "That may be a stretch."

David France, the journalist and director of the documentary "How to Survive a Plague," suggested that marriage equality wasn't to blame. "It's not like a Kristallnacht, an organized campaign. This is so spontaneous and somewhat unrelated ... Nothing's different on the streets because of gay marriage. And these crimes are taking place in neighborhoods where gay people are doing what they've done for the past 10 or 15 years."

Just as gay marriage has gone from idle fantasy to national cause célèbre, the idea of an anti-gay hate crime is a relatively new invention. "Things are very, very, very different between now and when the modern gay movement began," said Allen Roskoff, a gay activist and head of the Jim Owles Democratic Club in New York. "Back then if two people of the same sex were holding hands, people would stop and stare and people would come in from other areas to gay bash. It was a common phenomenon where people were scared of being gay except in certain heavily, heavily concentrated areas." Anti-gay violence was unremarkable then.

But Roskoff suggested that an era of greater sensitivity might mean that such crimes represent not a widespread backlash but coincidence that astonishes newly sympathetic citizens. "I don't know whether or not there's really an upswing, or whether this is occurrence where there's been several tragic and horrendous attacks on the LGBT members of our community. But one is too many."

What is most terrifying about the attacks on gay men is their randomness -- if not organized, and if not representative of endemic social stigma (France noted that not even mainstream churches in New York could issue anti-gay rhetoric without reprisal), then what do they represent? These crimes, occurring as they do at what seems to be the tipping point before gay men and women become full citizens, may be the last gasp of a long and terrifying history. "While we as a community have been so singly focused on gay marriage," said France, "we let everything else on the agenda slip away." That includes ignoring the sort of systemic inequality that can lead to violence, said France.

It also includes looking away from violence, including that against disempowered gay youth, for years. Said Bronski: "I suspect there's a huge amount of anti-gay violence happening all the time and there's an uptick in reporting on it ... How much violence is happening to people who are really marginalized, like trans people? How much more violence is happening that we don't even hear about?"

Bronski's suspicion stems from the fact that until very recently, gay violence wasn't discussed at all; the majority was not interested, and for those in the know, little more needed to be said. "For most of my life as a gay man, until 15 to 20 years ago, anti-gay violence was business as usual. Gay men knew it happened and lesbians knew it happened. You knew not to go certain places and if you went to the police they wouldn't take it seriously."

For all the brutality of the past month in New York, the mere fact that the crimes are being framed as hate crimes indicates just how far the movement has come. Said Bronski: "What changes is the way it's conceptualized, the way it's reported. The media's more sensitive and politicians are more sensitive. [Former New York Mayor] Robert Wagner was cleaning up the gay bars because of the World's Fair coming. But Bloomberg can't lose with this. It's a win for him."

Perhaps the hate crimes in New York, awful though they are, symbolize a lesson no one in the gay community wanted demonstrated about just how far they'd come. The new attention to anti-gay crimes, said Socarides, who helped draft the anti-hate crime bill President Obama signed in his first term, means much had changed. "It has gotten better in a lot of ways. As a society we recognize these crimes as hate crimes as opposed to normal homophobic behavior, quote unquote. The police in most places, thankfully in New York, are willing to step up and call it like they see it. That reflects progress."