A progressive defense of drones

As a liberal I was against drones reflexively. But the moral debate is more complicated than I'd realized 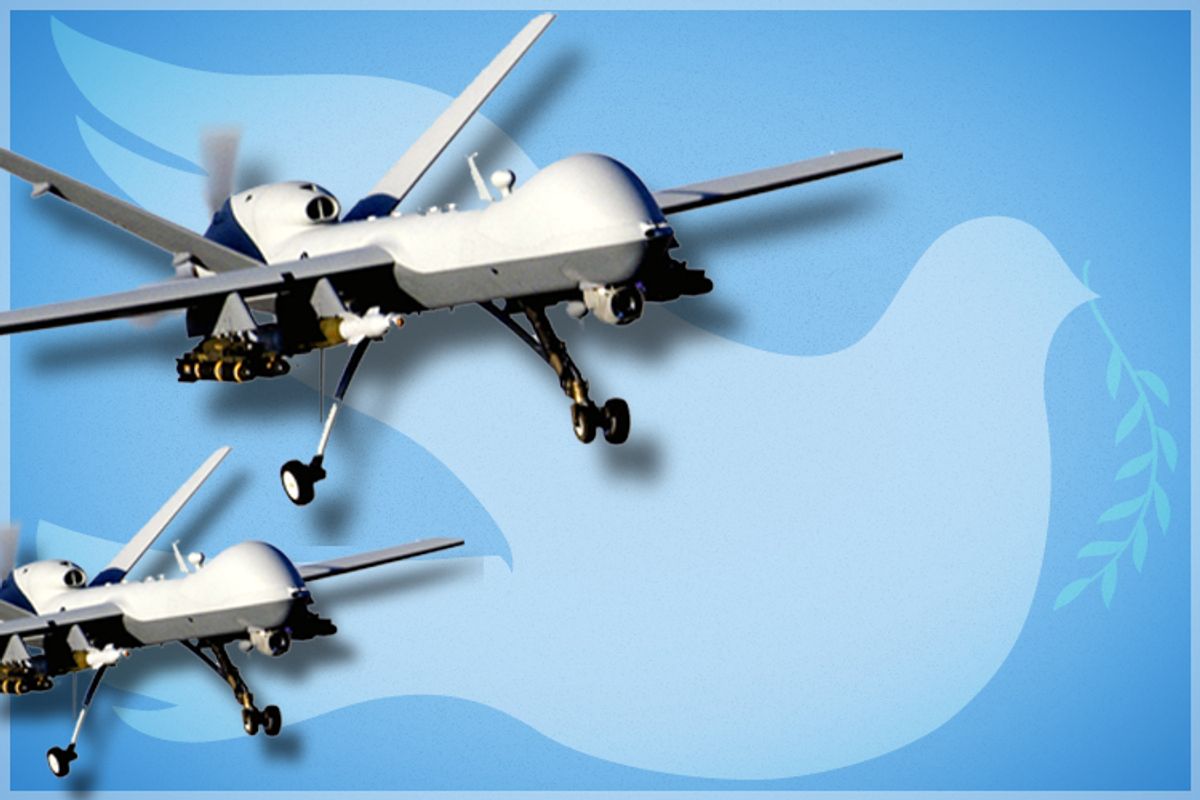 In Thursday’s speech before the National Defense University, President Obama reflected on the concerns about “morality and accountability” raised by drone strikes. Emphasizing the importance of “clear guidelines” and intelligence gathering to properly “constrain” the use of drones, the president also maintained a firm stance on their necessity: Even though drone strikes sometimes result in civilian casualties, in many circumstances they remain the most effective option for realizing specific military objectives.

As a liberal, I’m against drones essentially by reflex. At least, I used to be. Recently, I’ve begun to reconsider that view; and I’m no longer sure where I come down on the morality of drone strikes. Disturbing as I find state-sponsored violence, when drones do the killing instead of soldiers, it seems apparent that we have an easier time recognizing the violence as horrific. War, in its traditional form, distorts our moral reasoning. Drones do not. And as much it grates against my broader political commitments to say so, this is plainly a benefit of drone warfare, other shortcomings notwithstanding.

Many detractors have pointed out that drone strikes, because they put none of our soldiers in harm’s way, are “less costly.” Without our own lives on the line, the theory goes, leaders will feel little compunction — not even the minimal compunction of political exposure — about condemning other human beings to death, especially when those other human beings live many thousands of miles away. To me, this critique seems undeniably right: the numbness that results from using machines rather than soldiers to carry out our dirty work is obviously a moral shortcoming of drone warfare. Simply put, when violence is employed more easily, it will also be employed more often. Hence the nightmarish image of an 18-year-old drone operator basically playing video games from the detached safety of a Nevada bunker.

But there is another moral dimension to drone warfare, running in the opposite direction, which I fear has been lost in the haze of (rightful) outcry. For the same reason that drone warfare stands to make violence easier to deploy — none of our lives are on the line — it also makes violence harder to rationalize. The pain and death of drone strikes, unlike the pain and death of traditional missions, can draw no comfort from narratives of heroism. Destruction wrought by machines is neither noble nor grand. It’s asinine, and unfailingly repugnant. This means that drone strikes must be justified on their own terms, without recourse to war’s long-standing mystification. In a world where we apotheosize soldiers, and rope off their actions from everyday opprobrium, it’s important to consider whether the banal violence of machines might be preferable to the lionized violence of men.

The difference between traditional warfare and drone strikes is that the latter can be clearly identified as hellacious. Not just by poets and philosophers – but by everyone, everywhere, in the immediacy of its horror. When innocent people end up dead as the result of a drone strike, we easily recognize that outcome as morally lamentable. Undaunted by the symbolic distortion of the battlefield, we confront drones with the skepticism — and, as the case may be, the outrage — that accompanies moral clarity. The burden of proof inverts. Unlike traditional warfare, when the loss of life on the other side is presumptively acceptable, and it only becomes unacceptable if circumstances render it so, in the case of drone strikes, the loss of lives on the other side is presumptively unacceptable, and it only becomes acceptable if a persuasive rationale can be offered. Such rationales are not impossible to formulate, but it faces a steep upward grade. It’s an argument of last resort, defensive rather than triumphant.

Before exploring what practical light this observation can shed on drone strikes, it’s worth pausing to ask why moral judgment comes under strain during wartime. The answer is simple: we prize our own lives over enemy lives. This state of affairs is not necessarily justifiable on moral grounds. In fact, it seems plainly unjustified on moral grounds. But it’s also a social fact. A helpful analogy can be drawn to familial relations. Moral philosophers have encountered notorious difficulty in trying to rationalize the treatment of family members differently than the treatment of strangers. In both settings — family and war — the basic problem is the same. Justice makes no claim on love. Membership in a particular polity, no less than membership in a particular family, is a feature of the world to which we are attached – a condition inherited rather than chosen, which, despite its randomness, cannot be overcome by wordplay or will. Confronted with a question like, “Why should their soldiers die before ours?” an objective vantage point — the abstract stance of morality — is simply unavailable.

The dynamic of attachment at play in traditional warfare has persisted since time immemorial, and it is unlikely to relent soon. Nor am I trying to criticize it. Moral judgment is harsh, taut and withering; with good reason do we shield things we love from its gaze. At the same time, the difficulty involved in making sense of violence wrought by our troops also illuminates something important about the interpretation of wartime acts: The task of justifying an act of violence before the fact is distinct from the task of interpreting an act of violence after the fact. For example, in the face of a mission that made strategic sense but ended up yielding massive casualties, it would strike us as perfectly reasonable for an observer to say: “I was in favor of this mission, but now that I see the results, I am horrified.” The first thought — “I was in favor of this mission” — goes to whether, ex ante, the predicates of legitimate force existed. The second thought — “but now that I see the results, I am horrified” — goes to whether, ex post, the externalities can be rationalized.

And even more familiar is the inverse style of claim, in response to a mission that seemed heinous or imprudent but, for reasons outside of the observer’s control, was pursued: “Much as I opposed the mission to begin with, once our troops were on the ground, I believe they did what they had to do.” This commonplace formulation speaks to the way the battlefield consternates moral judgment. It’s one thing to advocate against the deployment of troops – but once the troops are deployed, a switch flips. Because soldiers make the ultimate sacrifice, their actions are not subject to typical moral analysis. What goes on “over there” stands beyond the comprehension — and beyond the everyday reproach — of civilians. This is not to say that soldiers act with moral impunity. Of course they do not. But the moral constraints of the battlefield are of an attenuated kind, very far off, and shrouded in mystique.

In this respect, drones represent a welcome shift of paradigm: they stand to clarify the moral stakes of state-sponsored violence by eliminating the dynamic of attachment that has traditionally accompanied it. By itself, of course, this proposition does not entail that drone strikes are preferable to traditional troop deployments. What it does entail, however, is that the benefits of moral clarity should be weighed, in practice, against the drawbacks of less circumspect decision-making. As much as drones are liable to desensitize leaders, making violence easier to employ, the outrage they produce is also likely to have a chilling effect in the other direction. Which way will this calculus ultimately run? We exercise an important threshold of control over this question. Whether the anesthetic effect of machine-induced violence will outstrip the sense of outrage that violence-by-machines provoke, or vice versa, is not a static political fact to which we must be resigned – it’s a hard issue for us to deliberate with care. One thing, however, is certain. Moral clarity in the face of drone strikes, as compared to troop deployments, is only politically worthwhile — indeed, only possible — insofar as members of the public are kept informed about when drone strikes are happening, and what damage they cause. Transparency is a precondition of outrage – and of accountability.

Importantly, this does not necessarily mean that information about drone strikes should be publicized, and subject to approval, before the fact. The question of ex ante oversight, which has begotten protracted debate in the popular media and academic circles alike, is an incredibly difficult one – as ever with respect to decisions that bear on national security. Many proposals have emerged, running the gamut from leaving the president and military leaders unfettered to make strategic decisions — as in traditional theaters of war — to full-blown judicial review of drone strikes. Sound arguments exist on both sides of this debate, and they are the usual arguments that tend to sprout up around wartime violence. Make leaders too accountable, one side laments, and their decisions will blow in the political wind, reflecting external pressures rather than national security interests. But grant leaders too much discretion, the other side rejoins, and the power they wield — the most tremendous power of all, over life and death — will transform from a means of protection into a wellspring of abuse.

I take no position in this debate – not because I don’t have my own view, which of course I do, but because part of my effort here is to disentangle the question of oversight beforehand from the question of transparency afterward. This distinction is not always drawn with care, and my claim about moral clarity is addressed toward the latter, not the former. To insist that information about drone strikes be made transparent to the public, ensuring that we have an opportunity to scrutinize it with the unrelenting moral clarity that violence-by-machines makes possible, does not depend on the existence of oversight beforehand. Nor is it undermined by the absence of such oversight. The two simply operate on different dimensions. Thus, even if we ultimately decide that it’s wise, for national security reasons, to insulate drone strikes from oversight by Congress, the judiciary or any other governmental body, we should still insist that information about drone strikes be made publicly available after the fact. In other words, regardless of our collective decision, whatever it ends up being, about whether to insulate drone strikes from review, there’s a different ideal of accountability — transparency — that simultaneously deserves our attention. Amid all the discussion of institutionalized oversight, we should not lose sight of what is, in the longer arc of our democracy, the most potent oversight of all: popular disapproval.

This defense of transparency may seem cold comfort, little as it does to ensure that any given drone strike will be executed with the rectitude demanded by instruments-of-death. Yet irresponsible decisions are perennially a risk during wartime, whether it’s machines or troops that carry out the violence. The problem of how to ensure that decisions in the interest of national security are made responsibly — whether the answer is prophylactic oversight, or precisely its absence — is a grave and timeless problem. It yields to no easy answer. And drones neither exacerbate nor attenuate its difficulty. The issue of transparency after the fact, by contrast, is much simpler. In fact, I would go so far as to call it an obvious issue. Transparency ought to exist. Period. Even if there are good reasons to prohibit the American people — or their institutional representatives: legislators and judges — from vetoing individual drone strikes, we nevertheless have a right to know what is happening, once it has happened, and to decide for ourselves whether the results are acceptable.

It is in this respect, if only this respect, that drones are a welcome development in the history of war making. They make possible what to date has been, for all intents and purposes, a fantasy: the irruption of moral truth in a domain — the battlefield — traditionally overrun by mysticism and lies.