Ted Cruz against the world 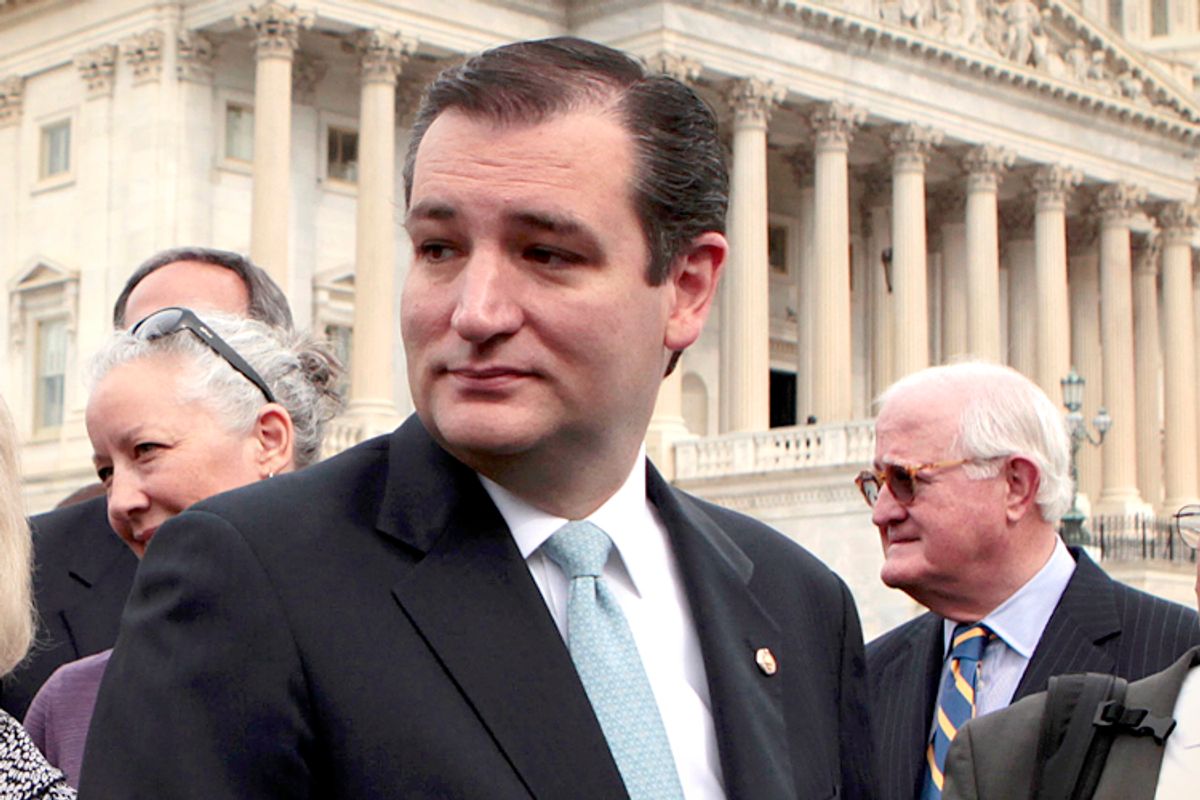 One bonus for Republicans in the trifecta of pseudo-scandals ensnaring the Obama White House this month is that it distracted the party from its looming civil war. It’s even possible that the Senate immigration reform got as far as it did partly because wingnut radio talkers and Tea Party xenophobes were consumed by their hatred of Obama, and paying less attention to GOP immigration sellouts.

But with the easing of scandal fever on the Potomac, Republicans are back to fighting one another, and the week-long Senate clash between freshman Sen. Ted Cruz and Sen. John McCain over the budget is exposing the yawning gulf within the party once again.

Now that the GOP-dominated House and Democratic-led Senate have passed very different budgets, McCain has tried to argue for the formation of a conference committee that would try to reconcile the two. That might be a thankless, impossible task nowadays, but it’s nonetheless the way Congress has always worked. Democrats agree with McCain, and so do most Republicans.

But Cruz was having none of it, because he insisted sneaky Democrats might use the committee to raise the debt ceiling. He got support from Tea Party allies Mike Lee and Rand Paul, as well as Marco Rubio (trying to claw back the Tea Party credibility he lost by working on immigration reform). McCain reminded Cruz and his friends that their party controls the House. “So we don’t trust the majority party on the other side of the [Capitol] to come to conference and not hold to the fiscal discipline that we want to see happen? Isn’t that a little bit bizarre?”

That made the senior senator from Arizona apoplectic. He accused Cruz and friends of trying to “paralyze the process.”  He singled out Utah’s Mike Lee, who is not as bright a light as Cruz, for his ignorance of the way Congress works. Lee made the conference committee sound like a political brothel facilitating “backroom deals.” McCain shot back:  “How do we reconcile legislation that’s been passed by one body and the other body? That’s what we’ve been doing for a couple hundred years. Perhaps the senator from Utah doesn’t know about that.”

Poor John McCain. He gave the world Sarah Palin, and Palin helped give us Cruz, Lee, Paul and Rubio. Still, Ted Cruz’s self-righteous grandeur puts him in a class by himself. He oozed condescension, openly mocking McCain, declaring that Senate Republicans would side with him on the budget impasse. “I will suggest to my friend from Arizona, there may be more wacko birds in the Senate than is suspected,” a reference to McCain calling Cruz, Paul and Justin Amash “wacko birds” earlier this year.

What’s clear is that we’ve reached a new state of warfare in the normally collegial Senate, where increasingly, a minority faction of the minority party has the power to grind everything to a halt. McCain blasted that point of view Thursday: "It's not the regular order for a number senators -- a small number, a minority within a minority here -- to say they will not agree to go to conference. We're here to vote, not here to block things," he said.

That’s clearly Cruz’s plan. Watching the supercilious Cruz mock the sputtering McCain, I was struck by how much he enjoyed preening for the cameras. All senators do, but Cruz stands out, with his proud contempt for Republicans along with Democrats. As he dreams of the White House, with barely five months in the Senate under his belt, look for him to play a leading role in the next debt ceiling battle.

In other news: Michelle Malkin and friends are calling me a racist for referring to Cruz as a “skeezy huckster” on Twitter yesterday as I watched him insult McCain. I admit it wasn’t my most elegant turn of phrase, but I wasn’t aware that “skeezy” or “huckster” were slurs associated with Hispanics/Latinos. Maybe that’s because I don’t travel in the same circles as Malkin. Can you say "projection"?

Still, they weren’t the most artful choice of words. If I had it to do over again, I would call Cruz a “supercilious con man.”