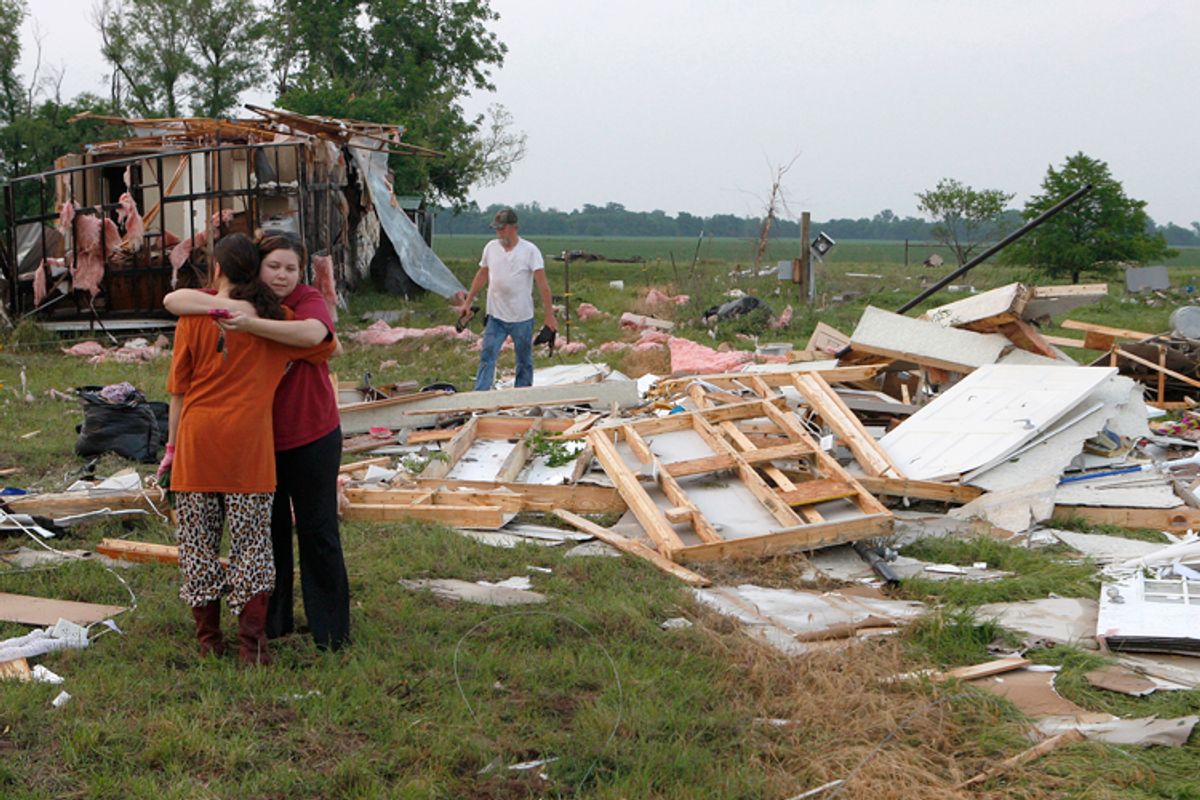 Within hours of this week's tornado disaster in Oklahoma, I (like many others) received emails from the president of the United States and my U.S. senator. With impassioned language, they both claimed to care deeply about yet another community devastated by a cataclysm, and then said the best way for America to support private charities.

It all suggests that the anti-government zeitgeist in America has become so powerful that public officials now feel compelled to downplay the public sector for fear of being tarred and feathered as a socialist, a Marxist or an opportunist unduly "politicizing" a tragedy.

Of course, avoiding a discussion of the government's role at times like these is, unto itself, a politicized decision -- one promoting the illusion that we don't need government. And no matter how much anti-government conservatives deny it, that is an illusion.

Think about it: When you find yourself riveted by disaster response coverage on television, what you are really watching underneath all the graphics and breathless punditry is footage of government in action.

Think about it: Whether dealing with a hurricane on the East Coast, a fertilizer plant explosion in Texas or a tornado in Oklahoma, government remains the best, most powerful and most reliable defender against and responder to large-scale emergencies.

Think about it: For every headline-grabbing story of a private citizen rescuing another individual, there are scores of never-told stories of police officers, firefighters, first responders, public school teachers, government-created warning systems, public hospitals and emergency management agencies saving hundreds of lives and/or rebuilding whole communities. Those stories, in fact, are rarely told because for all the petulant anti-government whining that dominates American politics, we've come to so expect such a strong public sector response that it's barely even considered newsworthy.

That expectation, by the way, is not something to lament. After all, while local, state and federal governments are just as imperfect as corporations and nonprofits, they are -- unlike those private sector counterparts -- popularly controlled institutions. That means in a democratic society they should be a primary way we collectively prepare for and respond to mass emergencies. Indeed, one of the most basic definitions of the term "civilization" -- as opposed to anarchy -- is a society that simply recognizes we're all in this together and consequently builds publicly run institutions to honor that truism.

Though they refuse to publicly admit it, anti-government conservatives actually seem to realize this truism when they or their constituents are personally involved. Oklahoma provides an illustrative example.

In the wake of the tornado, you haven't seen Oklahoma's right-wing legislators making anti-"Big Government" arguments to deride the fact that their state receives more federal tax dollars than it contributes. Instead, you will likely -- and rightly -- see them lobbying to bring back disaster relief funds from Washington. Likewise, you haven't see Oklahoma's arch-conservative demagogues like Republican Sen. Tom Coburn saying government shouldn't help respond to the latest tornado. Instead, he's now insisting “there’s a legitimate role” for government to play.

He's absolutely correct. It just shouldn't take a tragedy for him or anyone else to realize that this will always be the case, at least if America is going to remain a truly civilized society.