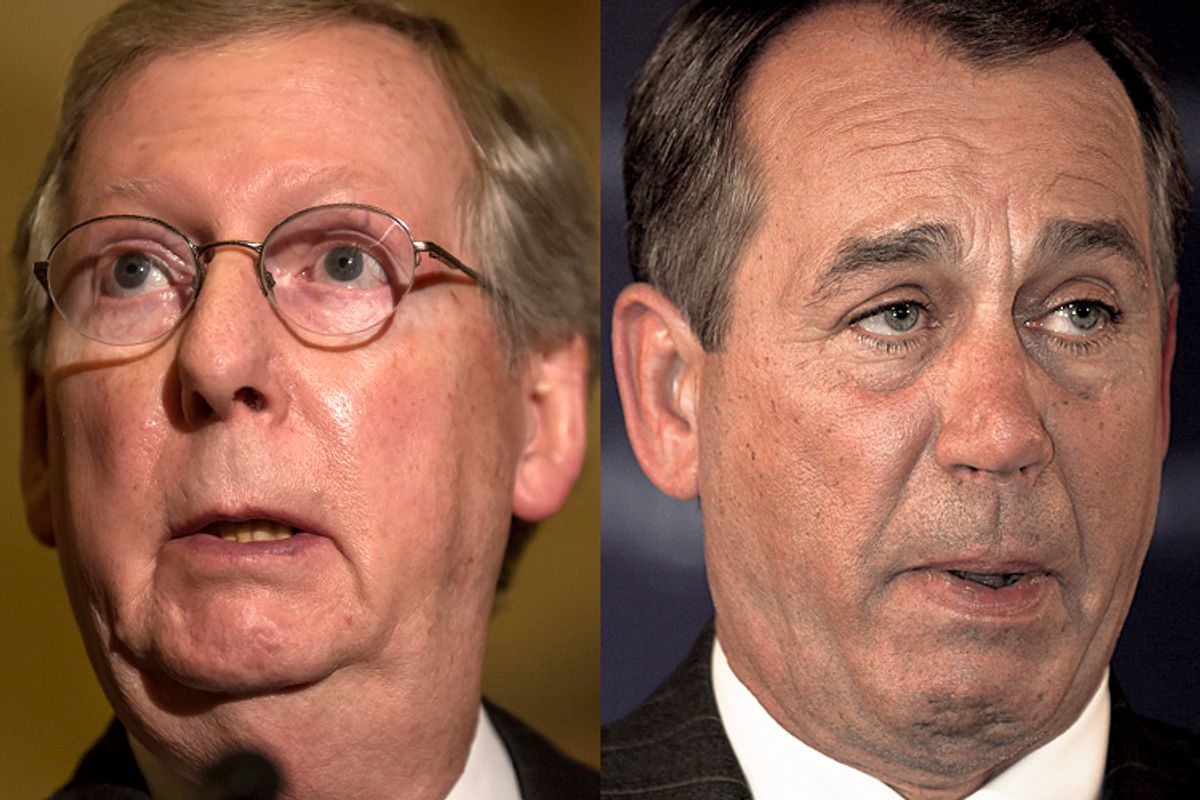 It’s time to call out a major Republican theme of how politics should be practiced in a democracy: the supposed right to be free from criticism. It may sell wonderfully inside the conservative closed-information loop, but it’s a nasty idea that sorts exceptionally badly with democratic politics.

In case you’re unfamiliar, the right to be free from criticism is the core idea behind what used to be complaints about “political correctness” and which have now morphed into the conviction that some accusations are too terrible to be made. See, for example, former Heritage immigration expert (or is that race-and-intelligence obsessive?) Jason Richwine. As he told conservative reporter Byron York:

The accusation of racism is one of the worst things that anyone can call you in public life … Once that word is out there, it's very difficult to recover from it, even when it is completely untrue.

What does “difficult to recover” mean in this context? Richwine, after all, is the protégé of none other than Charles Murray, who has been accused of racist writings for … well, for decades. And yet Murray has “recovered” just fine, at least if book sales and think-tank posts and other traditional markers of success are concerned. Richwine surely knows that. So what’s his complaint? It is the same as most complaints about political correctness: that some people won’t consider his actions respectable.

(No doubt someone with a bit more imagination than Richwine might imagine even worse things to be called than “racist.” For example, someone could be called a member of an intellectually inferior race, genetically doomed to always be looking up to those races that have superior intelligence. But pointing that out would no doubt violate Richwine’s standards of civilized political discourse.)

Similarly, the Republican response to the Democratic “war on women” rhetoric hasn’t been so much that the criticism is wrong but rather that it’s -- as one Republican member of the House said this week -- “repugnant.”

One might say that whatever grievances one former Heritage think-tanker, or even some Republican politicians, might have are interesting but of little importance in the grand scheme of things. But it turns out that the exact same logic -- the logic that conservatives should feel perfectly free to engage in political advocacy without any danger of someone criticizing them -- has become central to the Republican platform on campaign finance.

Indeed, only a few years ago, most Republicans held the opposite position; during the debate on the (bipartisan, to be sure) McCain-Feingold campaign finance bill, the Republican alternative was to allow money to flow more freely as long as it was disclosed. That was then. Now, disclosure is seen as an abomination -- precisely because it can lead to, yes, criticism of the donors.

Thus, Mitch McConnell’s epic op-ed this week, in which McConnell claimed the First Amendment was imperiled by “explicit attacks on groups and other private citizens” by Barack Obama’s 2012 campaign. Those attacks did, in fact, happen; McConnell linked to an Obama campaign page which publicized opposition research on big Mitt Romney donors. Again, there’s no claim that the research was incorrect or that anything beyond that criticism took place (nothing about harassment by federal government agencies, for example). It’s just the criticism alone that is, for McConnell, beyond the pale. For McConnell, the whole thing is “the left-wing playbook: Expose your opponents to public view, release the liberal thugs and hope the public pressure or unwanted attention scares them from supporting causes you oppose.” McConnell then concludes by observing that  “[t]he First Amendment … was written to protect speech that was not popular” and that “The American people need to remain vigilant against any effort by the powerful to stifle speech.” Which, for McConnell, means keeping that speech anonymous if possible, and if not, then protected against criticism.

I think it’s wrong to read this, as Ed Kilgore does, as a claim that if government officials knew who was criticizing them, they might retaliate with actual oppression and “the jails [would be] crammed with poor innocent conservatives.” No. What McConnell says plainly is it’s the criticism itself that’s the danger that must be avoided.

It’s nuts. But it’s also deeply anti-democratic. It’s true that we should be careful, in democratic politics, to avoid questioning people’s motives. There’s nothing wrong, however, with noting the interests involved in politics, in questioning who would benefit from a policy, and from pointing out that a campaign is financed by people who would benefit from their preferred policies being adopted. Indeed, there’s nothing wrong with the press using those donors as a shorthand way of informing citizens which interests are represented by the various candidates, or for those candidates to make a point of which interests finance their opponents.

Moreover, there’s simply nothing wrong with saying that incorporated in the freedom of speech is the risk that one’s speech is going to be criticized. The framers of the Constitution did not, in fact, include in the real First Amendment McConnell’s right not to be criticized. Nor would they support it.

Liberals are not immune to this kind of thinking. Indeed, as far as I know, complaints about “political correctness” began with liberals who were frustrated that those to the left of them criticized them for being insufficiently party-line, with the implied penalty of social disgrace -- social disgrace, that is, to the extent that being publicly considered not “really” on the left mattered to anyone. But in most recent cases, liberal complaints about conservative criticisms are limited to legitimate complaints about accuracy (as in the phony idea that 47% of the population are “takers”) or decency (criticizing Sandra Fluke when she testified publicly was reasonable, but calling her a “slut” because she supported Affordable Care Act provisions for birth control was not).

The First Amendment and political speech are indeed very close to the core of democracy. The Republican delusion that it includes the right to be free from criticism is, therefore, quite destructive. That’s true when they seek the freedom to attack ethnic groups without risking being called out for racist comments; it’s true when they seek the freedom to dominate campaigns financially without risking being called out on that. Mitch McConnell and the Republicans are dead wrong about that. And if they disagree with me? They are free to say so.