From predatory soldiers to corrupt politicians, a look at the finest documentaries YouTube has to offer 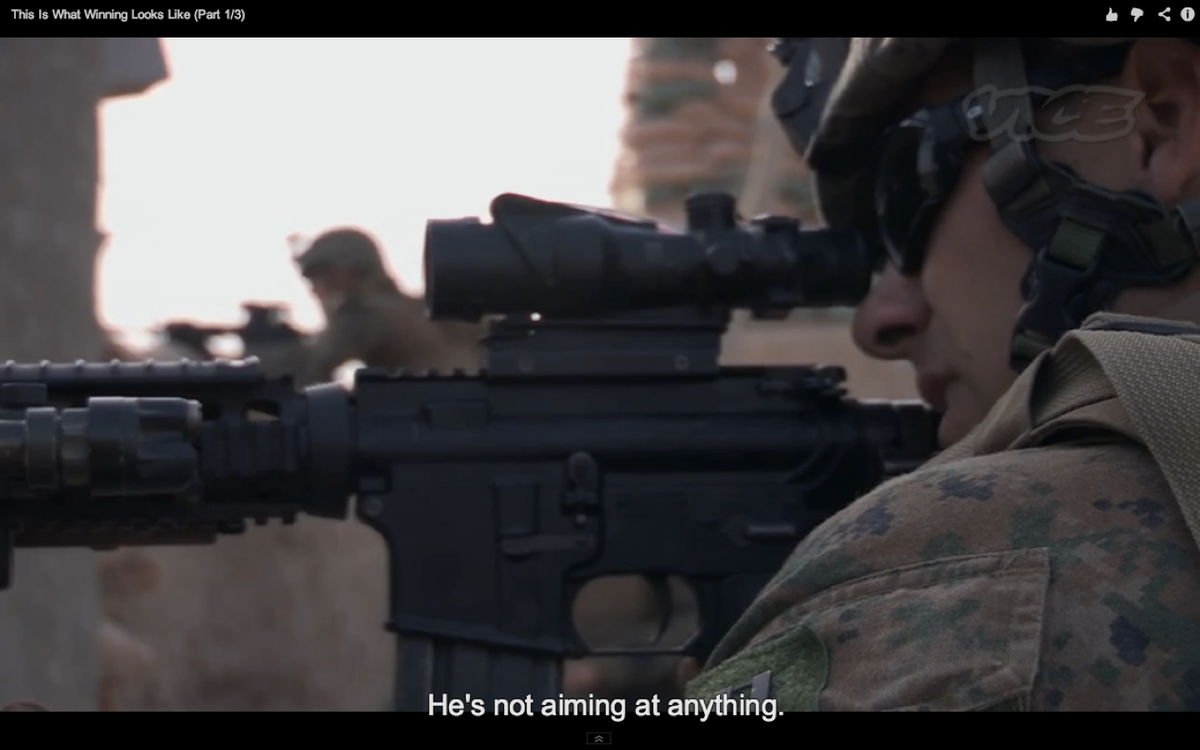 A few things I learned from this week’s stories:

• The Sopranos are alive and well in Afghanistan.
• The California Legislature is a surprisingly lucrative cash cow.
• Never mess with the Mossad.

For more insights like these, please take a moment to subscribe to The I Files, the informative, sometimes fun, and totally free one-stop news source.

We promise it’s all perfectly legal.

“Try doing that day in and day out -- working with child molesters, working with people who are robbing people, murdering them. It wears on you after awhile.”

So says Maj. Bill Steuber, a Marine serving on a forward operating base in southern Afghanistan. He’s referring not to enemy soldiers, but to U.S.-trained Afghan security officers who will take over once the Americans withdraw at the end of next year.

This is just one of the many disturbing and surprisingly candid moments in “This Is What Winning Looks Like,” a three-part documentary series from Vice that highlights the challenges the last U.S. troops in Afghanistan face. Filmmaker Ben Anderson spent five weeks embedded with Marines as they transition to a training and advisory role. They no longer have the authority to act on their own and often are rendered ineffectual despite their best efforts. In some parts of the country, the Marines must deal with an Afghan military force filled with drug users, sexual predators, swindlers and inept fighters.

The title of the film comes from a quote by Gen. John R. Allen, the former commander of NATO forces in Afghanistan, who on his last day in charge said: “This is victory. This is what winning looks like.”

According to the documentary, winning looks pretty damn grim.

“Ever see the TV show ‘The Sopranos?’” Steuber says, when asked to characterize the situation there.

The strongest moments in the film focus on the war through the eyes of Steuber, who often is visibly disturbed and disgusted by the scope of the lawlessness and depravity he witnesses but is powerless to stop.

In one of the most disturbing scenes, Steuber confronts a local police chief about the young “chai boys” who are kidnapped and sexually molested by soldiers on the base. At least one boy was shot while trying to escape his captor. The chief argues that there is nothing he can do to stop the practice. “Those little boys stay willingly in the patrol bases and offer their asses in the night,” he claims.

Scenes like these play out largely unedited, allowing us to witness the miscommunication and cultural gulf between the Marines and Afghans. The frustration and fatigue of the Marines is evident. Four of the Marines whom Anderson filmed in Afghanistan later committed suicide when they returned home.

Anderson argues that at this point, “winning” merely means withdrawing and saving face.

“We’re not leaving because we’ve achieved our goals. We’re leaving because we’ve given up on achieving those goals,” Anderson says. “And it could even be worse than that, because all the fighting has been to introduce a corrupt, hated and feared government who in some areas make the Taliban look like the good guys.”

It’s a plot straight out of a pulp spy novel: A mysterious prisoner charged with unspecified crimes is found hanged in a suicide-proof cell. His crimes are so serious that his identity is kept hidden even from his own prison guards and his very existence is considered a national security secret.

“Prisoner X” tells the real-life spy story of Ben Zygier, an Australian national who immigrated to Israel and worked for the Mossad, Israel’s intelligence agency. This Australian Broadcasting Corp. documentary investigates why Israel went to such extraordinary lengths to conceal Zygier’s identity and what exactly he did that was so damaging.

The trail leads from Australia to Lebanon and touches on one of the core contracts between the Israeli state and its people: the repatriation of the fallen. Because Israelis are required by law to serve in the military, the state guarantees that they will always come home, even if they die in war.

I won’t give away all of the details here, but it seems as though much of the mystery boils down to Zygier being a pretty poor spy. In trying to prove himself to his superiors at the Mossad, Zygier inadvertently betrayed a Lebanese double agent who was working for the Israelis (or maybe wasn’t working for the Israelis -- the plot thickens as the Lebanese source claims that he was a triple agent reporting back to his own country).

In trying to serve his adopted country, it seems as though Zygier ultimately harmed Israel and himself.

“As a boy, a good Jewish boy … he came to this country,” says one former Mossad agent. “Thought that he could be more useful and is more important to this country than other people thought. There was no malice here. What there was was stupidity, and there was a crime.”

“A Long Ride Toward a New China,” Stephen Maing for The New York Times’ Op-Docs

Currently, 69 Internet users and bloggers are known to be in jail in China for posting “inappropriate” content online. This excerpt from Stephen Maing’s documentary, “High Tech, Low Life,” follows one self-appointed journalist who risks the wrath of Chinese authorities to cover the stories that are ignored by the state-censored media.

Zhang Shihe, aka “Tiger Temple,” works as a one-man news team, biking around the countryside to document cases of corruption and abuses of power and talking to people who usually are overlooked by mainstream journalists. Considered one of China’s most influential bloggers, Zhang’s reports are read by tens of thousands. He switches his content among 10 different blogs to keep reporting when some of his sites are shut down.

“News in China serves political purposes. The central government tries to control everything,” Zhang says. “It’s not just some articles that can’t be published. They sometimes even ban the use of certain words.”

Zhang continually spars with authorities. He has been put under house arrest (an incident he filmed surreptitiously) and was forced to leave his home in Beijing. He now reports from a base far from the capital.

“If you think I’m slandering, you can sue me,” Zhang says defiantly. “But what will you say if you find out all my writings are truthful?”

“Enemies of the People,” Thet Sambath and Rob Lemkin

Earlier this week, Cambodians marked the annual Day of Remembrance, also known as the Day of Anger, to commemorate the nearly 2 million people who died during the Khmer Rouge’s reign of terror in the 1970s. In a country that refused for decades to hold a trial or truth commission to punish those responsible for the mass deaths, this was the one time that Cambodians would publicly speak about their experiences and demand justice.

While the long-awaited genocide trial of the top Khmer Rouge leaders is at last underway, there are still many unanswered questions about why so many Cambodians were killed and who exactly was responsible. Many young people don’t believe the stories their parents tell about those times. A short history of the Khmer Rouge was just included in school textbooks in 2010, so tales of mass displacement, starvation, torture and executions almost sounded like grim fairytales told to frighten misbehaving children.

Journalist Thet Sambath spent 10 years investigating the Khmer Rouge and gaining unprecedented access to men and women who committed many of the atrocities. He also spent years gaining the trust of Nuon Chea, known as “Brother Number Two,” who was the highest-ranking member of the Khmer Rouge after Pol Pot. This was a personal as well as journalistic quest for Sambath, who lost much of his family during the years the Khmer Rouge were in power.

In this excerpt from the Emmy-nominated documentary “Enemies of the People,” Sambath convinces Nuon Chea to admit for the first time that mass killings took place.

“I do this work not just for my mother and brother and sister,” Sambath says, “I do it for all the people.”

I always appreciate it when a video starts with a warning. In this case, the disclaimer states: “Warning: What you are about to see is perfectly legal.”

By law, an individual could give a maximum of $3,900 last year to someone running for office in the state Legislature. John A. Pérez, the speaker of the Assembly, got around this by having fellow Democrats raise money and donate it to the campaigns he recommended. In this way, $5.8 million ultimately was funneled to those campaigns. It all sounds a bit shady with checks delivered to a private office, but apparently, this is all perfectly legal.

The kicker to the story is that the lawmakers who brought in the most money were also the most likely to be named by Pérez to membership on the Assembly’s most powerful committees.

Perfectly legal? Yes. What the voters had in mind when they passed campaign finance reform? Probably not.

A Long Ride Toward A New China Afghanistan California China Hbo Prisoner X: The Secret The I Files The Middle East The Sopranos Top 5 Investigative Videos Of The Week Vice Video