Up to 2 million march against Monsanto

Rallies gathered across the U.S. and in over 50 other countries to draw attention to Monsanto's practices 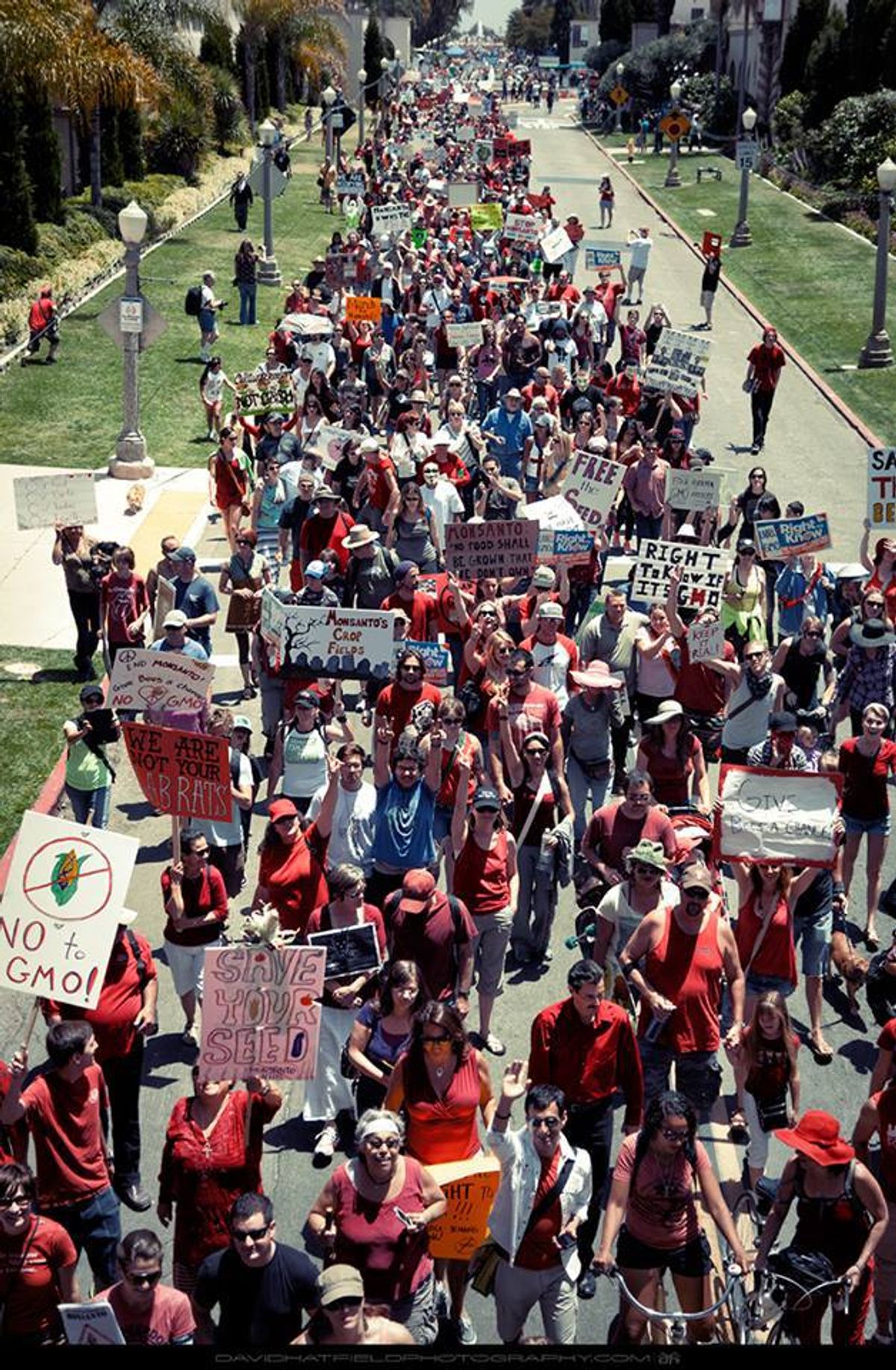 Organizers say that two million people marched in protest against seed giant Monsanto in hundreds of rallies across the U.S. and in more than 50 other countries on Saturday.

"March Against Monsanto" protesters say they wanted to call attention to the dangers posed by genetically modified food and the food giants that produce it. Founder and organizer Tami Canal said protests were held in 436 cities across 52 countries.

Genetically modified plants are grown from seeds that are engineered to resist insecticides and herbicides, add nutritional benefits, or otherwise improve crop yields and increase the global food supply. Most corn, soybean and cotton crops grown in the United States today have been genetically modified. But some say genetically modified organisms can lead to serious health conditions and harm the environment.

The use of GMOs has been a growing issue of contention in recent years, with health advocates pushing for mandatory labelling of genetically modified products even though the federal government and many scientists say the technology is safe.

The "March Against Monsanto" movement began just a few months ago, when Canal created a Facebook page on 28 February calling for a rally against the company's practices. "If I had gotten 3,000 people to join me, I would have considered that a success," she said Saturday. Instead, she said, two million responded to her message.

Together with Seattle blogger and activist Emilie Rensink and Nick Bernabe of Anti-Media.org, Canal worked with A Revolt.org digital anarchy to promote international awareness of the event. She called the turnout "incredible" and credited social media for being a vehicle for furthering opportunities for activism.

Despite the size of the gatherings, Canal said she was grateful that the marches were uniformly peaceful and that no arrests had been reported.

"It was empowering and inspiring to see so many people, from different walks of life, put aside their differences and come together today," she said. The group plans to harness the success of the event to continue its anti-GMO cause.

"We will continue until Monsanto complies with consumer demand. They are poisoning our children, poisoning our planet," she said. "If we don't act, who's going to?"

Monsanto, based in St Louis, said on Saturday that it respects people's rights to express their opinions, but maintained that its seeds improve agriculture by helping farmers produce more from their land while conserving resources such as water and energy.

The US Food and Drug Administration does not require genetically modified foods to carry a label, but organic food companies and some consumer groups have intensified their push for labels, arguing that the modified seeds are floating from field to field and contaminating traditional crops. The groups have been bolstered by a growing network of consumers who are wary of processed and modified foods.

The Senate this week overwhelmingly rejected a bill that would allow states to require the labeling of genetically modified foods.

The Biotechnology Industry Organization, a lobbying group that represents Monsanto, DuPont & Co and other makers of genetically modified seeds, has said that it supports voluntary labeling for people who seek out such products. But it says that mandatory labeling would only mislead or confuse consumers into thinking products weren't safe, even though the FDA has said there is no difference between GMO and organic, non-GMO foods.

However, state legislatures in Vermont and Connecticut moved ahead this month with votes to make food companies declare genetically modified ingredients on their packages. And supermarket retailer Whole Foods Markets Inc has said that all products in its North American stores containing genetically modified ingredients will be labeled as such by 2018.

Whole Foods says there is growing demand for products that don't use GMOs, with sales of products with a "Non-GMO" verification label spiking between 15 percent and 30 percent.