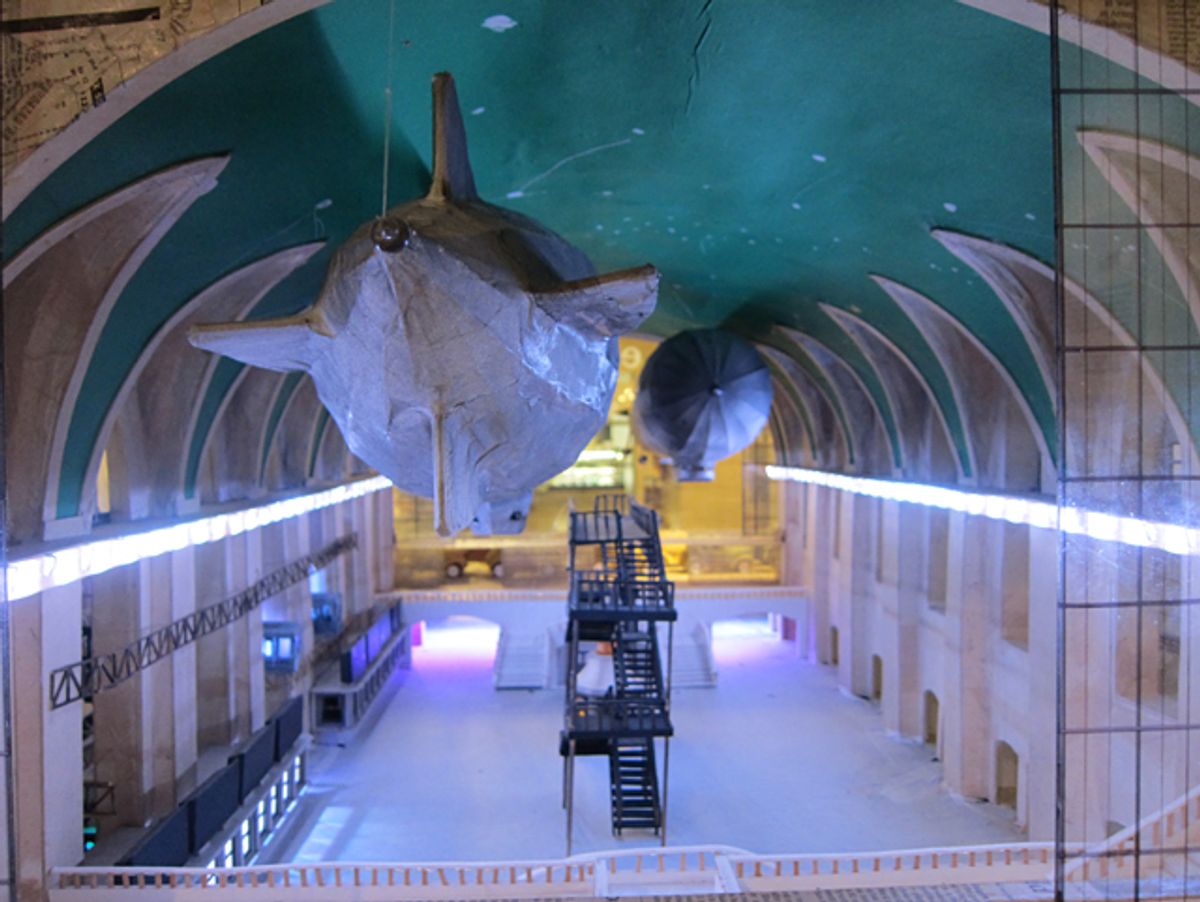 For meditations on time, there are few places more frenetic with marking the seconds than Grand Central Terminal. The hundreds of thousands of people that pass through the station each day create a constant motion around the gold clock that sits calmly ticking away the moments in the center of the Grand Concourse. It’s around this idea that On Time / Grand Central at 100 was organized by MTA Arts for Transit and Urban Design.

The contemporary art exhibition honors the terminal’s centennial, and many of the artists should be familiar for anyone who has spent time in the subway looking at the panoramic placards of art installed by MTA Arts for Transit above the seats, with Sophie Blackall‘s drawings of missed connections or Marcos Chin‘s sleek graphic design-oriented art. Other projects have been widely covered before, such as Improv Everywhere’s freezing performance in the station or Alexander Chen’s lovely orchestration of the paths of trains on the Vignelli map that chime with each intersection. So while there isn’t much surprise, there are a few striking projects that elegantly relate to this idea of Grand Central being a convergence of people and time.

For example, there’s Lothar Osterberg’s detailed, whimsical model of his interpretation of Grand Central Terminal based on his imaginative memories, which have inserted a couple of hovering zeppelins below the constellations. The model made from found materials, while charming and beautiful, is really even more interesting a subject for his photogravures, a time-consuming 19th century form of photography, which you may have seen sprawling in the subways. The German artist has made other models for photogravures of New York, such as the Brooklyn Bridge, all with this strange interpretation of the past as part of a playful manipulation in the present.

Similarly using the idea of photography as altering the perception of time, Penelope Umbrico has covered a whole wall in a grid of repeated photographs of light falling in angles onto the Grand Concourse, one of the most iconic images of the terminal. The repeated five images that date from between 1913 and 2010 are all printed directly from their commercial sources with watermarks intact and different cropping and framing giving them a slight individuality. It’s a simple, but elegant, demonstration of how this exact moment repeats as an ephemeral marker of time.

Finally, Jane Greengold’s installation creates an entirely different type of this time narrative, using an amassment of objects in a glass case to imagine stories of the people who may have lost these objects. For example, a tiny statue of a woman in a hat is accompanied with a scrawled note that states that “the owner was young and beautiful. She dropped it in the Club Car and cried when it broke.” A pocket watch that is described as lost in 1959 reads: “why do they use pocket watches still? So much easier to lose.” While these stories are invented by Greengold, they’re easy to merge into the travelers who do leave these stray objects behind in the terminal’s massive Lost and Found, where what is lost preserves that exact moment in time and transit.

It’s unfortunate that the exhibition is hidden away in the Transit Museum’s gallery annex that always is more gift shop than an exhibition space, as this art would be perfect to display down in the busier parts of the terminal where the idea of the passage and capture of time would most resonate. Down in the chaotic Grand Concourse they could give these pausing moments where, as Billy Collins’ poem that leads off the exhibition states, you can “lift up your eyes from the moving hive/and you will see time circling/under a vault of stars and know/just when and where you are.”