The attorney general's "remorse," sincere or not, is at least a sign that the administration knows better 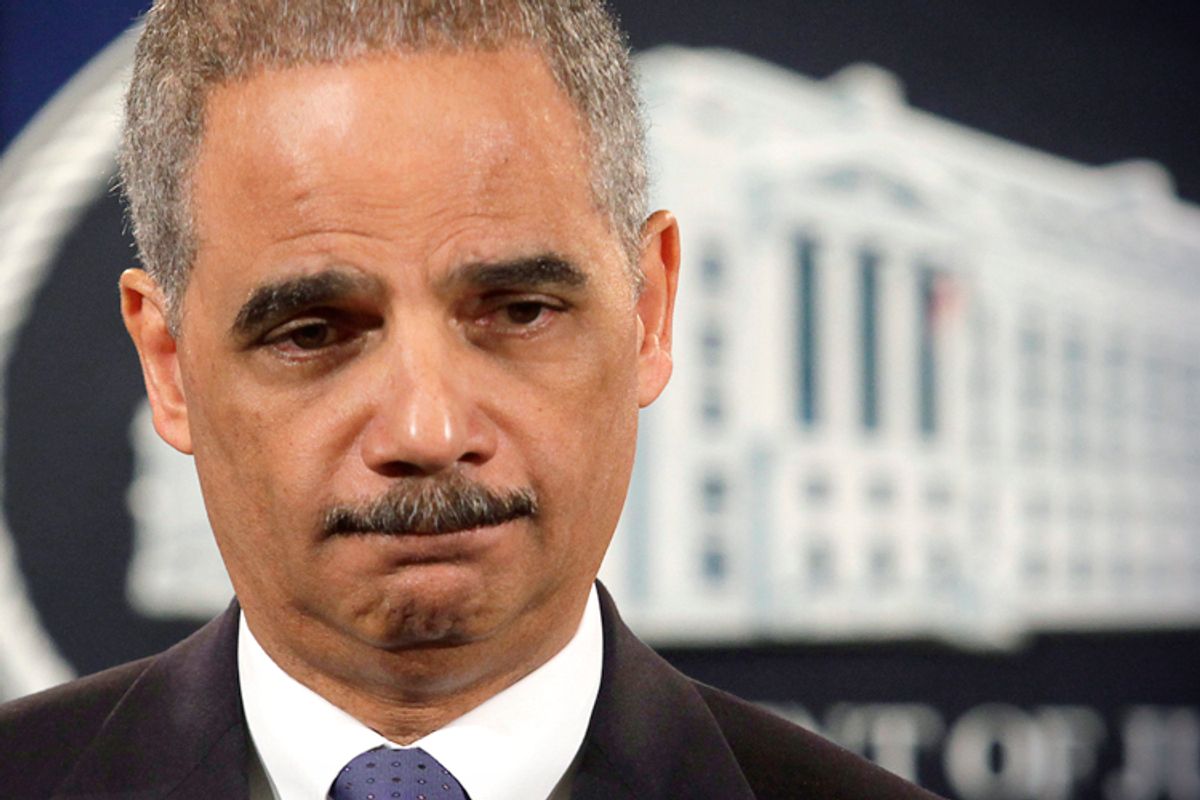 Eric Holder feels bad. The attorney general of the United States has been criticized quite a bit since basically the day he was announced as Obama's pick for the job, but lately that criticism has come from liberals, who are upset with the Justice Department for excessive snooping on journalists. Holder, according to Daniel Klaidman in the Daily Beast, now feels really personally sorry about the whole treating reporters like criminals thing, because he still thinks of himself as a good liberal.

Holder signed off on the search warrant issued for Fox News reporter James Rosen. The warrant justified seizing Rosen's records by claiming that his handling of his source, a State Department contractor, may have constituted a violation of the Espionage Act. The AG apparently did not feel bad about this until he read in a newspaper that he had done so:

But for Attorney General Eric Holder, the gravity of the situation didn't fully sink in until Monday morning when he read the Post’s front-page story, sitting at his kitchen table. Quoting from the affidavit, the story detailed how agents had tracked Rosen's movements in and out of the State Department, perused his private emails, and traced the timing of his calls to the State Department security adviser suspected of leaking to him. Then the story, quoting the stark, clinical language of the affidavit, described Rosen as “at the very least ... an aider, abettor and/or co-conspirator” in the crime. Holder knew that Justice would be besieged by the twin leak probes; but, according to aides, he was also beginning to feel a creeping sense of personal remorse.

Holder's supposed "remorse" is risible. He didn't realize how far he'd gone until he read about what he'd done in the Washington Post? Whoops! I accidentally criminalized news-gathering. (At least someone still reads the paper in print.) It is a bad sign of bubble-inhabiting when an administration doesn't understand the ramifications of its actions until it reads about itself in the press.

"Look, Eric sees himself fundamentally as a progressive, not some Torquemada out to silence the press,” an unnamed "friend" says to the Beast. It turns out that it may be difficult for a supposed progressive to run a massive national law-enforcement apparatus granted practically limitless, unchecked powers to "fight terror" and protect "national security." (Also, turns out professional prosecutors might be overzealous about prosecuting people!)

I will say this, however: Traditionally we have to wait until after a public official is out of power before we get the "I regret the shitty things I did" articles. (Hello, Gen. Powell.) This is at least happening while Holder is in a position to change Justice Department policy and conduct. And indeed, Holder is promising to do so, after meetings with representatives of the press. Even if the "remorse" is more bullshit than genuine, the act of expressing it via anonymous sources in a Daily Beast article indicates that they know they should feel remorse, instead of expressing defiance and crowing about the importance of "keeping us safe."

The Obama administration has a history of being dismissive and contemptuous of criticisms of its actions from "the left." Holder could've treated this flare-up the same way he has (usually correctly) treated every right-wing outrage during his tenure: As a meaningless sideshow. This public display of remorse -- along with the president's recent actions on Justice Department investigations and the CIA's role in the drone war -- at least look like attempts to address serious criticism seriously, instead of as whining from hippies and insatiable complainers.

Still, the broader problem is that the attorney general of the United States has a great deal of power and few impediments to using it. Remorse after abuses of that power is likely the best we'll get from any attorney general until there is a louder and more powerful movement to limit those powers.