Sex in a hospital bed

After my husband's traumatic brain injury, we were forced to find an intimacy we'd never known 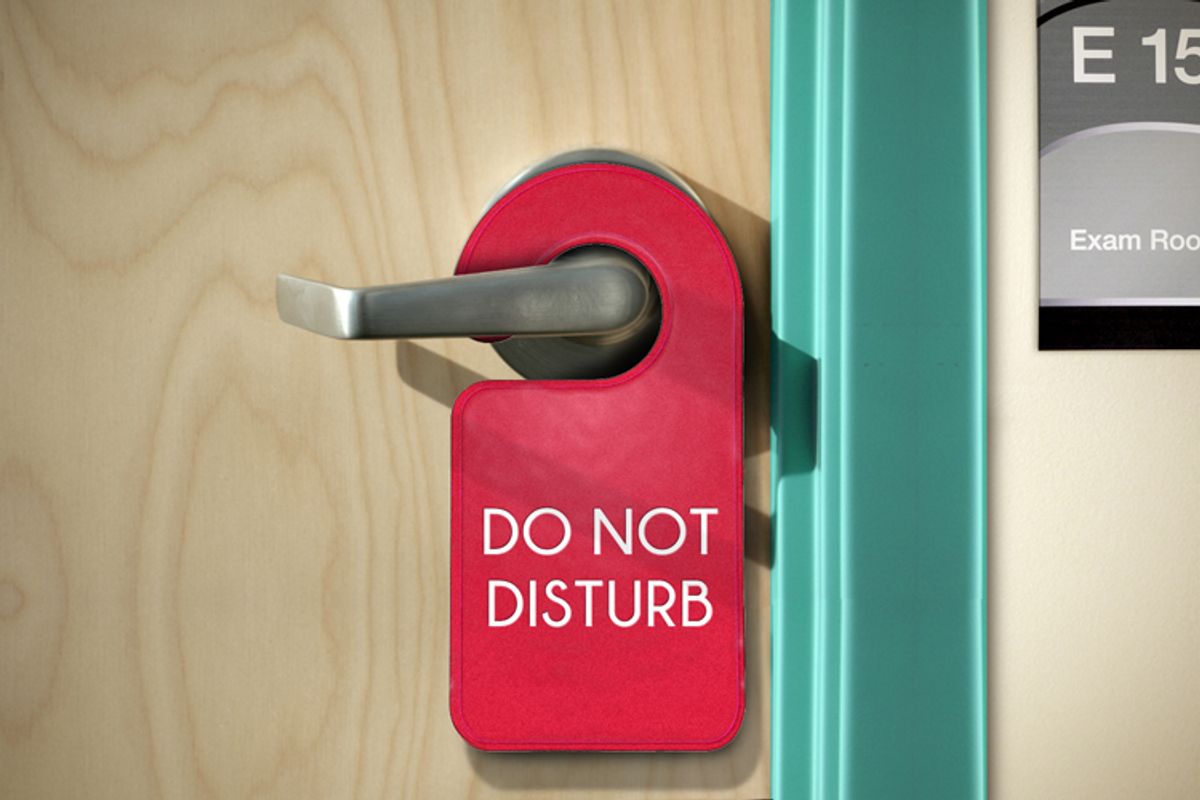 Sex was the furthest thing from my mind when a tree branch struck my husband's face, and he was hooked into life support immediately.

When it was clear he would live, he underwent surgery for his fractured skull, eye sockets and nose, after which he was weaned from a medical coma. For months, all I did was hope and pray. It wasn’t until he was in rehabilitation that I allowed myself to think about how intimacy would work. But now, I felt like a virgin at 33.

Once, when his eyes were still glued shut and he had yet to speak, I slid into the hospital bed with him. He shared a room with a man flown in from Alaska who had hit his head on a cast iron wood-burning stove. The guy was doing surprisingly well, which made me feel depressed. Miles moaned and thrashed underneath wrist restraints; meanwhile Alaska flipped through channels and barked at the nurse for Oxycotin.

There was a vinyl green curtain separating their beds. When Miles had been in intensive care, I had laid my chest across his, pleading for him to come back to me whole. But here I could lie horizontally along him. On an afternoon when he was calm, I asked him to “scoot over.” He didn’t respond. I knew he wasn’t sleeping, but he wasn’t awake.

Feeling stubborn, I warned him, “I’m crawling in,” and balanced myself along the edge, attempting to spoon him. He is not a small man, so when he rolled over, unaware of my presence, I nearly suffocated. I had wanted to arouse him, to see if his parts worked, but had to accept he wasn’t ready yet.

It’s strange what you notice when you’re surviving trauma. You’d think it would be 100 percent bad, a full-on nightmare, but really there’s some funny stuff. Like when the night nurse came in for rounds, saw me in bed with Miles, and clucked that I “wasn’t supposed to disturb the patient.” How Miles’ roomie, Alaska, had piped up after sucking down a cigarette outside, and said, “Aw, let ‘em be. She’s trying to get it on with her man.”

I warmed to Alaska after that. I brought him cupcakes and watched football with him, while Miles moaned, thrashed and slept. You find your pals where you can, when you can. Everybody needs a comrade in times of duress.

A week later, Miles felt a little better, so I tested his vitality again. Alaska had moved on, so for an hour we were roommate-free. His swollen eyes were healing, and with the crack of light from their tiny slit opening, he’d peer sidelong around the room. The way he cocked his head and let his chin guide his sight reminded me of a child playing Pin the Tail on the Donkey, peeking beneath a blindfold.

Alone at last, I closed the door and unhooked my bra. I remember it was a rare sunny day in November, and my back was against the window that overlooked the noisy freeway. I stood where I could tell he could see me, lifted up my shirt, and shimmied. He was sitting up in bed in his hospital gown, his lower half exposed. With feeding tubes and a catheter, I accepted that, despite my flashing, he might remain flaccid.

But when he grinned goofily and said, “Do that again,” I was encouraged. I breathed relief that my red-blooded American boy was still inside somewhere. I felt giddy, and continued my teenager flashing antics, noting how it didn’t have any effect on his genitals. “He almost died,” I reminded myself. I decided I needed to give it more time.

We had enjoyed a stable routine of intimacy before the big leaf maple tree front-face crashed into his skull. When I think back on it, I’m positive his tight build from all the tree climbing inspired the of-late frequency of our lovemaking. That and our children were both finally sleeping through the night.

I remember he had been so strong he could hold himself in plank while I clambered during our congress. He was my jungle gym, and I was a playful woman-child. Our libidos were dangerously healthy. I felt ripe for a third baby.

But then he got knocked down and everything changed. A spicy non-mom friend had a theory about married sex that sounded to me more like a Nike commercial than feminist theory. “Why not just do it when they want to?” she’d say about having sex with your husband. “Once you get things started, you rarely regret it, and everyone’s always happier afterward.”

I remember resenting her easy attitude when I was pregnant and nursing, but recalling it now, it seemed brilliant. I desperately wanted to see him satisfied, or just turned on. Selfishly, I needed to know what my chances were at experiencing sexual pleasure with my husband. I can’t bear to think I’m the only woman to ever be troubled over the possibility of a lifetime of platonic love.

I had two stock answers for when people asked what it was like when we got him home. One was that Miles “woke up” talking as if he were a surf-bro. His voice was nasally because of the stints in his nose, and words emerged singular and deliberate. His affect was as if he had taken a night’s worth of six-foot bong rips.

The other explanation I reserved for a few non-judgmental friends. I told them I felt the doctors had released unto me a zombie. With one eye permanently dilated, and 60 staples stitched across his forehead, he looked and spoke like Frankenstein's monster. I used to shudder at his response when people asked him how he felt.

He would say how he’d been “whacked” in the head and that he was “permanently brain damaged.” In my care was a lumbering man whose thinking was on furlough. What was I supposed to do? Wasn’t nurturing a marriage and small children hard enough?

Women get curious. One friend at dinner asked if we had “had sex yet.” I demurred on the subject, because, of course, the truth was no, we hadn’t. I had trouble articulating with dignity how much I wanted to know if his downstairs department operated. I wanted to be respectful of his injuries, but true to my own needs.

That’s another not-funny ha-ha thing about trauma. In theory, you ought to be able to share your fears with friends at dinner. They care, they really do. But to share your fears means admitting the horror is real, and to survive, sometimes you have to pretend things are fine.

At home, Miles liked to nap in our spare room downstairs. It was cold down there, and quiet. One day when the kids were gone, I interrupted my job search to rest by his side on the double bed. To our right was a rocking horse. To our left was a talking Elmo chair.

Miles wore a drawstring sweatpants suit, the only item that fit after losing 40 pounds in six weeks. He was face down with his long legs draped off the end. I remember I rested, face up, staring at the cracks in the ceiling.

He acknowledged me by resting his hand on mine. “Come closer,” he urged in his flat monster tone. He turned over and I peered at his groin. If my eyes could be trusted, I noticed a slight bulge. Then, for all my aggressive behavior at the hospital, I became shy.

I closed the drapes and switched off the bedside table light. Was this really happening? I was more curious than stirred. I ached for him to be virile, and yet, I knew there was process in healing. He waited for me to initiate. I peeled off his shirt, and untied his draw-string sweats. I removed my pants.

His body felt different, like a stranger. A flash of his wearing incontinence pads at the hospital struck me as I noted how his muscles had become flabby. It had been almost two months since we had been physical. Not unheard of for couples, but for us, a lifetime had transpired.

Offering myself up was something I knew I had to do. My husband didn’t murmur my name, not did I dirty into his ear. Under the covers our socks stayed on. It was hurried and unromantic, but it was a start.

I knew I had done the right thing when afterward he became vulnerable. “I’m sorry,” he whispered. “For everything.” Years later he wouldn’t remember the occasion, but I would. It was a better first time than any I could ever remember.

S.E. Cannon is the pen name of a writer and mother living in the Seattle area.