The oddest moments from Will and Jaden Smith's father-son interview 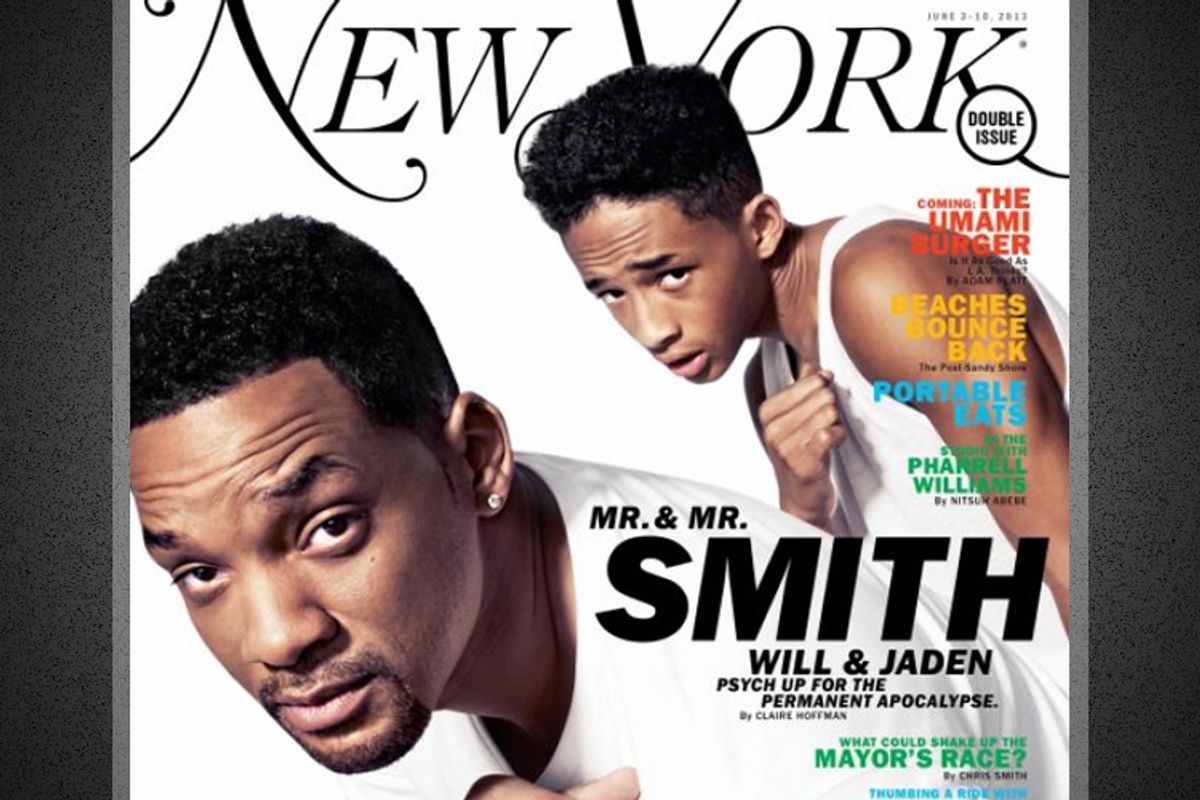 Will and Jaden Smith aren't just father and son -- they're costars in the upcoming M. Night Shyamalan film "After Earth," and fellow interview subjects in the new issue of New York. The cover subjects open up about their family, whether or not they're religious, and how parenthood is like slavery in an interview that's unusually candid -- and revealing of just how hermetic is the bubble the Smith family occupies. It doesn't seem anyone's told Will Smith "no" in a very long time, leading the "Wild Wild West" star to see himself as a radically independent thinker informed by the world's entire intellectual tradition. He's carrying that tradition on with his 14-year-old son. Here's what we learned:

The Smiths are not, as has long been rumored, Scientologists.

Are both of you religious?
Will: No, we are students of world religion.

Seems like everyone’s excited about the idea that you might be religious.
Will: We respect all [religions].

Smith père has devoted his study of "patterns" ("At heart, I'm a physicist") to studying who wins best actor Oscars (he's been nominated twice, but never won).

Will: Like for Best Actor Oscars. Almost 90 percent of the time, it’s mental illness and historical figures, right? So, you can be pretty certain of that if you want to win—as a man; it’s very different for women. The patterns are all over the place, but for whatever reason, it’s really difficult to find the patterns in Best Actress.

Will Smith says that he runs an "efficient" household, which prompts this question and the revelation that he is constantly stocked up on paint:

Like staffing?
Will: No, just how serious we are about how the microphone at the piano has to be on and the recorder has to be ready to go for when somebody gets an idea. The paint supplies have got to be kept up—you know, you cannot go to paint something and a color’s empty.

Is it true that you alphabetized your laser discs?
Will: Yeah, I’m very, very serious about systems supporting creative inspiration.

Will Smith's wife, Jada Pinkett Smith, is repeatedly alluded to as the power within the family and far more domineering and savvy than Will.

Will: We don’t own our children, you know. They own themselves. Not to go too far into that, talking about slavery concepts and how the black community is carrying those …
Jaden: If we started going down that road, Mommy would, like, burst into this room.

Will and Jada hope eventually to write a book -- possibly inspired by Will's love of thought both ancient and modern:

Jaden: If I’m with my friends, and they’ll be like, “Oh, hey, where’s your dad? Let’s go say hi.” And I’ll be like, “Oh, no. He’s watching hours and hours of TED Talks just … Dude, don’t go in there.” Last time I went in there, he said, “Jaden, so the art of telling stories is an art that you really have to learn. I want you to read 'Aesop’s Fables.'” “Dad, I’ve read 'Aesop’s Fables' three times.”

But although Jaden has been spending less money of late, he says, he's not entirely devoted to the loftier things to which his father spends so much time paying attention:

So, Jaden, you like spending the money you earn?

Jaden: Well, when you say it like that, not really. There was a time in my life when I’d go to Cartier, like, every weekend for like a month.