If Kathryn Ruemmler wanted to be taken seriously, she should have gone barefoot 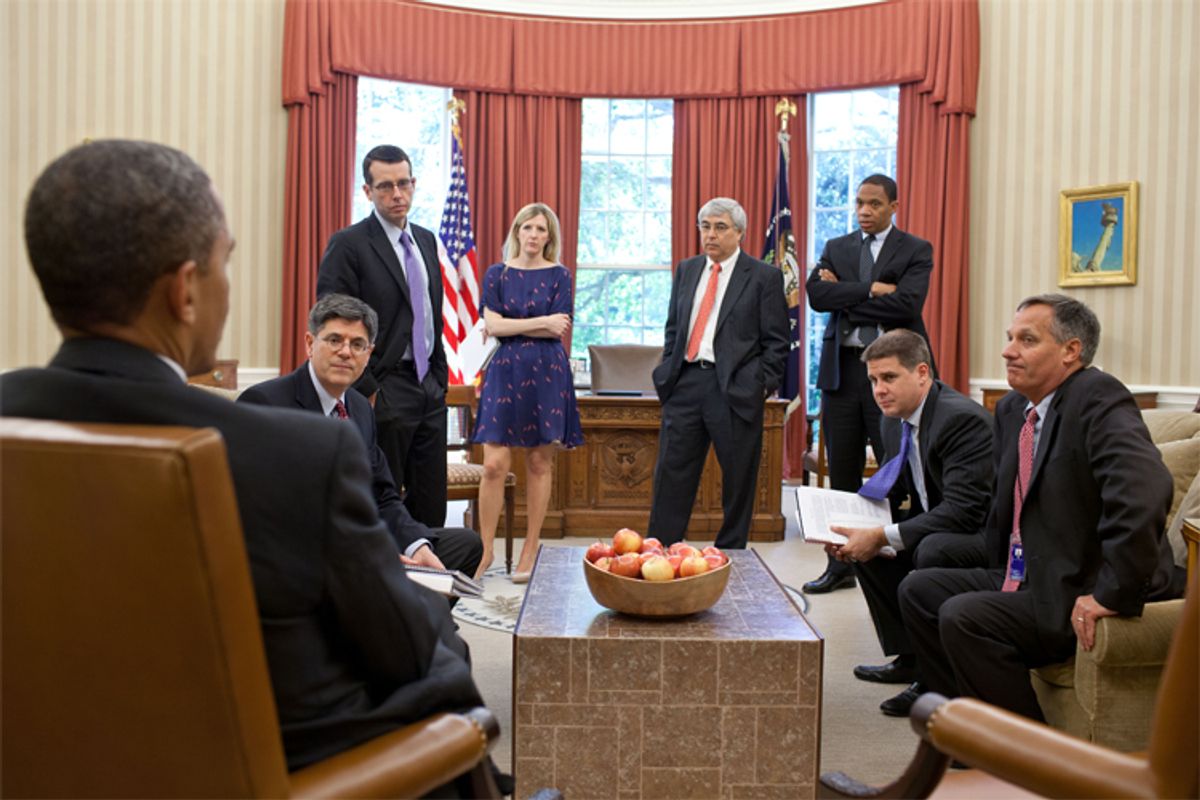 Here is a tale of being a woman in public life in two tweets by Washington Post reporter Juliet Eilperin: “Read what @PhilipRucker and I wrote about Kathy Ruemmler, who went from an outsider to Obama's chief protector.” “And then, read about Ruemmler's fabulous shoes.”

Ruemmler is the White House counsel. According to quotes in the first piece, pegged to the controversy over what she did and didn’t tell the president about the IRS inspector general report, she is a “lawyer’s lawyer,” “very deliberate” and “one of the most cool-headed people in the entire White House.” There is also room in the first piece for Ruemmler’s “legendary” shoe habit -- in 2006, she wore pink stilettos while prosecuting Enron! -- but two paragraphs were simply not enough. Hence the second story, dated five days later, devoted entirely to divulging that Ruemmler owns one pair of shoes characterized by “a jeweled paisley pattern; another is black and strappy.” Guys, there is a regular Carrie Bradshaw in the White House.

But wait, you say. If Ruemmler didn’t want the Washington Post to talk about her shoes while she’s in the midst of White House “scandals,” why did she wear them? A truly serious person would tiptoe through the West Wing barefoot. Could she arrange for some office-appropriate sackcloth and ashes?

On my personal outrage scale, this ranks around the same place as the same paper's describing congresswoman Kyrsten Sinema as “lecturing, hectoring, defensive, accusatory, pouty and curiously repetitive,” and just below NPR recently scrubbing its incredulousness that Sen. Kirsten Gillibrand could both have a "girlie" voice and fight sexual assault in the military -- at the same time. It registers a lot below Vogue pressing Gillibrand again and again about how she lost weight. (The true highlight of Jonathan Van Meter’s 2010 story was when he noted that the weight loss would help Gillibrand “no doubt remain attractive to her husband of nine years, who is two years younger than she is.” Alternative headline: Sexy cougar gets back her beach body!) But it registers nonetheless. The Washington Post is still one of the country's major papers, there are still far too few women in positions of power in the city it mainly covers, and at a time when Ruemmler is in the spotlight for whether she did her job right, the shoe chatter is simply undermining and trivializing.

A recent study conducted by Name It, Change It asked voters to assess hypothetical male and female candidates. Hearing descriptions of the female candidate's appearance "had detrimental impacts on her candidacy ... even appearance coverage that purports to be neutral or complimentary damages the woman." It cost the male candidate nothing. That's probably because the average American still has trouble believing that women can both participate in what Garance Franke-Ruta termed "the system of beauty" while working in "the system of power," such that a woman is more harshly judged for a leisure habit while a man's extracurricular habits are par for the course. There is nothing wrong with Ruemmler straying from the sparrow-like business casual norm of Washington, to an extent that President Obama has apparently teased her about, but a description of a pair of shoes she wore seven years ago doesn't belong in a national newspaper's profile of her.

It was once, reluctantly, my professional responsibility to come up to Condoleezza Rice at a gala just after she ceased being secretary of state and ask her what she was wearing. But I worked for a fashion trade paper. Eilperin is the White House reporter, and as I write this, the shoe story is the third-most-read on the Washington Post’s politics section. (How much of that is referrals from furious feminist tweets, one of which I issued, I cannot know.) Meanwhile, that shoe story, which Eilperin impressively carried on her own, is sadly undermined by the fact that the only photographic proof of Ruemmler’s alleged fabulousness is her wearing muted beige heels.

There is something else that is interesting about that photograph: There are eight people in the room, and Ruemmler is the only woman. Indeed, the first story notes that Ruemmler operates in a White House in which “some women complained that they felt marginalized” and that she is “one of the few women who has been able to break into the club.” She has apparently done so on her own terms, professionally speaking, which can't be easy. So here is a proposal for the politics reporters who want to add color and "fabulousness" to their prose: How about we issue a moratorium until there's more than one woman in the room, and see what happens?