One man was seriously injured in the blast, but the resulting chemical fire did not endanger nearby residents 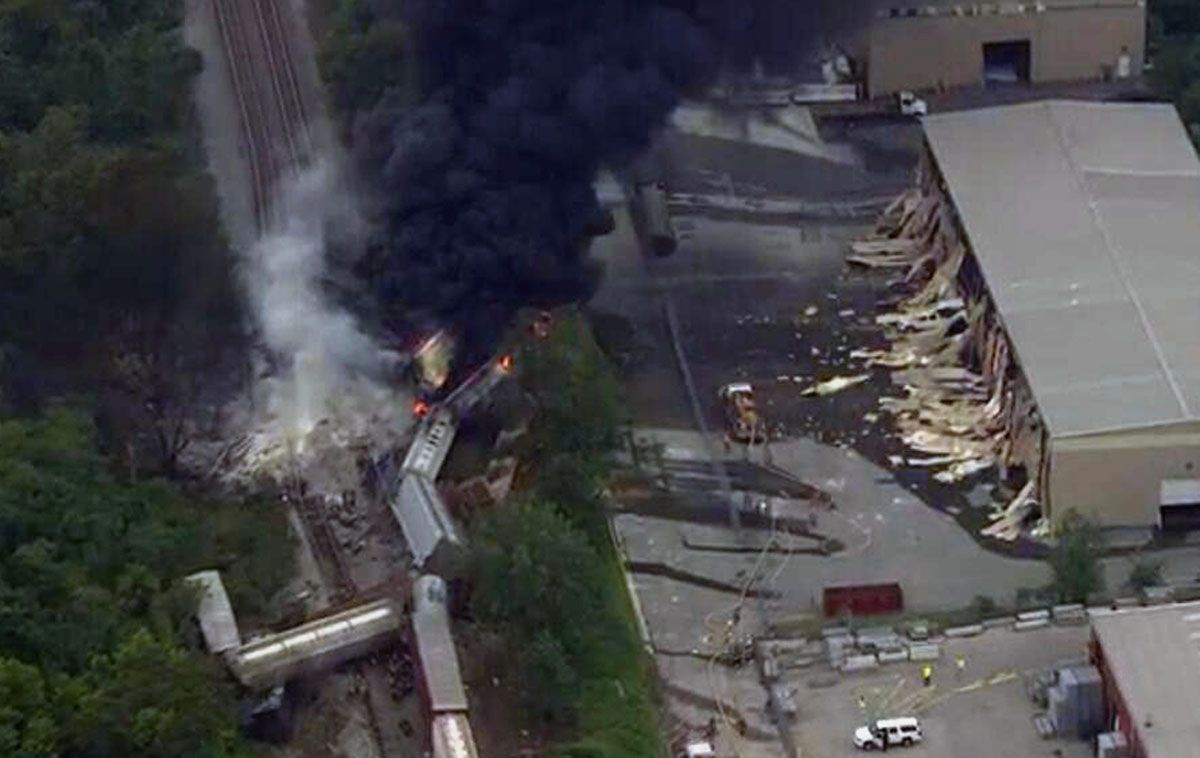 ROSEDALE, Md. (AP) — Federal investigators planned to spend the coming days piecing together what caused a chemical-carrying CSX train to collide with a garbage truck, derail and explode at a rail crossing in suburban Baltimore.

In the third serious derailment this month, a dozen or so rail cars — at least one carrying hazardous materials — went off the tracks around 2 p.m. Tuesday in Rosedale, Md., a suburb east of Baltimore. Several rail cars caught fire, sending a plume of black and gray smoke into the air that could be seen for miles, and an explosion rattled homes at least a half-mile away.

While local officials breathed a sigh of relief that only one person — the garbage truck driver — was seriously injured and that the chemical fire didn't pose a greater risk to nearby residents, some areas of inquiry for investigators were beginning to take shape.

Robert Sumwalt of the National Transportation Safety Board said late Tuesday that the collision occurred at a private crossing where the only marking was a stop sign. He said it wasn't clear why the truck was crossing the tracks or whether it was authorized to be there.

A team of 15 NTSB investigators was on the scene and would likely remain there for up to a week, Sumwalt said.

Both the NTSB and the Federal Railroad Administration are investigating Tuesday's crash of the 45-car train en route from Selkirk, N.Y., to Waycross, Ga. It contained a variety of products from lumber to printing paper.

Police also planned to investigate the circumstances that led to the track collision, but it was not clear what, if any, charges the truck driver or anyone would face, said Baltimore County spokeswoman Elise Armacost.

Gary Sease, a spokesman for CSX Transportation Inc., said four of the cars believed derailed carried terephthalic acid, which is used in the production of plastics and polyester, among other things. He said it is not listed as a hazardous material.

It was, however, the chemical that exploded as a result of the derailment, Sumwalt said.

A hazardous materials team responded, but Baltimore County Executive Kevin Kamenetz said at a news conference that no toxic inhalants were being released. Officials did not order an evacuation.

Toxic inhalation hazards are a worry when trains carrying hazardous materials derail. They include chemicals like chlorine, which killed nine people after a derailment of a Norfolk Southern train caused a release of the toxic gas in South Carolina in 2005.

By nightfall Tuesday, the hazmat team had left, meaning there was no more danger posed from the chemicals in the rail car, Baltimore County police Capt. Bruce Schultz said.

Dale Walston said he lives about a half-mile away and that he thought he could smell chemicals after the explosion Tuesday.

"It shook my house pretty violently and knocked things off the shelves," he said in an email to The Associated Press.

The face of one warehouse near the train tracks was blown off.

Even hours after the blast, the thick plume of black smoke could be seen for miles and had drifted and covered the eastern part of Baltimore. Later, the smoke that was left had lightened considerably, changing from black to gray, and Schultz announced early Wednesday that the fire was called under control late Tuesday just before midnight. He said CSX had moved unaffected cars away from the derailed cars and fire department operations had been reduced to a fire watch.

An Amtrak spokeswoman said its Northeast Corridor passenger service was not affected.

CSX's Sease said in an email that one of the rail cars in Tuesday's derailment was carrying sodium chlorate, which the Department of Transportation classifies as a hazardous material. However, Hohman said the chemical was not in either of the cars that were still burning into the evening. The bleaching agent is used in making paper.

Nick Materer, an Oklahoma State University chemist, said sodium chlorate, when combined with fuel, makes a more volatile mixture. "When you mix them together and add fire, they go boom," he said in a phone interview.

Materer said the chemical is usually shipped as a white powder but it can also be in a liquid solution. Either way, he said, the fumes can irritate the lungs if inhaled.

Exactly what triggered the explosion was being investigated, and Hohman said firefighters told residents of about 70 nearby homes that they could leave if they wanted to and shelter would be provided.

While one of the cars still burning late Tuesday was carrying terephthalic acid, the substance used in making plastics, another was carrying fluoroacetic acid, Hohman said. Although county officials played down the health risks posed by the burning rail cars, the National Institutes of Health website describes fluoroacetic acid as an "extremely toxic" constituent of many poisonous plants that is used to make products that kill rodents. It produces poisonous gases when burned, according to the NIH.

Materer said the gases contain chlorinated organics. He was less familiar with terephthalic acid but said it, too, contains chlorine.

Kevin Lindemann, 29, a salesman for industrial pipe supplier Baltimore Windustrial, near the tracks, said he and about 10 co-workers felt the ground shake, ran to a window and saw several rail cars on their sides and flames he estimated at 50 feet high.

"You could feel the heat as soon as you walked out the door," Lindemann said.

"We kind of panicked pretty quick," he said. "We didn't wait around to see what was happening. So as soon as we saw the flames I took a quick picture and got in my truck and drove away."

Everyone left the building and drove several blocks away. Then they heard the explosion, five to 10 minutes after the derailment, he said.

"Even like three blocks away, it was loud. I mean, it just about took you to your knees," Lindemann said.

Derailments have done great damage before in Baltimore, a city with countless train tracks. Twelve years ago was the derailment and chemical fire in Baltimore's Howard Street tunnel. Rail cars burned for five days underground in July 2001. Portions of downtown were closed and rail traffic across the U.S. was affected for days.

Also hit by a serious derailment this month was Bridgeport, Conn. On May 17, more than 70 people were injured when a commuter train went off the tracks. The eastbound train from New York City derailed during evening rush hour, came to a stop and was struck about 20 seconds later by a westbound train. In Rockview, Mo., on Saturday, a cargo train crash injured seven people and destroyed a highway overpass, which could take a year to repair.

Despite the high-profile railroad accidents, the overall number of such crashes has been declining industry wide and for CSX over the past decade.

In each of the past five years, CSX has reported more than 100 deaths in accidents and incidents involving the railroad.

CSX, based in Jacksonville, Fla., operates over 21,000 miles of track in 23 eastern states and two Canadian provinces.