They're crowding digital music services like Spotify and Rhapsody, and threaten their future business 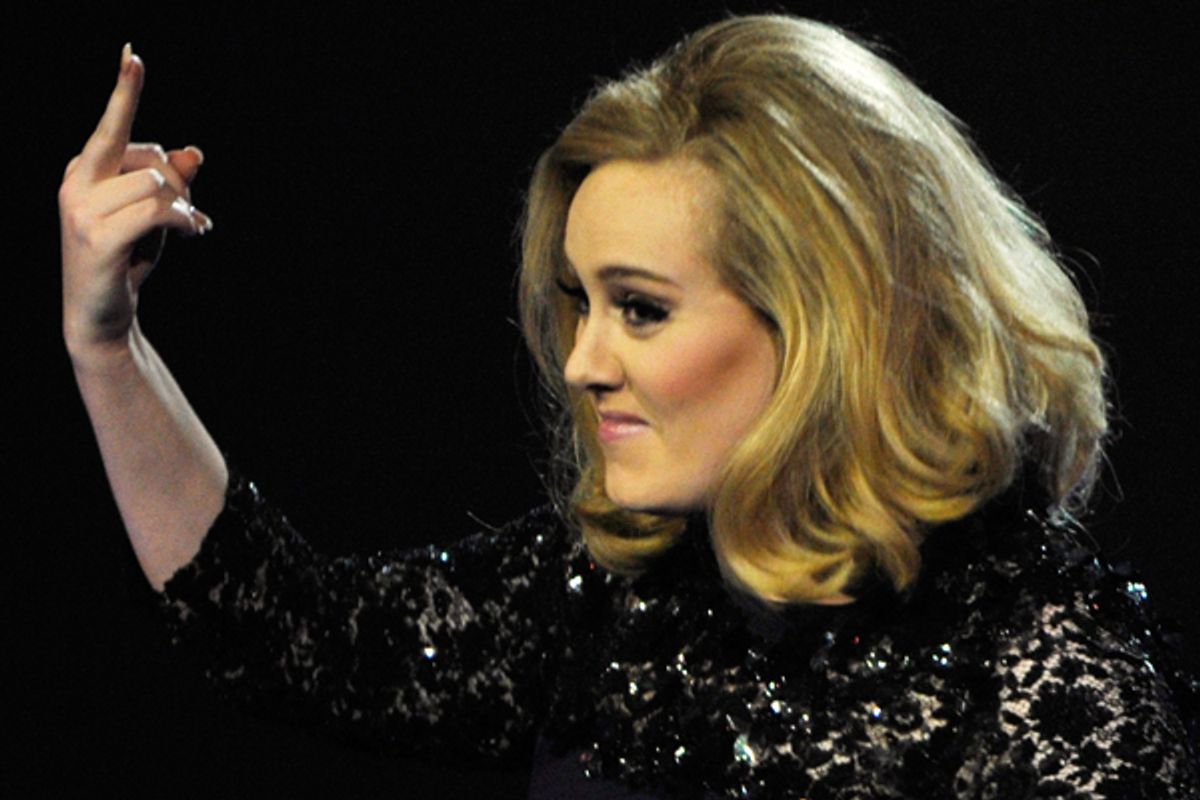 LOS ANGELES (AP) -- There are about 600 versions of Adele's Oscar-winning song "Skyfall" on the Spotify subscription music service. Not one of them features Adele.

Adele's label, XL Recordings, keeps her music off of all-you-can-listen subscription plans until download sales peter out. In the meantime, copycat artists fill the void, racking up royalty revenue, often before customers realize they've been listening to someone else.

Alice Bonde Nissen found that out the hard way. She once paid 99 Krone ($17) a month for Spotify's premium service in Denmark. Bonde found a version of "Skyfall" and mistakenly clicked on a "follow" button to become a fan of GMPresents and Jocelyn Scofield, the name for a cover-song specialist with some 4,600 Spotify followers. Scofield, who didn't respond to a message seeking comment for this story, has the most listened-to cover of "Skyfall" on the service.

"When I found out ... that I couldn't find the original `Skyfall' (and some other hits) I decided to quit Spotify," Nissen says.

Thousands of cover songs crowd digital music services such as Spotify and Rhapsody and listeners are getting annoyed. The phenomenon threatens the growth of these services -which have millions of paying subscribers- and could hold back the tepid recovery of a music industry still reeling from the decline of the CD.

Streaming services put a world of music at listeners' fingertips with millions of tracks, everything from the latest pop hits to age-old violin concertos. For a flat fee - usually about $10 a month in the U.S. - users can listen to as many songs as they wish. The music resides on the provider's servers and gets transmitted, or streamed, to subscribers as they listen on smartphones, tablet computers and PCs.

The services allow users to store songs on their devices as long as they keep paying. But because such a vast selection can be stored online in the so-called cloud, when listeners search for popular songs, they often find oddball renditions.

Cover songs are perfectly legal in the U.S. and have a long tradition in the music industry. Some covers are even more famous than the originals. Which do you think of first, Aretha Franklin's soaring 1967 version of "Respect," or Otis Redding's original from two years earlier? How about Jimi Hendrix's funky 1968 rendition of "All Along the Watchtower"? Does anyone even remember that Bob Dylan wrote and sang it in a release six months before?

The difference today is that anyone with a computer, a microphone and an Internet connection can create and distribute a cover. New technology, from affordable digital recording equipment and sound-mixing programs to convenient online services are making homemade covers an easy and profitable endeavor. And sing-it-yourself shows such as "American Idol," `'The Voice" and "The X Factor" are fueling the notion that anyone with a decent voice can be a star.

Spotify's head of development and analysis, Sachin Doshi, acknowledges that finding covers instead of originals can be frustrating. "We recognize it's a problem we haven't fully solved yet," Doshi says.

Jon Maples, Rhapsody's vice president of product management, says customers have asked that cover songs be removed and the company has targeted 10,000 for deletion. "It just clutters the experience," he says.

Some independent artists insist cover songs are a fast way to achieve fame. Kina Grannis says covers are helping her build a fan base. The 27-year-old Los Angeles-based singer won the 2008 Doritos' Crash the Super Bowl contest. As part of the competition, fans were asked to vote for an aspiring musician's music video. The winner got to air their creation before 100 million viewers on game day. Grannis says she wouldn't have earned enough votes to win if she hadn't seeded her YouTube channel every day with covers of artists like Jason Mraz and Death Cab for Cutie. Many of her current followers on YouTube stumbled upon her while searching for originals.

"It doesn't feel bad that they were looking for someone else, because they didn't even know I existed," says Grannis, whose original song video "In Your Arms," has racked up 9.2 million views. "They're not going to search for Kina Grannis if they've never heard of you."

Winning the Doritos contest earned Grannis a recording deal with Interscope Records, but she opted out because she believed she had enough of an online following to make and sell music on her own.

U.S. copyright law says cover artists don't require the original artist's permission, as long as they get a license, pay royalties and let the original songwriters release their version first. Streaming services like Spotify are obligated by law to handle songwriting royalties on behalf of cover artists.

Obtaining a license to record a cover is easy and inexpensive. Services like Google Inc.'s Limelight, which launched in late 2009, offer commercial song licenses to anyone who fills out a form. For each song they cover, artists pay a $15 fee. By law, Limelight also charges $9.10 in advance for every 100 downloads the artists may sell. TuneCore, which launched in 2006, distributes songs on outlets like iTunes for $10 per track. Selling a couple hundred tracks - because of consumer confusion or otherwise - can earn cover artists enough money to pay the bills.

The hurdle is so low for the average amateur that once a hit song comes out, it's covered quickly. Take "Suit & Tie," a Justin Timberlake song released by RCA Records in January. There are already around 180 covers on Spotify in addition to Timberlake's version.

Since Adele's "Skyfall" was released in October, it has sold more than 1.9 million copies in the U.S. Cover artists sold more than 54,000 copies, according to Nielsen SoundScan. The top-selling cover was produced by Movie Sounds Unlimited, a subsidiary of German music publisher BMG, and sold over 9,800 units.

The singer on the Movie Sounds Unlimited version of "Skyfall" imitates Adele's official version down to the brassy intro and the unique way the British diva rolls over the sound "L" like an "O" when she sings "Let the sky fall when it crum-bows."

On iTunes, 35 people have reviewed the album containing Movie Sounds Unlimited's version of "Skyfall." Half of them felt the purchase was a dud, giving the album a one-star rating, the lowest in the electronic store.

"Adele's voice is perfect for this song, not whoever sung it for this album," writes one reviewer.

"Don't waste your money. None are as good as the originals," writes another.

While some people make covers to get discovered, others seem to be in it to trick buyers and make a fast buck. A recent search for popular artists on Spotify reveals plenty of me-too bands who pick deceptive artist names like the "Bruno Mars Tributors" or song names like "Firework (As Made Famous By Katy Perry)." The artwork and graphics used for their songs are sometimes a mirror image of the originals.

The producer behind that Katy Perry cover says he's not out to deceive.

"It's not about trying to live in somebody's shadow or faking people out," says Michael Vail Blum, the Sherman Oaks, Calif.-based owner of Titan Music Inc. Blum says the cover song business is about taking great material - sometimes written by someone else - and making a great recording. Technology has just evened the playing field for artists who aren't signed to major labels, he says.

But sounding similar is often the whole point, explains a person familiar with how the subsidiary of music publishing giant BMG works. The executive spoke on condition of anonymity because he wasn't authorized to speak publicly about it. The sound-alike can take the place of the original for businesses like malls and restaurants that want to use the song but can't afford the original. For example, TV show "Two and a Half Men" licensed Movie Sounds' sound-alike of "Gonna Fly Now," the theme song from the movie "Rocky," for an episode from 2010.

It's a big business, with millions of dollars invested, and Movie Sounds' parent Countdown Media has a catalog of more than 50,000 covers.

Digital music stores have made knock-offs profitable in a way that wouldn't be possible with physical stores.

When iTunes launched in 2001, bands like The Beatles, AC/DC, Metallica and Kid Rock refused to sell their music online, so cover artists swooped in to profit from the digital demand. Titan Music cover band Led Zepagain was one of them. Standing in the place of originals in search results, sound-alike songs made hundreds of thousands dollars when consumers bought their songs.

"A cover song does not have to be an entirely original take on a version," he says.

Brian Felsen, the president of CDBaby, another independent song distributor, says that while a gray area exists today, the deluge of covers can't really be stopped.

"Everybody polices it as much as you can," he says, adding that his staff attempts to prevent "blatant" knock-offs that copy cover art and use other deceptive practices from being distributed. But he acknowledges that having so many covers isn't good for consumers. "It may not be illegal or immoral, but it may not be the best thing for society at large either."

In the face of this growing tide, the mainstream music industry is jumping on for the ride.

Warner Bros. Records artist Michael Buble, whose career was made covering singers like Frank Sinatra and Louis Armstrong, worked with a band that got its start doing covers, Boyce Avenue, to cover his original single, "It's a Beautiful Day." Buble introduced their version in a video released in April that links back to his original.

The exposure is worth any sales lost to Boyce Avenue's cover, according to Kayla Isenberg, Warner Bros.' senior director of interactive media, who reached out to Boyce Avenue on the partnership.

"The trade-off is being able to use their avenue to open up Michael and his music to this YouTube generation," she says, pointing to their 3 million subscribers and their YouTube channel's 917 million views. "We're getting massive publicity."