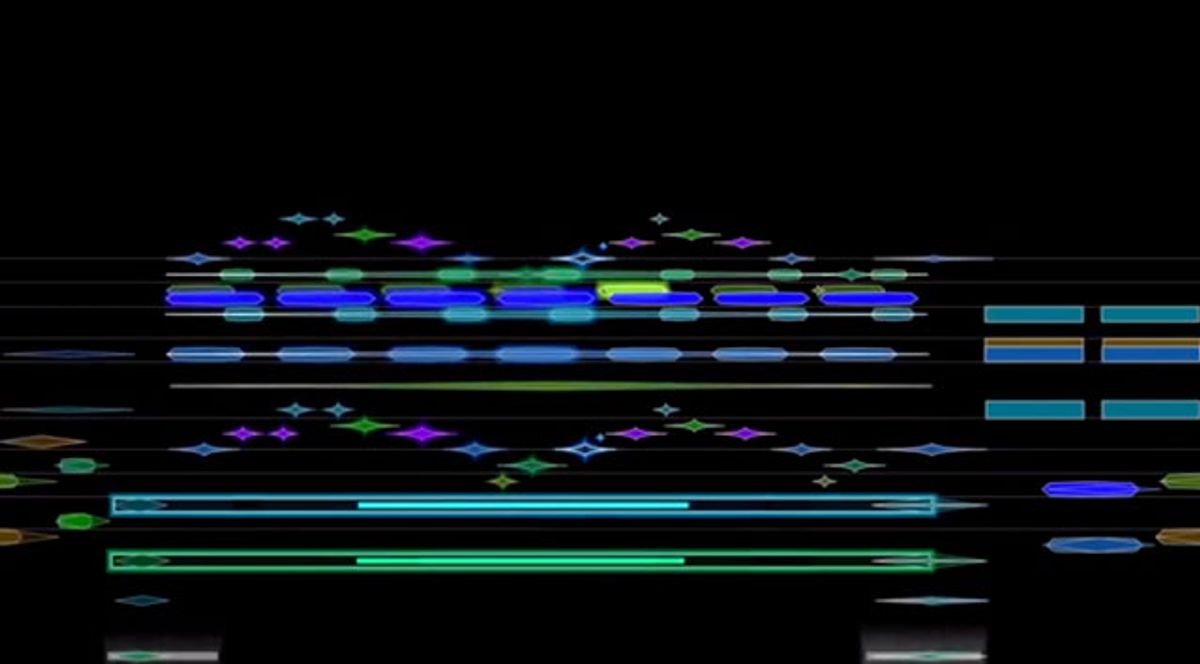 This article originally appeared on Hyperallergic

The performance that almost incited the well-heeled of Paris to a ravenous riot is celebrating its centennial. Even now the pounding score of Igor Stravinsky’s The Rite of Spring that debuted on May 29, 1913 is unnerving with each instrument falling over a complex tumult. While The Rite of Spring is today mostly celebrated as a musical event, it was as much a visual one, with a shocking flat-footed dance, a stage set featuring an eerie painted backdrop, and grim folkloric costumes. It’s appropriate then that one of the most transfixing of the projects marking the 100 year occasion is a digital visualization of the piece.

Created by Stephen Malinowski, a composer and software engineer, the animation attempts to illustrate all the complications that are happening in Stravinsky’s score. The Californian has been working on this type of visual music for decades, sparked by an epiphany involving Bach and LSD, which developed into his Music Animation Machine in the 1980s. As he writes: “Music moves, and can be understood just by listening. But a conventional musical score stands still, and can be understood only after years of training. The Music Animation Machine bridges this gap, with a score that moves — and can be understood just by watching.”

Some have attributed this to the ballet choreography of Vaslav Nijinsky, who just before The Rite of Spring had caused another scandal with sexual, animalistic choreography in Debussy’s The Afternoon of the Faun. The choreography for The Rite of Spring was no more reserved, and had dancers slapping down their feet and hunching in awkward poses. The sets and costumes by Nicholas Roerich weren’t any warmer for the audience, with his affinity for folklore and the occult aggressively asserting itself in the traditional garb and broad backdrops with strangely shaped trees. (His uncanny landscapes would influence the foreboding vistas of H.P. Lovecraft’s At the Mountains of Madness.) The plot, or what there was of one, centered on a series of pagan rituals culminating with a girl being chosen as a sacrifice, who is then condemned to dance herself to death.

Whatever provoked the fashionable audience, it turned them, by all reports, into an unsettled horde. The dancers were unable to hear the music beyond the yelling between two factions of those against and for the performance. As the conductor Pierre Monteuxrecalled, “many a gentleman’s shiny top hat or soft fedora was ignominiously pulled by an opponent down over his eyes and ears, and canes were brandished like menacing implements of combat all over the theatre.” Puccini who saw it that summer proclaimed: “Ridiculous choreography, the music an absolute cacophony, but strange not without a certain talent. But in all in all it’s the work of a madman.”

Yet there’s something that sticks in the soul with The Rite of Spring, and it’s endured as a defining musical radicalism of the 20th century, even if that initial visual shock has faded. Check out Malinowski’s visualization and see if you feel within the complex chaos of its score: