Commissioner Ray Kelly's NYPD has been deeply corrupt and criminal. Now the city elite want him to run the town 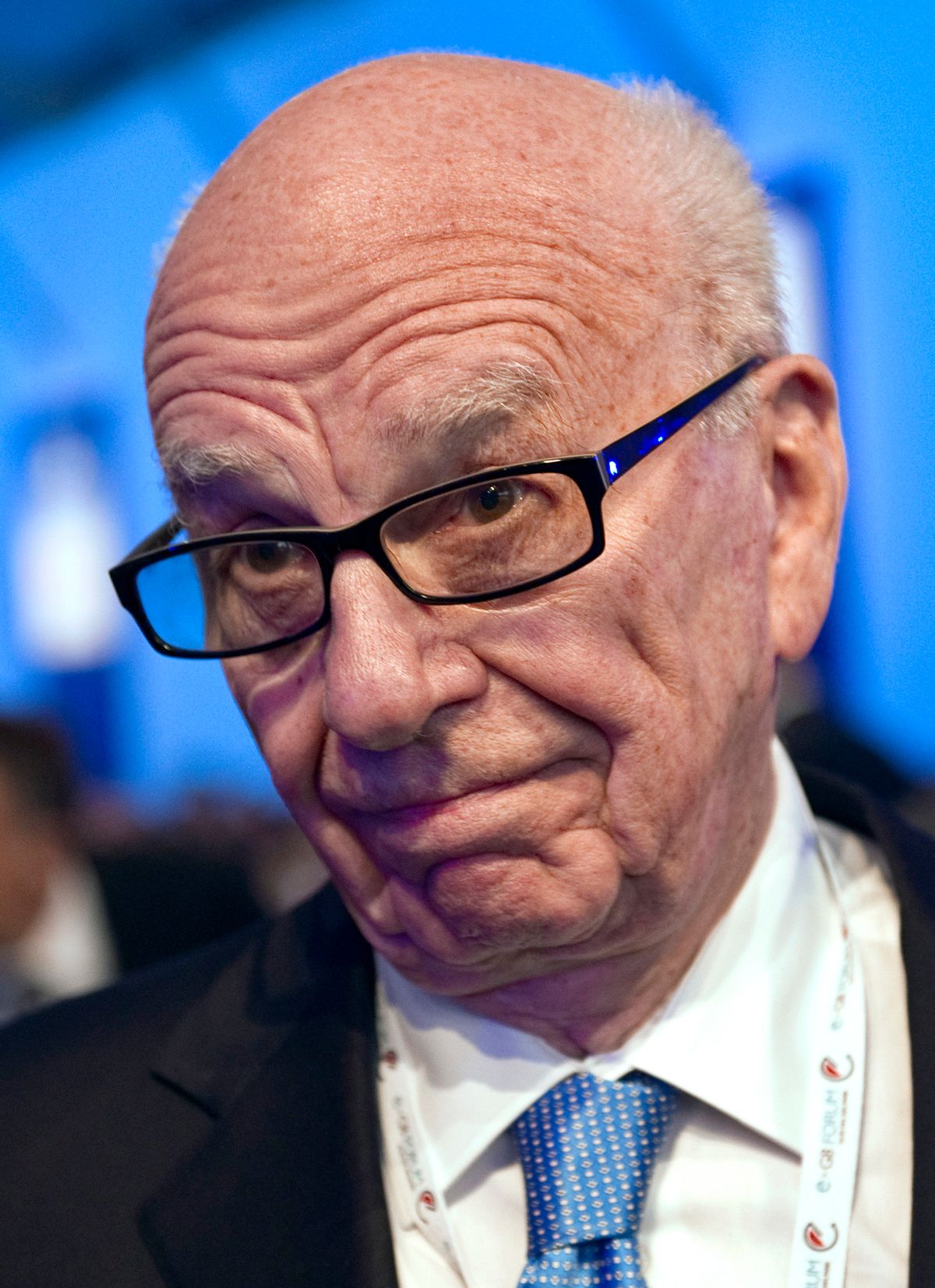 Ray Kelly is the New York City police commissioner. Some people (it's not clear whether Kelly is one of these people) would like him to be the town's next mayor. Among those people: Rupert Murdoch, who owns two local daily newspapers and one nationwide cable news television station. Murdoch buys newspapers because he loves newspapers, and one of the things he loves most about newspapers is that publishers can use them to influence elections. (Murdoch has had more success with this in the UK, where his papers were instrumental in election of Prime Minister Tony Blair.)

Here was Murdoch this weekend:

This week, a Republican pollster released the result of a poll saying that Kelly "can win," which is much more than any of the other Republican candidates can say. Kelly (whose approval numbers have always been good) polls quite well against all potential Democratic mayoral candidates.

Kelly is both a longtime press darling and a member (naturally) of the city's power elite, a regular fixture at galas and benefits and parties at the stately manor of Bruce Wayne, or at least its real-world equivalents. He has remained insulated, somehow, from every NYPD scandal that's rocked the city during his tenure. He is never held responsible in the press for the misdeeds of his massive paramilitary band of roided-up serial perjurers.

Let's run down the record quickly: Kelly's NYPD acts (to the annoyance of the FBI) like an international intelligence agency devoted entirely to spying on Muslims. The department has a network of informants spying on American Muslims known as "mosque-crawlers." NYPD spies monitored Muslims in Newark as well, compiling a vital list of... restaurants. The NYPD even spied on Muslims who sought to ally themselves with the city against terrorism. (You can read the Associated Press' award-winning coverage of the NYPD's inept/counterproductive spying operations here.)

The NYPD has "trained" its officers with a virulent Islamophobic movie called "Third Jihad," which claims that "much of the Muslim leadership in America" has a "strategy to infiltrate and dominate" the U.S.. Kelly appeared in this movie in an interview. When questioned about this, NYPD spokesperson Paul Browne lied about Kelly's appearance, because everyone in the NYPD, from the highest levels to the beat cops, lies constantly, to juries and judges and the press.

Kelly's NYPD costs the city a lot of money. Not just in the "buying drones and military-grade noise cannons while people starve in the streets" sense (though that is one way) but in the constantly getting sued for brutality and wrongful imprisonment and so on way.

The 2004 Republican National Convention took place in New York, and in preparation for the convention Kelly and Bloomberg spent a lot of time spying on activists in order to figure out how best to illegally arrest hundreds of protesters. A judge ruled the NYPD tactics unconstitutional, opening the door to more lawsuits.

The NYPD is a world-leader in marijuana arrests. The vast majority of those arrested have been black men, a group the city has explicitly persecuted under Kelly and Bloomberg in a depressing variety of ways. Between 2002 and 2012 the NYPD made 440,000 arrests for low-level marijuana possession. Until Kelly finally told officers to stop doing so in 2011, a common police tactic was to trick or coerce people being frisked into taking drugs out of their pockets themselves, putting the marijuana in "public view" and making it an arrestable offense. (This is also illegal.)

Of course, another common NYPD tactic is to simply plant drugs on suspects.

And we haven't even gotten to the massive ticket-fixing thing, which led to charges against 16 officers. And the mass demonstration of NYPD officers outside the courthouse following those arrests, in which the cops said they were "just following orders" and mockingly chanted "E.B.T." at people lined up to receive benefits across the street. (And the officer indicted for trying to pay to have a witness against him killed.) At least the ticket-fixing was one of the very, very few incidents of NYPD criminality that was actually uncovered by the NYPD's Internal Affairs Bureau, which has otherwise failed to police the police.

There are also the tapes produced by Adrian Schoolcraft, an officer who recorded NYPD activity in Bed-Stuy and revealed the widespread manipulation of arrest data designed to game "CompStat," the much-vaunted Bloombergian data-driven police management program. Schoolcraft found that an NYPD cop "is expected to maintain high 'activity'—including stop-and-frisks—but, paradoxically, to record fewer actual crimes." Schoolcraft also confirmed the existence of "quotas" for arrests, summons and frisks -- something else the NYPD lied about for years. Cops were told to arrest people for petty crimes (or for nothing at all) and downplay more serious ones, in order to show that the police were busy but that serious crime wasn't a problem. Schoolcraft's superiors sent the whistleblower to a psych ward for six days. Kelly then kept the NYPD's own internal investigation into his allegations secret for two years.

And let's not forget the gun-running, the rapes, the various incidents of casual racism, and arrests of black public officials at the West Indian Day Parade. And, of course, lying about arresting journalists at Occupy Wall Street, and destroying the library, and everything else.

This is Ray Kelly's NYPD. It has remained his NYPD despite years of scandals that should've ended his career. Rudy Giuliani's reputation as a petty tyrant in charge of an out-of-control police force was based on incidents of spectacular brutality. Bloomberg's NYPD has made racist, unconstitutional policing streamlined, corporate and efficient, and easier for well-off white New Yorkers to justify or ignore. It's almost unbelievable that no heads rolled -- there was hardly any outrage outside of civil libertarian circles -- following the abuses of power at the 2004 RNC, where the city's contempt for the law and for its citizens under Kelly was made clear. After getting away with that, the city's treatment of Occupy Wall Street made perfect sense.

Despite all of this, Kelly is still the recipient of an endless stream of fawning press coverage. Rupert Murdoch thinks this is the guy who should run the whole city. Kelly "won't rule out" a run. If he'd decided to run a few months ago, he'd probably have the Republican line locked up.

Here's the good news: New York politics are in many ways fairly openly corrupt. If a person who isn't registered as a member of a party wants to run for office on that party line, they need permission from party bosses. That means buying off party bosses, with money. (Fun fact, Mike Bloomberg is mayor because he wrote big checks to hugely corrupt and sometimes insane people.) John Catsimatidis, a ridiculous clownish billionaire, has bought up the party bosses this year. Kelly can't outspend him.

No, Kelly would probably rather continue being an unaccountable but widely celebrated police commissioner than mayor. That could still happen. Democratic front-runner Christine Quinn has said she'd keep Kelly as commissioner. Bloomberg has also said (though not so much lately) that he supports Quinn. That seemed a bit convenient. At this point, whatever agreement the three had may have been called off. All the other Democrats are running hard against stop-and-frisk and Bloomberg can't stop complaining about how awful all his possible successors are. Bloomberg's complaints (and the fact that all the candidates for mayor are decidedly lackluster) are what has likely led to the return of Kelly speculation and push-polling.

This is the bad news: After years of endless, outrageous NYPD scandals, Kelly remains a broadly popular figure, both in terms of job approval and in terms of remaining a member in good standing of the respectable civic elite. The last decade of misconduct has shown that the head of the NYPD can get away with murder. (Or, at least, he can get away with his cops committing murder, and rape, and so on.)