Trash burning near Lambert Airport has suburban St. Louis residents worried this could be a disaster in the making 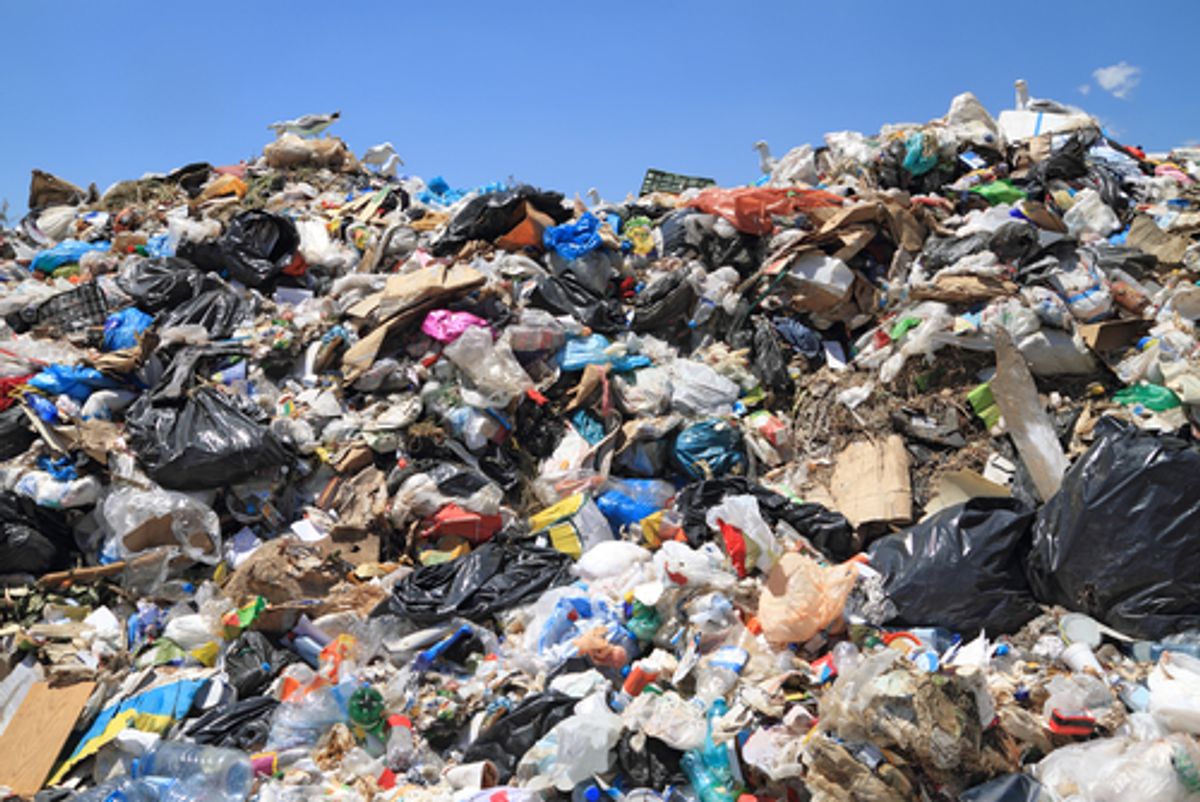 Dawn Chapman can put up with the noxious smell caused by smoldering trash in a landfill near her suburban St. Louis home. But if the burning creeps close to buried nuclear waste, she's ready to get out.

It's a problem that worries many people in this densely populated area near Lambert Airport, where the trash burns just 1,200 feet from another landfill that holds radioactive waste dating back to the Manhattan Project, which created the first atomic bomb in the 1940s.

"We're talking about just walking away from our home, honestly," said Chapman, a mother of three young special-needs children. She's not comfortable selling the house, even if she could.

"I'm a moral person. I can't just sell it to another family. If I feel like it's unsafe for my children, how could I do that to somebody else?" she asked.

Just below the surface of the Bridgeton Landfill, a layer of trash has been burning since at least 2010, fueled by an underground reaction of decomposing waste. The smoldering causes a noxious odor so overpowering that people in surrounding neighborhoods are reluctant to come out of their homes. Republic Services, the Phoenix-based owner of Bridgeton, is spending millions of dollars to ease the smell problem.

But the smell is just the most immediate concern. Environmentalists are alarmed by the possibility that the fire could someday reach the nuclear waste in the neighboring West Lake Landfill, owned by a subsidiary of Republic Services.

"I think what we're seeing is the possibility of a slow-moving disaster right before our eyes," said Ed Smith of the Missouri Coalition for the Environment.

Republic Services officials say that risk is remote, and they have a plan approved by state regulators, just in case.

At its current rate of movement, the underground smoldering would take more than 10 years to reach the edge of the West Lake landfill, according to company spokesman Richard Callow. He said preventative interceptor wells _ underground structures that capture below-surface gasses _ are already in place.

And if the fire did get close, Callow said, there are other options to shield the nuclear waste, including creating a barrier made of soil between the two landfills.

Missouri health officials and the state's Department of Natural Resources are monitoring the smoldering closely, Callow said, adding that the federal Environmental Protection Agency has repeatedly stated that the fire poses no threat to the nuclear waste.

EPA spokesman Chris Whitley declined to comment on the risk, deferring to the DNR.

In a statement, DNR spokeswoman Renee Bungart did not directly address the risk issue but said the state agency is working closely with the company and the EPA to resolve concerns at the site.

Those concerns have a long history.

A St. Louis company, Mallinckrodt Chemical Co., processed uranium for the Manhattan Project starting in the 1940s. In 1973, nuclear waste was dumped at West Lake and mixed with other waste and soil. The EPA designated it a Superfund site in 1990.

The original cleanup plan called for leaving the waste on-site, covering it with rocks, clay, fill dirt and vegetation, and installing monitoring wells for groundwater. After an outcry from residents and politicians, the agency agreed "to step back and take another look at it," Whitley said. A new plan isn't likely until 2014.

As for the fire, digging up the smoldering waste would expose it to oxygen, which could stir up flames and make matters worse, Callow said.

Over the past several months, the smell grew so bad that some residents blamed illnesses on it. DePaul Health Center posted signs in waiting rooms on some particularly bad days explaining the odor to patients and visitors. Missouri Attorney General Chris Koster filed suit in March against Republic Services, alleging violations of state environmental laws.

On May 22, work began to remove concrete pipes at the Bridgeton Landfill that could be allowing the smell to escape into the air. After the pipes are removed in mid-June, Republic Services will cap the landfill with a huge shell made of plastic and high-tech mesh.

The cap should help the smell, but it won't end the smoldering.

At the time of his lawsuit, Koster said, the smoldering did not appear to be moving toward the nuclear waste. But six weeks later, Assistant Attorney General Joe Bindbeutel said new evidence, including increasing amounts of steam in the "neck" area between the two sites, showed some potential movement in that direction.

If the nuclear waste caught fire, experts say it would not cause any sort of meltdown, but it could pose a health risk for nearby residents.

Heat from any fire at the nuclear site could spark an explosion in methane pockets or buried gas cylinders, throwing radioactive particles into the air, said Bob Criss, professor of earth and planetary science at Washington University in St. Louis, who has studied environmental concerns at the landfill.

The fire could also create "subsurface voids" that might expose nuclear waste to wind and rain _ especially problematic because the landfill sits in the Missouri River flood plain, Criss said.

Elevated levels of radiation have been detected in some groundwater sampling at West Lake. But radiation in groundwater poses no health risk "unless a person is actually drinking the groundwater," Whitley said.

Radium, a highly radioactive element, often occurs naturally in groundwater throughout the Midwest, he added.

The EPA on Wednesday released a report showing that the nuclear waste has not spread beyond its current landfill, according to information from a flyover of the site using a plane capable of detecting gamma radiation emissions. That aerial survey sought to identify areas of underground burning, but those scans were inconclusive, Whitley said.

Remote or not, the possibility of nuclear contamination so close to her backyard keeps Chapman up at night. The stay-at-home mom administers a Facebook page on the landfill problems. She hears from many residents near the landfill who don't believe the claims that things are under control.

"The bottom line is it's very serious," Chapman said. "What's happening up here is not something that has ever been encountered before. They've had landfill fires and nuclear waste, but never in such close proximity."