Who will be the next Michele Bachmann?

The right needs a hero and the left a villain. Here's who could step up to the plate now that Bachmann is gone 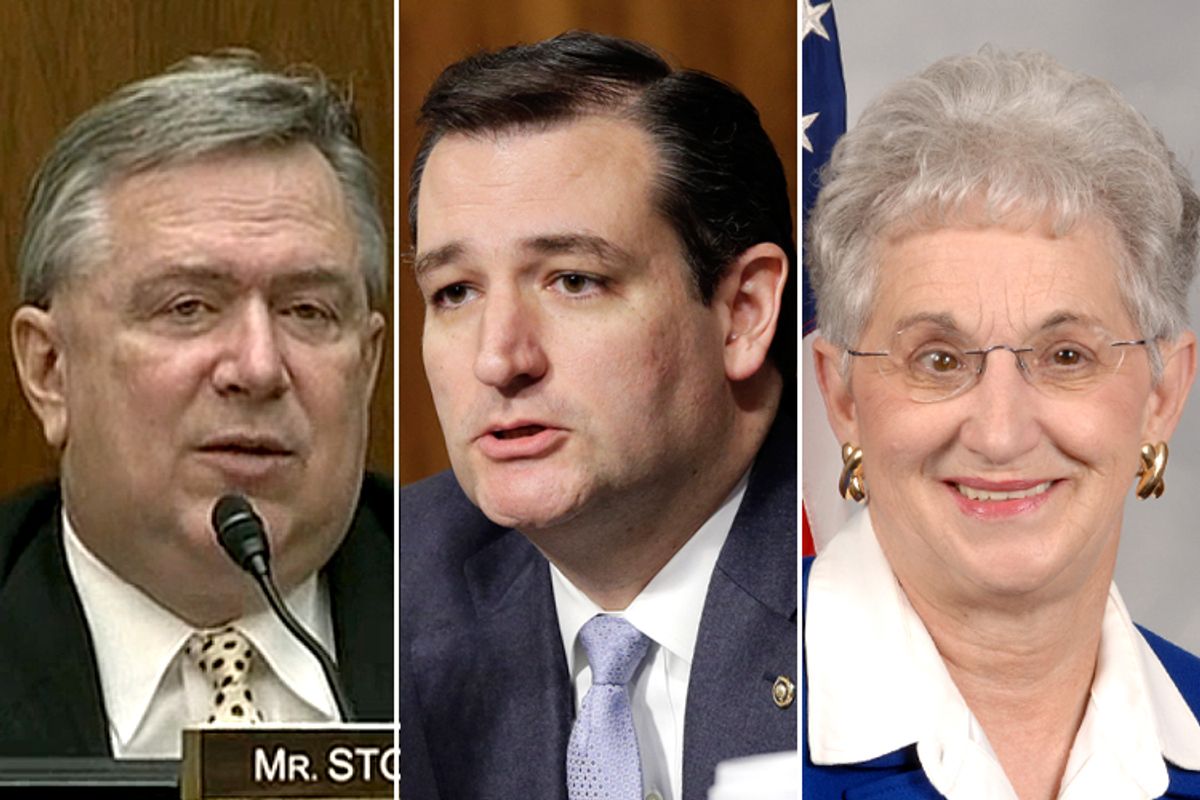 So who will be the next Bachmann -- both a hero to the right and villain to the left? We asked Tea Party and conservative activists, as well as the liberal operatives and bloggers who loved to hate her (and love to watch their traffic numbers and fundraising dollars spike when they write about her). Everyone agreed that Bachmann is probably irreplaceable. She was an unequaled lightning rod and cash cow, both for herself and for Democratic groups that used her name as a shorthand for everything wrong with the GOP in email solicitations, so she leaves big shoes to fill.

You probably already know Ted Cruz, Rand Paul, Steve King and some others, but here's our best guess about names you might not know but will start seeing more often at places like both CPAC and MSNBC, in no particular order:

Steve Stockman (Texas): He's been around for a while, but Stockman's star is rising as he seems to be stepping into the void left by retiring or ousted Tea Partyers. He has one of the most colorful and prolific Twitter feeds of any member of Congress (even giving away free AR-15s). He's the guy who invited Ted Nugent to the State of the Union address (he had to vow ahead of time that he wouldn’t interrupt the speech); he’s introduced legislation to prohibit schools from instituting “gun free zones” in the wake of Sandy Hook; he’s threatened to impeach Obama over gun control; he’s compared Barack Obama to Saddam Hussein; he’s dissed transgender people; he’s mocked a fellow congresswoman’s sartorial choices, etc., etc. Definitely a buy.

Tim Huelskamp (Kansas): Elected in 2010 to represent the "Big First" congressional district -- over half of Kansas -- the social conservative lawmaker has made himself a villain of the LGBT community for saying he would oppose marriage equality even if his son came out as gay and for saying employment protections "reward homosexual behavior." He also hates "racist" Planned Parenthood, comparing it to "pro-slavery forces." He was one of only nine lawmakers to vote against any form of the Violence Against Women Act. As for the GOP's attempts to reach out to the "so-called 'Hispanic voter,'" that's "very distracting and very discouraging," he has said. He might be more Rick Santorum than Michele Bachmann, but should get more attention.

Matt Salmon (Arizona): Salmon had a similar experience to Ohio Republican Sen. Rob Portman's, but when his own son came out as gay, Salmon stood by his opposition to marriage equality. Like Huelskamp, he was also one of only nine lawmakers who opposed the Violence Against Women Act. He's also introduced a term limits congressional amendment and called for shutting down the government. Salmon was elected in 2012, but to a seat he had previously occupied but left in order to run for governor against Janet Napolitano. An experienced politician, he may keep his head down if can help it.

Ted Yoho (Florida): We haven't heard much from this freshman yet, but the fact alone that he beat powerful incumbent Republican Rep. Cliff Stearns -- who had endorsements from Ron Paul, Paul Ryan, Michele Bachmann and Allen West -- and is "the least experienced House freshman" should put him on the list. Tea Party groups are excited about his potential. A wild card, stay tuned.

Ron DeSantis (Florida): Tea Party activists have high hopes for this former Navy SEAL and prosecutor who comes straight out of the conservative movement after spending years writing books and articles for conservative publications like the National Review, the Washington Times, the American Spectator, Human Events and the American Thinker. A smart thinker with a strong résumé, he may not want to end up as a liberal target.

Paul Broun (Georgia): Now running for Senate in Georgia, Broun has been a marginal lefty villain for several years, best known for heckling Obama on Twitter during his State of the Union and saying evolution and the Big Bang Theory are “lies straight from the pit of hell.” A reliable source of heated rhetoric, expect him to get more attention as the Senate campaign picks up.

Jim Bridenstine (Oklahoma): After coming out of nowhere to defeat five-term Rep. John Sullivan in a GOP primary in 2012, freshman Bridenstine has been making a bit of a name for himself on his opposition to Obamacare, saying the Supreme Court doesn't actually have the right to decide what's constitutional  (the Constitution says otherwise). He also wanted to make any funding for the government conditional on defunding the health law entirely. It's early yet for him, but stay tuned.

Virginia Foxx (North Carolina): She's not new, but Foxx has a tendency to end up in headlines for saying saying things like that seniors will be "put to death by their government" under Obamacare (she also said it was worse than terrorism). Or that she has "very little tolerance" for students who graduate with high loan debt. Or that the story of Matthew Shepard's murder was a "hoax" (she later apologized for that). She's also invoked the Holocaust after the Aurora shooting when pushing to decrease government regulation. Oh, and do not ride on her special elevator. She may have plateaued for the moment, however.

Louie Gohmert (Texas): Gohmert had the rhetorical flourish of the hardest core of the Tea Party before the Tea Party even existed, never missing an opportunity to appear on Fox News or talk radio or speak during "Special Orders," a time after the House has adjourned for the day when members can speak on the House floor on any topic they wish (to C-SPAN, essentially). It's impossible to pick just a few of Gohmert's comments, but he continues to impress us, like when he tried to pull rank with police officers in Washington while trying to fight a parking ticket in March. Or the time last year he talked about caribou sex during a hearing. A reliable standby.

Tom Cotton (Arkansas): Tea Party activists are excited about this freshman, a young veteran and Harvard Law grad who is considered a rising star in the GOP Caucus after winning a Democratic district in 2012. Politico named him "most likely to succeed" in its faux yearbook. So far, his big issues are defense related, including vocal opposition to Chuck Hagel's nomination to defense secretary. But he's been the subject of controversy as well for opposing women in the infantry, suggesting Saddam Hussein may have been involved in 9/11, and for writing a letter calling for jailing journalists who publish national security secrets. He seems more interested in getting things done than bomb-throwing, however.

Justin Amash (Michigan): The nearest heir to Ron Paul (whom he endorsed for the presidency in 2012) outside of Rand, the chairman of the House Liberty Caucus has shown a willingness to break with his party on key issues since his election in 2010, especially when it comes to national security and civil liberties like the 2012 National Defense Authorization Act. A bit of a contrarian, some critics have accused him of grandstanding. He's unpredictable and often sides with progressives, so probably not a Bachmann contender.

Trey Radel (Florida): This up-and-coming freshman has already floated impeaching Obama over new gun safety regulations, called for weaning people off of federal disaster aid, expressed his love for hip-hop -- and dislike for Karl Rove -- and got busted buying questionable websites. Too soon to tell, but there's potential here.

Who have we missed? Let us know in the comments.