Spelling bees make trolls of us all 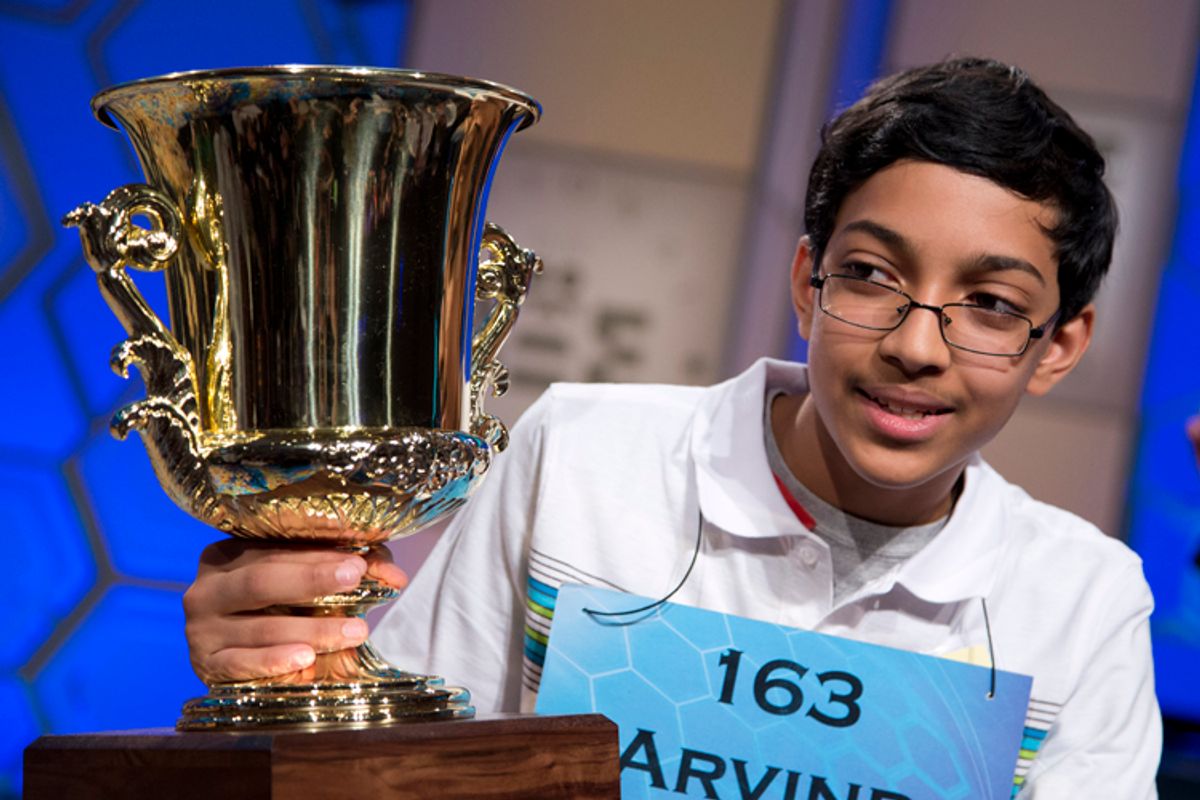 It’s safe to say that in the public consciousness of “sport,” appreciation is largely paid to prowess of the physical—millions of fans worldwide cream their jeans for a taught, tight-skinned, sweat covered, powerful, sexy, pulsating/throbbing/you-see-what-I’m-getting-at athletes doing the implausible-unto-impossible. This is natural and logical and not even weird: it’s rad to see someone pull off something you didn’t think was possible within the constructs of humanity and physics and humans’ relationship with physics. We like to see the limits pushed, stretched, broken. This is all to the good: there are only so many opportunities to be astonished in life, and we might as well take them where we can get them. So why can’t we get equally stoked when a nervous tween can use practiced technique to spell an insanely complicated word that would melt the circuits of 99 percent and change of native English speakers?

Sure, we appreciate it. And yes, it doesn’t quite seem like a sport—although it’s worth noting that the Associated Press started running spelling bee stories on its sports wire recently—and yes, these are reedy, brace-faced, terrified tweens. But this doesn’t really diminish the virtuosity on display even a little bit. It might be that, much like soccer, spelling will never be appreciated by the majority of Americans. And, as with soccer or anything Americans can’t largely understand, it will continually be mocked and maligned or otherwise laughed-off. Which, honestly, is complete bullshit and also maybe a little racist, but mostly bullshit, and a shame.

Last night, Arvind Mahankali, a 13-year-old Indian-American boy, won the Scripps National Spelling Bee by spelling a Yiddish word most of us had never heard before, and which he had almost certainly never heard before. This was a word that might as well have been imaginary, and which Mahankali managed to suss out the order of its first three letters. And immediately the social medias barfed themselves into amateur night at the Improv in Ponca City, Oklahoma. The Twitter account for Men’s Humor provided us with this archaically pathetic gem:

Pretty sure if any of these kids at the ESPN #spellingbee were asked to spell their last name, they'd be out.

Which is very @MensHumor and very har fucking har and not much less racist than a tweet in a similar vein by the @SportsHumor spinoff. Yes, Indian names are difficult to spell for non-Indians. The sky? Blue! Within the first hour of the post, nearly 1,000 people found it hilarious enough to retweet it.

This is a familiar bummer where @MensHumor is concerned, and it’s probably best to leave the tweets of the ignorant and racist in deserved anonymity. But rest assured there were many, many more riffs on @MensHumor's shitty tune, in many, many shittier shades of obscene. Beyond the slack, dumb xenophobia of bullying these children, though, there’s another question: what makes the difficult skill of spelling so outrageous to us?

For one thing, it’s not really an affront against intelligence. We’ve awed at chess prodigies, have shucked millions of dollars into the world of competitive video gaming, and chewed our nails to the moons watching Ken Jennings destroy a Jeopardy streak. The country got hot and bothered for the statistic stylings of Nate Silver during the last election. Check out the big brain on Brad, we seem to say pretty often. But, for whatever reason: fuck the spellers, those tiny brown nerds with their terabyte vocabularies.

As most of us have devices in every aspect of our lives that can and do spell for us—or at least underline our mistakes in shaming red squiggles—maybe a supernatural gift for spelling is not strictly useful. But our lives also do not force us to get balls into small holes or jump higher than any other human, lest we sign up for it. Objectively speaking, pragmatically speaking, most competition is pretty silly. Who can do what trivial thing better? That guy! Let’s praise that guy! We internalize and accept this where defensive backs and stretch-fours and four-tool outfielders are concerned; when the winners are spellers stuck poignantly in Those Awkward Years, it’s a different, meaner thing.

The winner of the SNSB nets thirty grand, which for a 13-year-old with a scholarship-earning brain is just as amazing as an undereducated 22-year-old grabbing double-digit millions for a year’s worth of work. Arvind probably won’t need that money when his spelling days are over, although it would help some with tuition. The same can’t be said by many professional athletes. Anyway, it all more or less works out.

So why the joy in gut-punching these kids when they lose? Here’s a liver-wrecking drinking game: slug a shot any time your Facebook feed burps up a version of Buzzfeed’s “30 Kids Getting Their Hearts Ripped Out And Stomped On At The Scripps National Spelling Bee” this week. See you in DUI class! No one, or no one you’d let in your feed, would revel in a mocking list of the most brutal/boneheaded sports injuries of a season. We respect the torn ligaments and shattered careers of rookies instantly and viciously consigned to very different lives than they had planned by a misplaced helmet or rolled ankle. We mourn them, we share in their pain. At the very least, we don’t fucking laugh.

All this callous tween-trolling is a drag, and maybe that’s all there is to say about it. But there are leagues of pre-pubescent mental athletes out there who could own any one of us in a ‘sport’ that, it so happens, every single fucking one of us has technically trained for. For more than a decade, with grades. Can you imagine if every American was made to play basketball, intensively and with parents mean-mugging our report cards if our defensive rotations were slow, for twelve years?

So, then: big-up to Arvind. And suck twelve to all the spelling haters who can discount the SNSB and still spend endless days on their couch with one hand on their crotch and another gripping a domestic brew, still stewing about some forgotten high school football game, still wishing they could shove the kid who looked and acted and was different than them into a locker. Every other hour of ESPN belongs to those guys. Many hours of most other channels do, too. Arvind and them earned their time. They, and we, might as well enjoy it.