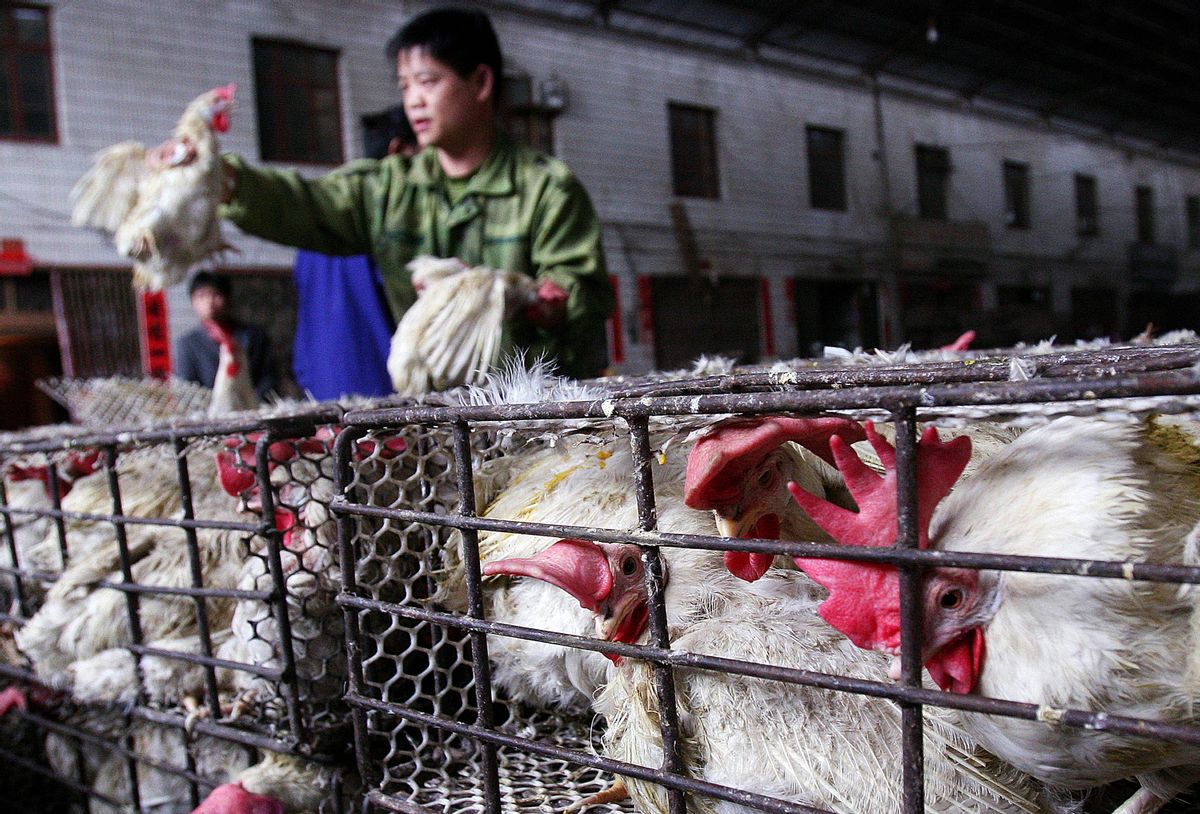 BEIJING (AP) — Fire raged through a poultry plant in northeastern China on Monday, trapping workers inside a cluttered slaughterhouse and killing at least 119 people, reports and officials said.

Several dozen people also were hurt in the blaze in Jilin province's Mishazi township, which appeared to have been sparked by three early morning explosions, the official Xinhua News Agency said. The provincial fire department, on its microblog, attributed the blasts to a leak of ammonia, a gas that is kept pressurized as part of the cooling system in meat processing plants.

State broadcaster CCTV quoted unidentified workers as saying the fire broke out during a change of shifts and may have originated in a locker room at a time when about 350 workers were at the plant, owned by Jilin Baoyuanfeng Poultry Co.

It wasn't clear how many workers had been accounted for and a provincial government media official, who refused to give his name, said he expected the death toll to rise further as more bodies were recovered from the charred building.

Some employees raised the alarm shortly after a shift began at 6 a.m., and then the lights went out, boosting the level of panic as workers rushed to find an exit, employee Wang Fengya told Xinhua.

"When I finally ran out and looked back at the plant, I saw high flames," Wang, 44, was quoted as saying. Xinhua said she and three other workers were sent to a hospital in the nearby provincial capital of Changchun.

Another worker quoted by Xinhua, 39-year-old Guo Yan, said the emergency exit at her workstation was blocked and she was knocked to the ground in the crush of workers seeking to escape through a side door.

"I could only crawl desperately forward," Guo was quoted as saying. "I worked alongside an old lady and a young girl, but I don't know if they survived or not."

The disaster killed 119 people, and 54 people were being treated in hospitals, the provincial government said on its microblog. Calls to fire and rescue services rang unanswered and hospital administrators said they had no information about the injured.

By about noon, the fire had been mostly extinguished by about 500 firefighters and bodies were being recovered from the charred buildings. CCTV footage showed dark smoke billowing up from the prefabricated cement structures topped with corrugated iron roofs.

The fire highlighted the lax safety standards at many Chinese workplaces, despite efforts to compel improvements through regular inspections and fines.

It could also focus renewed scrutiny on China's biggest pork producer, Shuanghui International — unrelated to the poultry plant — as it aims to buy U.S. food giant Smithfield in what would be China's biggest takeover of an American company.

The poultry plant is one of several in the area where chickens are slaughtered and then quickly cut up into pieces and shipped to market. The entire process takes place in near-freezing conditions and such plants are usually built with large amounts of flammable foam insulation to maintain a constant temperature.

"I'm sure they consider some aspects of safety design. However, I think safety, to me, is not the first priority in their design plan," Yan said.

Jilin Baoyuanfeng produces 67,000 tons of processed chicken per year and employs about 1,200 people. The plant is located outside the city of Dehui, about 800 kilometers (500 miles) northeast of China's capital, Beijing.

Established in 2009, the company serves markets in 20 cities nationwide and has won numerous awards for its contribution to the local economy, according to introductions posted online.

The area where the fire occurred is an agribusiness center, especially for poultry. Nearby is one of the biggest producers of broiler chickens in China, Jilin Deda Co., which is partly owned by Thailand-based conglomerate Charoen Pokphand Group.

Monday's fire hit a company that is much smaller than Jilin Deda. Though it's unlikely to have an impact on China's chicken supply, the accident came as chicken producers were seeing sales recover after an outbreak of a deadly new strain of bird flu, H7N9, briefly scared the public in April and early May.