They still have PTSD from losing to Scott Brown. Now some worry the race to succeed John Kerry could bring déjà vu 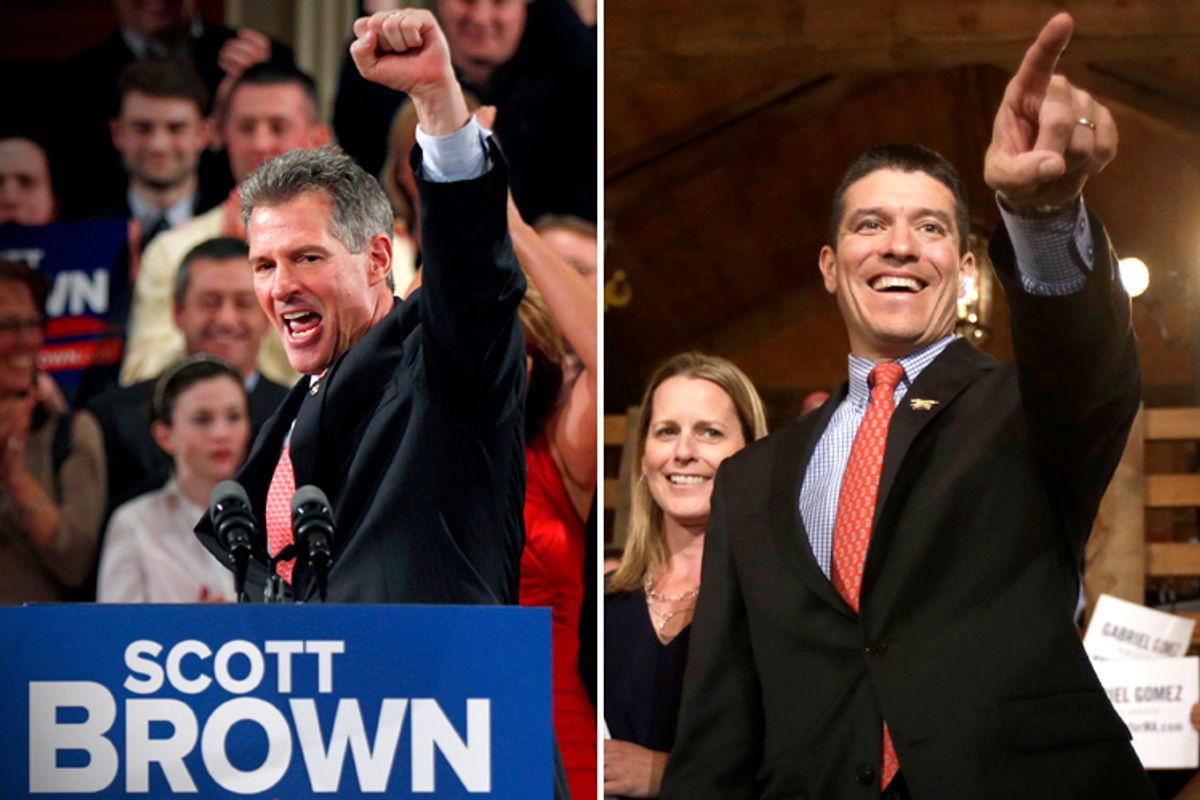 "To screw up a U.S. Senate special election isn’t a theory for us ... We’ve done it." That's what the Massachusetts Democratic Party chairman said to the state's largest newspaper with just a few weeks before the June 25 Senate special election to fill John Kerry's seat. In other words: Despite being one of the bluest states in the union, Democrats in Massachusetts are worried about Rep. Ed Markey's chances against Republican Gabriel Gomez later this month.

The aforementioned quote, from state Democratic Chairman John Walsh in Sunday's Boston Globe, "shows you exactly what’s driving everybody in this race," Boston-based Democratic strategist Mary Anne Marsh told Salon. "They want to make sure that there’s not one thing that doesn’t get done -- an ad made, a door knocked, a resource afforded, an endorsement, an appearance, what have you -- to drum up enthusiasm for June 25. They're taking nothing for granted."

And yet while Democrats both in Massachusetts and nationally are doing everything they can to help Markey, some fear that the candidate himself hasn't been working hard enough, making few public appearances and speaking rarely to the press. "Democrats are concerned and disappointed in him," Tufts political scientist Jeffrey Berry told Salon, explaining they're worried about his "conservative" and "low key campaign."

"Unfortunately for the Democrats," Berry added, "it fits right into the dominant motif of the Gomez campaign, which is that this guy’s been around a long time, and the subtext of that is this guy’s too old. So the the lack of vigor works against him in two ways: both in failing to impress his base as well playing into Gomez's hands."

The specter of 2010, when Scott Brown slipped under Democrats' radar to beat Martha Coakley, who ran a particularly lackluster race, looms large in Democrats' mind. One troubling sign: Markey earned slightly fewer votes in this year's Democratic primary than Coakley did in 2010, and she ran against two other candidates, while Markey only had one. (Incidentally, Coakley is now one of the more popular politicians in the Bay State.)

Markey's campaign defended its strategy, saying the congressman has been using his time to hold private meetings with key stakeholders, like labor unions and local officials -- groups some Democrats say are more valuable in a low-turnout election than whoever might show up to a public rally or town hall. Indeed, while Markey started off the compressed general election campaign with a narrow lead over Gomez, the Democrat has since widened his lead to over 10 points in the average compiled by Real Clear Politics.

But Spencer Kimball, a pollster and professor of political communication at Emerson College in Boston, says Markey's numbers may be artificially high, driven up by the fact that he's already run plenty of TV ads while Gomez is just beginning his air campaign. As Gomez' fundraising catches up and he starts running more commercials, Kimball said he expects the race to tighten. "Markey hasn't done anything to run away with it. That opportunity was there while Gomez was busy running around raising money," Kimball said in an interview. "When you're up and the wind's at your back, that's the easiest time to be in the field, shaking hands, getting that great press coverage."

And despite Massachusetts' reputation as a liberal haven -- and the fact that only 11 percent of the population are registered Republicans -- it did elect Scott Brown and give the world Mitt Romney, along with a string other Republicans. Gomez, a Latino former Navy SEAL and Harvard Business School graduate, is a formidable candidate who is doing better in cities than most Republican candidates. For instance, in blue-collar Lowell, where Democrats outnumber Republicans 4-to-1, Gomez is actually ahead at the moment, according to Kimball.

“Listen to this, Massachusetts: You simply cannot elect Barack Obama by a landslide and then lose this Senate seat!” Michelle Obama said last week while campaigning for the congressman. The president is the most popular politician in the state, while Democratic Sen. Elizabeth Warren, Gov. Deval Patrick, and Boston Mayor Tom Menino are also well-liked, so they're all hoping to reflect some of that warmth onto Markey.

The stakes just got higher for national Democrats, too, considering that New Jersey Gov. Chris Christie will probably appoint a Republican to replace Democratic Sen. Frank Lautenberg, who died today. If Gomez wins, the two pickups for the GOP could change the calculus on immigration reform and other bills in the Senate.

And while it's a cliché to say that the race will come down to turnout, it's absolutely true in a summer special election when voters are still wary after the exhaustive 2012 presidential race. Massachusetts has never had a special election in June before, so polls may prove unreliable if they don't accurately predict who actually shows up to vote. But here, despite the apparent lack of enthusiasm among liberals, Markey clearly has the advantage in Democrats' prodigious ground operation, built largely on the infrastructure created to elect Warren and Obama.

"This is Markey’s race to lose, and every Democrat is doing everything in their power to make sure that doesn’t happen," said Marsh.