New data shows school "reformers" are full of it

Poor schools underperform largely because of economic forces, not because teachers have it too easy 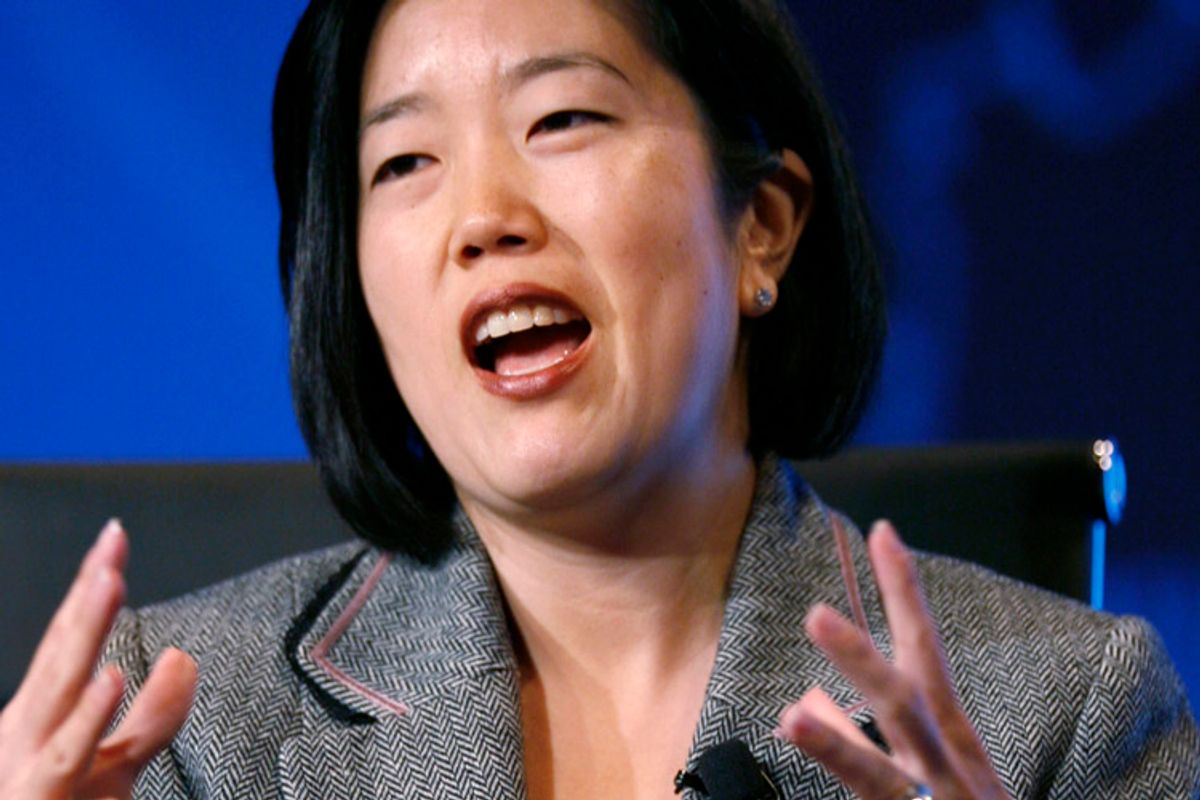 In the great American debate over education, the education and technology corporations, bankrolled politicians and activist-profiteers who collectively comprise the so-called "reform" movement base their arguments on one central premise: that America should expect public schools to produce world-class academic achievement regardless of the negative forces bearing down on a school's particular students. In recent days, though, the faults in that premise are being exposed by unavoidable reality.

Before getting to the big news, let's review the dominant fairy tale: As embodied by New York City's major education announcement this weekend, the "reform" fantasy pretends that a lack of teacher "accountability" is the major education problem and somehow wholly writes family economics out of the story (amazingly, this fantasy persists even in a place like the Big Apple where economic inequality is particularly crushing). That key -- and deliberate -- omission serves myriad political interests.

For education, technology and charter school companies and the Wall Streeters who back them, it lets them cite troubled public schools to argue that the current public education system is flawed, and to then argue that education can be improved if taxpayer money is funneled away from the public school system's priorities (hiring teachers, training teachers, reducing class size, etc.) and into the private sector (replacing teachers with computers, replacing public schools with privately run charter schools, etc.). Likewise, for conservative politicians and activist-profiteers disproportionately bankrolled by these and other monied interests, the "reform" argument gives them a way to both talk about fixing education and to bash organized labor, all without having to mention an economic status quo that monied interests benefit from and thus do not want changed.

Meanwhile, despite the fact that many "reformers'" policies have spectacularly failed, prompted massive scandals and/or offered no actual proof of success, an elite media that typically amplifies -- rather than challenges -- power and money loyally casts "reformers'" systematic pillaging of public education as laudable courage (the most recent example of this is Time magazine's cover cheering on wildly unpopular Chicago Mayor Rahm Emanuel after he cited budget austerity to justify the largest mass school closing in American history -- all while he is also proposing to spend $100 million of taxpayer dollars on a new private sports stadium).

In other words, elite media organizations (which, in many cases, have their own vested financial interest in education "reform") go out of their way to portray the anti-public-education movement as heroic rather than what it really is: just another get-rich-quick scheme shrouded in the veneer of altruism.

That gets to the news that exposes "reformers'" schemes -- and all the illusions that surround them. According to a new U.S. Department of Education study, "about one in five public schools was considered high poverty in 2011 ... up from about to one in eight in 2000." This followed an earlier study from the department finding that "many high-poverty schools receive less than their fair share of state and local funding ... leav(ing) students in high-poverty schools with fewer resources than schools attended by their wealthier peers."

Because of who comprises it and how it is financed, the education "reform" movement has a clear self-interest in continuing to say yes, we should believe such fact-free pabulum. And you can bet that movement will keep saying "yes" -- and that the corporate media will continue to cheer them as heroes for saying "yes" -- as long as public education money keeps being diverted into corporate coffers.

But we've now reached the point where the economics-omitting "reform" propaganda has jumped the shark, going from deceptively alluring to embarrassingly transparent. That's because the latest Department of Education study isn't being released in a vacuum; it caps off an overwhelming wave of evidence showing that our education crisis has far less to do with public schools or bad teachers than it does with the taboo subject of crushing poverty.

In 2011, for instance, Stanford University's Sean Reardon released a comprehensive study documenting the new "income achievement gap." The report proved that family income is now, by far, the biggest determining and predictive factor in a student's educational achievement.

Then, just a few months ago, Reardon chimed in again to contextualize all of this. In a follow-up New York Times article, he noted that it is no coincidence that these out-of-school factors -- and in particular economic conditions -- have created the "income achievement gap" at the very moment economic inequality and poverty have exploded in America.

Taken together with the new Department of Education numbers, we see that for all the elite media's slobbering profiles of public school bashers like Mayors Rahm Emanuel and Michael Bloomberg, for all of the media's hagiographic worship of scandal-plagued activist-profiteers like Michelle Rhee, and for all the "reform" movement's claims that the traditional public school system and teachers unions are to blame for America's education problems, poverty and economic inequality are the root of the problem.

One way to appreciate this reality in stark relief is to just remember that, as Barkan shows, for all the claims that the traditional public school system is flawed, America's wealthiest traditional public schools happen to be among the world's highest-achieving schools. Most of those high-performing wealthy public schools also happen to be unionized. If, as "reformers" suggest, the public school system or the presence of organized labor was really the key factor in harming American education, then those wealthy schools would be in serious crisis -- and wouldn't be at the top of the international charts. Instead, the fact that they aren't in crisis and are so high-achieving suggests neither the system itself nor unions are the big factor causing high-poverty schools to lag behind. It suggests that the "high poverty" part is the problem.

That, of course, shouldn't be a controversial notion; it is so painfully obvious it's amazing anyone would even try to deny it. But that gets back to motive: The "reform" movement (and its loyal media outlets) cast a discussion of poverty as taboo because poverty and inequality are byproducts of the same economic policies that serve that movement's funders.

To understand this pernicious bait and switch that writes economics out of the education story, simply think through the motives.

Think first about how the dominant policy paradigms in America -- tax cuts for the rich, deregulation and budget cuts to social services -- exacerbate inequality and poverty, but also benefit the major corporations that fund the "reform" movement. Then think about how it isn't a coincidence that the "reform" movement's goal is to divert the education policy conversation away from anything having to do with poverty and economic inequality.

You can tell that's not a coincidence because unlike other issues, the topics of poverty and economic inequality will inevitably prompt a conversation about changing the underlying economic policies (regressive taxes, deregulation, etc.) that create crushing poverty and inequality. For corporations served by the existing economic paradigm and for the politicians and activists those corporations underwrite, such a conversation is simply unacceptable because changing the policies that create poverty and inequality potentially threatens their existing financial power and privilege. Thus, those corporations, politicians and activists in the "reform" movement do whatever they can -- bash teachers, scream strong-but-meaningless words like "accountability," criticize public school structures, etc. -- to shift the education conversation away from poverty and inequality.

Reality, though, is finally catching up with the "reform" movement's propaganda. With poverty and inequality intensifying, a conversation about the real problem is finally starting to happen. And the more education "reformers" try to distract from it, the more they will expose the fact that they aren't driven by concern for kids but by the ugliest kind of greed -- the kind that feigns concerns for kids in order to pad the corporate bottom line.