Mommy's got a potty mouth

I've always been a fan of cussing -- until my children began imitating me. Do I have to give up my guilty pleasure? 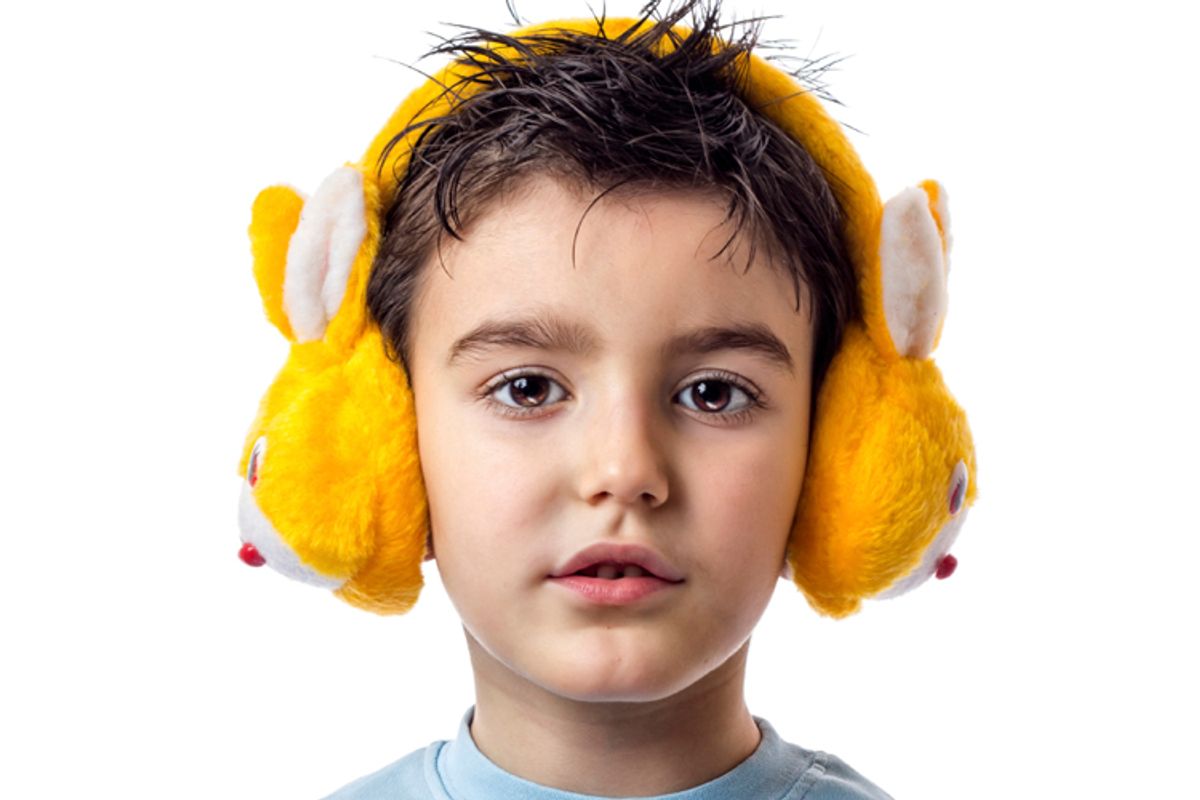 My 6-year-old tossed his pencil down on the kitchen table.

I was boiling pasta at the stove top. “What did you say?” It wasn’t an accusation. I was pretty sure I’d heard him wrong.

“The fucking pencil,” he repeated earnestly. “It's broken.”

He didn’t have that sheepish, "oops" look on his face, and there was nothing in his tone that indicated an awareness of crossing any line. My son has always prided himself on employing the mot juste, ever since he was 2 and announced proudly that he was too “selfish” to give me a lick of his ice cream. It was clear that in this moment, he was only trying to find the appropriate adjective to describe the pencil. And thanks to me, he thought that word was a four-letter one.

I curse. A lot. More, certainly, than many other mothers of three young children; more, maybe, than most people in general, excepting phone sex workers, sailors and actors in Tarantino films. Not just the soft stuff either, like “asshole” and “hell,” which I don't even consider a real expletive. I’m a fan of the f-bomb in all its forms and yes, sometimes, I go whole hog, and stick a “mother” in front. Once, in a moment of rage and sleep deprivation, when my year-old son had a 104 degree fever and the mechanic who’d towed our car was holding it hostage, I went so far as to indulge in, “motherfucking cocksucker.” My mother, feeding the baby a bottle a few feet away, looked aghast. The mechanic wasn’t too happy either.

“You got some mouth on you lady,” he said. “You kiss your husband with that mouth?”

I’m not proud of my choice of words but, in my defense, the guy was a motherfucking cocksucker, not to mention a chauvinist.

Back then, I wasn't troubled by my foul mouth because my son couldn't even manage "Mommy" yet, much less its far filthier derivative. Now that I have an 8-year-old, a 6-year-old and a toddler in my charge, though, I'm forced to reassess.

I don't curse at my kids, don’t employ profanity to deride or insult them. Though I’m sometimes tempted. I never say, “Are you fucking kidding me? I TOLD you to pee before we got in the car!” or “God, you act like such an asshole when you skip your nap.” With the exception of an occasional “What the hell?” or “Dammit!” my swearing isn't about them, or directed at them. But I do curse around them quite a bit, more than I should if their recent forays into profanity are any indication.

“Sonofabitch!” my 6-year-old daughter exclaimed last week when she spilled her juice cup.

I dropped my head in my hands as my husband asked, “What did you expect, sailor mouth? They’re not deaf. Keep it up and the baby’s first sentence will be 'Holy fucking shit.'”

Two years ago, my son's broken pencil was a wake-up call ... during which I promptly snoozed. I had the luxury of doing this because my son is a naturally cautious and rule-abiding kid, who stopped mimicking my potty mouth after a conversation in which I explained that that kind of language isn't terribly precise or creative, and furthermore, can offend and upset people. I acknowledged the bad example I’d set, apologized and basically asked that he, a child, hold himself to a higher standard than his grown-ass mother. While this worked for my son, I know it won't for my daughter, an experimenter, attention-lover and pitch-perfect mimic. I know that unless I'm up for my kindergartener telling kids at the playground to give her back her fucking ball, I'd better drop the "do as I say and not as I do" routine.

And I have tried. Sort of. I’ve resolved on at least three consecutive New Year’s to clean up my conversation, but it’s never lasted and I suspect it's because, deep down, I feel entitled to it.

I enjoy swearing. It feels good, and not just when I’m furious but when I’m surprised, and disappointed, and excited too. Since having kids, I’ve forfeited many indulgences, and moderated the rest – if only because I’m too cash-poor and exhausted to smoke, or drink more than a glass or two of wine or have raucous, wall-banging sex. Like a balding man clinging to virility with a comb-over, I refuse to relinquish this remnant of hedonism – along with chocolate, coffee and reality TV.

In fact, researchers say, she’s not wrong. According to a recent study in Perspectives on Psychological Science by Timothy Kay of the Massachusetts College of Liberal Arts, swearing offers plenty of compelling psychological benefits, including a sense of catharsis and pain relief.

I’m no expert but I do know that when I get whacked in the forehead by a baseball bat – accident or not -- it makes me feel significantly better to yell “FUUUUCK!”  Yelling “FUUUUDGE!” does not achieve the same result.  It’s not just the thick cluster of consonants that are so satisfyingly hard-edged; it’s the power of the taboo, too.

In some form or another we’ve been cursing since ancient Rome, reports Melissa Mohr in her new book "Holy Sh*t: A History of Swearing." Though they change, taboo words are an essential element of language.

Of course, I don't curse just for pleasure and catharsis but – much of the time -- purely out of habit. Understanding this makes it difficult for me to justify, because it’s one thing to go blue with purpose and another thing to lapse into the language out of sheer laziness. Then, too, if I’m being honest, there’s a part of me that uses the profanity as a shorthand to communicate to the world at large that I’m an edgy, “cool” mom, not one of those uptight, sanctimommies that are so often objects of disdain. Cursing is a less damaging way to assert this than, say, getting tanked and doing a striptease at my daughter’s sixth birthday party. But still, it does feel a little like I’m a middle-aged banker with a soul patch who takes his motorcycle to work. Except that I wouldn’t mind if my kids grew copycat soul patches, and I do mind when they tell me their fucking pencil’s broken.

I'm sure my perspective will change as they get older, but my children are still mastering basic language skills, and you have to learn the rules before you can bend them. Unlike other parents I know, I have a perfectly traditional perspective here: I don't think it's OK for my kids to swear, not at home, not at third-grade recess, not on special occasions. Until they can scan iambic pentameter or explain dramatic irony, my kids will have to keep their language G-rated.

And so, apparently, will I.

The only question is, how? Resolutions are made to be broken, cuss jars are no deterrent, and substitutions only remind me of what I’m missing. It would appear I’m going to have to kick this habit with good, old-fashioned willpower, by biting my tongue. Until bedtime, at least. After all, I’m only fucking human.

Nicole C. Kear is the author of the forthcoming memoir, "Now I See You" (St. Martin's Press, Spring '14), and the blogger behind A Mom Amok.
MORE FROM Nicole C. Kear