Redemption and revenge, both achieved in one miraculous stroke of fortune a decade ago 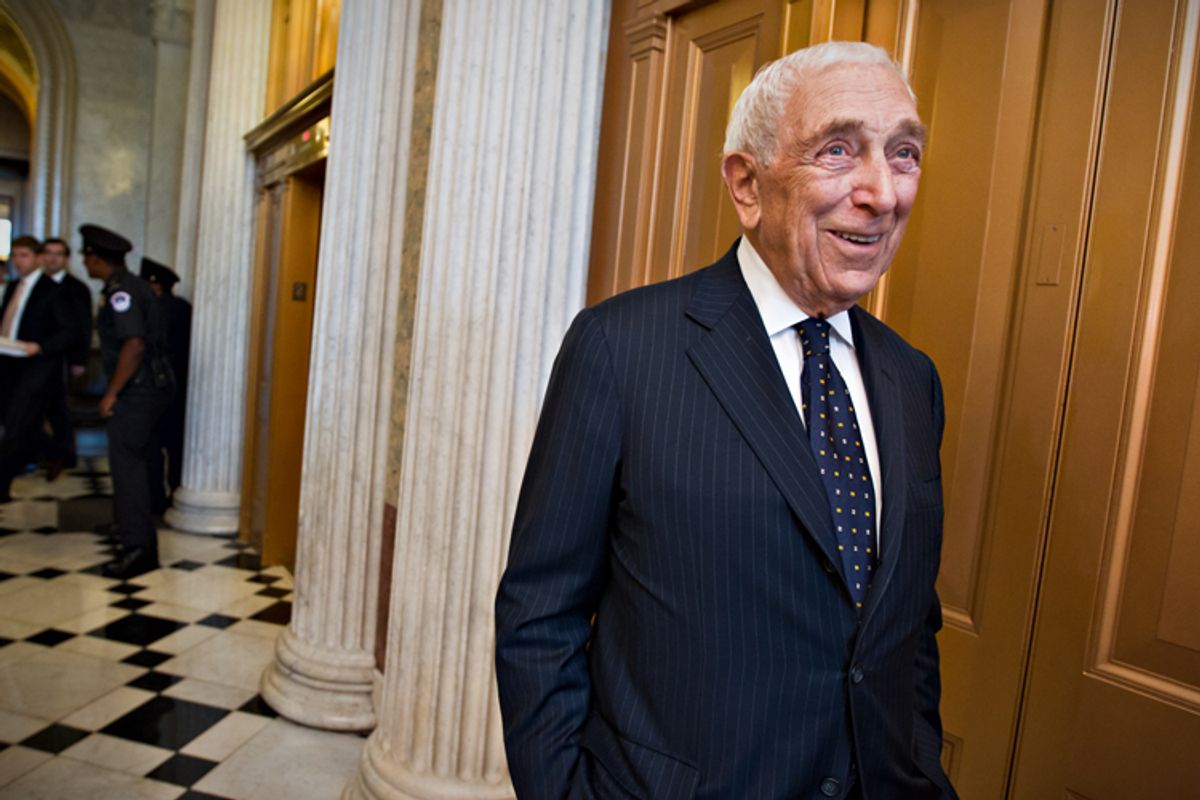 Late into his eighth decade in the world, Frank Lautenberg was living the life of a man filled with regret.

It hit him almost instantly, when he called a press conference in February 1999 to announce that he wouldn’t run for reelection to the Senate the next year. It seemed sensible enough. Lautenberg had been in Washington for 18 years, he’d just turned 75, and his state’s popular Republican governor, Christine Todd Whitman, seemed to be gearing up to challenge him in 2000. Money was a factor too: Lautenberg, who made his fortune as a founder of ADP, had plenty of it but didn’t want to throw it into another expensive campaign. Nor did he want to spend the next 18 months working the phones to scare up cash. So he called it a career and set his sights on an active retirement. When the press conference was over, though, he confessed to a friend that he’d just made a big mistake.

In the months after that announcement, Lautenberg toyed with abandoning his retirement plans and jumping back into the 2000 race. But even though Whitman passed on the race, there wasn’t any room on the Democratic side, not with Jon Corzine eagerly paying the asking price of every mover and shaker in the party. In January 2001, Lautenberg’s term ended and an unhappy retirement began. He turned 77 that month and he was trapped. Every day he missed the Senate, missed the spotlight, missed the game, but at his age there was just no way to get back in. It was over.

That unhappy retirement was well into its second year when the news broke on the night of July 30, 2002: The Senate ethics committee issued a scathing letter to New Jersey Sen. Robert Torricelli over lavish gifts he’d received (and failed to report) from David Chang, an imprisoned businessman who had sought his help in a dispute with the North Korean government. The letter “severely admonished” Torricelli, who was seeking reelection that fall, for his actions and made his ethical conduct the defining issue of the campaign. Torricelli sought to weather the storm, counting on the state’s blue tint to bail him out. But the odor of corruption was strong and polls showed him running even with his Republican opponent, Doug Forrester – and perilously far below the 50 percent mark.

Then, in late September, the death knell: the release by federal prosecutors of a sentencing memo that said there was “substantial corroborating evidence” for the explosive claims Chang had made about his relationship with Torricelli. WNBC, one of the New York network affiliates from which a disproportionate number of New Jerseyeans receive their state political news, devoted 40 minutes of its 11 p.m. newscast to an exclusive interview with Chang – “The Prisoner and the Politician,” the commercial-free segment was billed as. The bottom fell out. Democratic polls put Torricelli behind by double-digits. National Democrats panicked; control of the Senate was on the line and they could ill-afford to lose a seat in a state like New Jersey. State and locals Democrats were no less fearful. Scores of key county and municipal offices would be on the November ballot with the Senate race. Torricelli’s presence at the top of the ticket threatened the core of his party’s machine. There was a consensus at all levels of the party: Some way, somehow Torricelli had to go.

But it wasn’t that easy. The Democratic primary had been held months earlier, and he had won the nomination without opposition. The statutory deadline to switch candidates after the primary had also passed. Election Day was just five weeks away. There was also Torricelli himself: He showed no interest in quitting. And even if he did quit, who would Democrats replace him with at such a late date?

Democrats went one step at a time. Torricelli was no wealthy man. If he lost the Senate race, he’d need to scratch out a living. There was a carrot to dangle. If he dropped out, he’d have friends there to help him in New Jersey after the election. But if he stuck it out and took the whole party down – well … Word began spreading in Trenton on the morning of Sept. 30, a Monday: The Torch was going to play ball after all. That afternoon, with Gov. Jim McGreevey at his side and news crews from around the country in front of him, Torricelli tearfully ended his candidacy. “When did we become such unforgiving people?” he asked.

While Democrats exhaled, Republicans screamed. The ballot switch deadline had passed – and they sued to enforce it. The clock was ticking, though, so while the lawyers readied their arguments, attention shifted to the other outstanding question: Whom would Democrats seek to replace Torricelli with? On this subject, Torricelli himself had some opinions. On the "Today" show the next morning, he named three preferred successors – Reps. Rob Andrews and Frank Pallone and Joe Roberts, the second-ranking Democrat in the state Assembly.

Conspicuously – and not at all accidentally – absent from Torricelli’s list: Lautenberg. They had served together as senators for four years and their relationship was poisonous. Lautenberg saw Torricelli as an over-aggressive me-first politician who recklessly cut corners. When Lautenberg had been mulling retirement in 1999, Torricelli told the press that he had a better relationship with Whitman than with his fellow New Jersey senator. At the time, Torricelli was chairing the Democratic Senatorial Campaign Committee and Whitman was threatening to challenge Lautenberg. In front of their Democratic Senate colleagues, Lautenberg confronted Torricelli, who responded: “‘You’re a fucking piece of shit,’ he yelled, ‘and I’m going to cut your balls off!’”

Nor was Lautenberg the first choice of McGreevey and the other Democratic leaders who got to make the pick. At the urging of then-Senate Democratic leader Tom Daschle, they reached out to Bill Bradley, who’d left the Senate in 1996. He was a no. They offered the spot to Bob Menendez, then a rising Hudson County congressman. But Menendez was angling for a leadership slot in the House (caucus chairman – he ended up winning it by a single vote) and didn’t want to take a chance on an iffy five-week Senate campaign. Who knew if there’d be a public backlash if Democrats managed to get the switch approved? Pallone nearly said yes, but McGreevey’s inner circle was filled with Pallone’s confirmed enemies. Were they setting him up – enticing him to give up his safe House seat so they could screw him over in the Senate race and get rid of him once and for all? He too passed. Even Roberts, the state legislator, was considered, until Daschle made it clear that he was a nonstarter with Democrats in Washington.

Then, and only then, was the call placed to 78-year-old Frank Raleigh Lautenberg. His party was pretty much out of options. It was the kind of moment, you can imagine, that Lautenberg had dreamed of since his Senate term had ended, and now it was actually happening. On the night of Oct. 1, Lautenberg was driven to Drumthwacket, the official residence of New Jersey’s governor, and formally accepted the offer to lead the party’s ticket. He told the Star-Ledger that night, "I've lost none of the enthusiasm, none of the vigor, none of the energy that I had when I first ran in 1982."

A day later, New Jersey’s Supreme Court -- long a favorite target of conservatives, who considered it aggressively liberal – issued a unanimous ruling allowing the Lautenberg-for-Torricelli switch. A "full and fair ballot choice for the voters of New Jersey," was the court’s priority, according to its ruling. The decision was hot off the presses when Democrats staged a hastily arranged rally at the Trenton War Memorial, an un-retirement party for Lautenberg. "Are we ready to go to work?" he asked the crowd. "Are we ready to fight?"

And that, it turned out, was the hard part. Polls soon discovered that many New Jerseyeans didn’t even realize Lautenberg had ever left the Senate. Republicans labored to make the switch an issue, but within a week Lautenberg pulled ahead by around 10 points, and he never looked back. Torricelli did what he could to undermine his nemesis, but all that amounted to was denying Lautenberg campaign funds. He wasn’t about to campaign against him -- and if he had, it only would have helped Lautenberg. The race was called early on election night. In an almost unimaginable twist of fate, Lautenberg had undone the biggest mistake of his life and achieved both redemption and revenge.

When he reclaimed his spot in the Senate, it was pointed out to Lautenberg that he could still serve three more terms and not be as old as Strom Thurmond had been when he finally retired at the age of 100. At this he smiled. Frank Lautenberg had caught the break of a lifetime, and he was going to cherish it. He died a happy man on Monday. He died a United States senator.