Dear everyone: Chris Christie is conservative

UPDATED: How many times do we have to explain this? 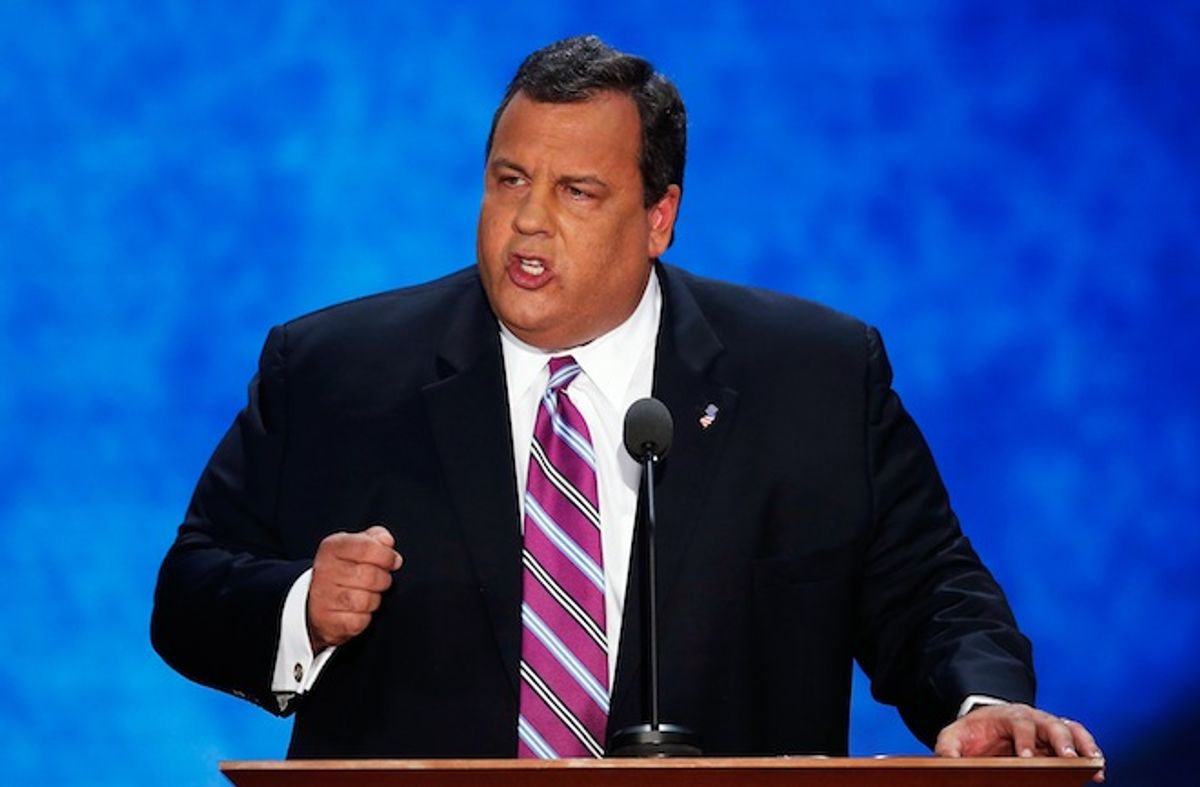 Chris Christie in swimming in Democratic money as he runs for reelection. His Democratic opponent, Barbara Buono, is ignored by the national press and the sort of people that would usually be writing checks for the Democratic challenger to a Republican governor in a large, liberal state.

Hugging Barack Obama was maybe the best political decision New Jersey Gov. Chris Christie has ever made, and he's made some very canny ones. I'm not saying his embrace of the president following Hurricane Sandy was entirely cynical, but it was very boisterous, and it continued through last week, when Obama visited the Jersey Shore and once again made nice with Christie before the national TV news cameras.

Here's what's odd about this Republican governor who currently seems much more popular with Democrats than national Republicans: He's quite conservative. Especially for the Northeast. That was, in fact, his original appeal, back when conservatives were thrilled about him: He's the most conservative possible successful statewide officeholder for a blue state like New Jersey.

In his first term, Christie torpedoed a much-needed mass transit tunnel project, same-sex marriage and early voting. He vetoed a minimum wage hike. He vetoed legislation designed to eliminate the gender wage gap. He withdrew from a regional carbon cap-and-trade agreement. He killed a Jersey version of the DREAM Act and cut funding for women's health services, including eliminating funding for Planned Parenthood. Remember how pissed everyone got when Republicans in the U.S. House of Representatives tried to do the same thing? Many liberals seem to give Christie a pass for his antiabortion views that they'd never give a "red state" Republican. (This is maybe because he used to be pro-choice, meaning he made the exact switch on the issue everyone trashed Romney for making.)

He's not even consistently rhetorically moderate. In the past, while flirting with running for president, Christie has expressed doubts about evolution (which truly makes no sense, for a mainstream Catholic). He's randomly vacillated on whether climate change is real or caused by humans, telling a town hall in 2010 that he didn't believe in it, then in 2011 deciding that he did, and now simply dismissing the issue as a "distraction."

Christie killing the Hudson tunnel project happened years ago, but it perfectly encapsulates his philosophy and governing style. It was bad policy: The federal government was desperate to spend money on the project, and at this point the only plan for relieving congestion on the two century-old tunnels shared by New Jersey Transit and Amtrak is Michael Bloomberg's fantastical plan to extend New York's subway to Secaucus -- an idea that seems to befuddle the cash-strapped MTA. And it was done for a bad reason: To prevent gas taxes from having to rise to cover the state's Transportation Trust Fund shortfall. Because killing a rail project in order to keep gasoline artificially cheap in the only region of the country where rail travel is common and popular wasn't bad enough, the Government Accountability Office then outright accused Christie of lying about the project's costs and the amount that the state would have to cover. Though perhaps he was being more honest when he explained that he killed the project because his former bond trader wife didn't feel like walking all the way from Herald Square to Penn Station. No one in Christie's national press fan club cared, obviously. (I imagine many of them are more likely to cross the Hudson in Town Cars.) It's rare that a governor has an opportunity, especially so early in his term, to screw generations of future residents of his state. Christie seized on the chance.

For some reason it's been all but forgotten that Christie's entire appeal, in the early days, was his endless, theatrical bullying, much of it staged for cameras and most of it directed at teachers and public servants. These increasingly desperate performances largely stopped once New Jersey residents began growing bored with them, but the sentiment underlying them -- utter contempt for public servants -- continued guiding Christie's political decisions. He's not just an "education reformer" (which is, anyway, a rich Democrat priority as much as a Republican one) he is an advocate of, essentially, the outright privatization of public schools, and allowing for-profit companies -- like the for-profit education companies he used to be a registered lobbyist for -- to run them, with, obviously, taxpayer funds.

Plus, my god, he's raised money and campaigned for (his good buddy) Steve King, the Muslim-hating Iowa madman. Here's a perfect example of the limits of the "reasonable Republican" trope: One of the undeniably best things about Christie is his refusal to promote Islamophobia. He is also using his influence and national stature to ensure the continued reelection (and possible promotion to higher office!) of a modern-day McCarthyite bigot. Every major figure in the contemporary GOP bears some responsibility for the fact that nuts and bigots dominate the party, but Christie directly supports one of the worst of them.

This is what's going to happen next: Chris Christie is going to appoint a Republican to represent New Jersey in the United States Senate, in the place of the late Frank Lautenberg. Christie's appointee will shrink the Democratic majority and make Republican obstruction of the Democratic agenda just a bit easier. The person Christie appoints will likely immediately be a key vote on immigration reform. They will likely assist Senate Republicans in blocking the president's judicial nominees and political appointees. Even if Christie appoints the most moderate possible Republican, we have seen, these last few years, how "moderate" Republicans exist primarily for pundits to point to as examples of moderation, as they enable and sometimes join the total political war on the Democrats.

When Christie appoints a Republican, it probably won't much hurt his career. Wealthy Democrats will likely continue donating to him. Misguided liberals and pundits will continue to say he's not that conservative. The only complication is that New Jersey law is contradictory on the subject of how long the appointee would serve before facing an election. One law would keep the appointee in office through 2015. The other law would require a special election this year -- the year Christie is also up for reelection. Christie, as Steve Kornacki points out, would probably rather have his appointee not be up for election against a Democrat on the same ballot that has Christie up for reelection.

Regardless of what happens, Christie will likely win this November with Democratic votes and (lots of) Democratic money. And then he'll have plenty of time to make himself more palatable to national conservatives in time for the 2016 primaries. He'll have a lengthy conservative record to point to, as well as crossover appeal that Republicans would be idiotic to ignore.

Update: Christie announced his plans for the vacant Senate seat this afternoon. He will appoint a placeholder soon (a Republican), then hold a primary on August 13 and a special election on Wednesday, October 16. This is sort of a curious plan, as it will likely ensure that the seat ends up going to a Democrat (perhaps Christie ally Cory Booker), and it will end up costing the state much more than it would to have the Senate general election happen in November, but this way the Senate race won't be on the same ballot as the gubernatorial race. As my friend Steve explains, Christie is hoping that he wins with a large enough landslide to swing the state legislature to the Republicans. Christie also attempted to sell this idea, which seems engineered to provide him the greatest political benefit, as another example of his populist, post-partisan pragmatism.