Obama's three new judicial nominees are qualified -- but Republicans will block them anyway. Here's why 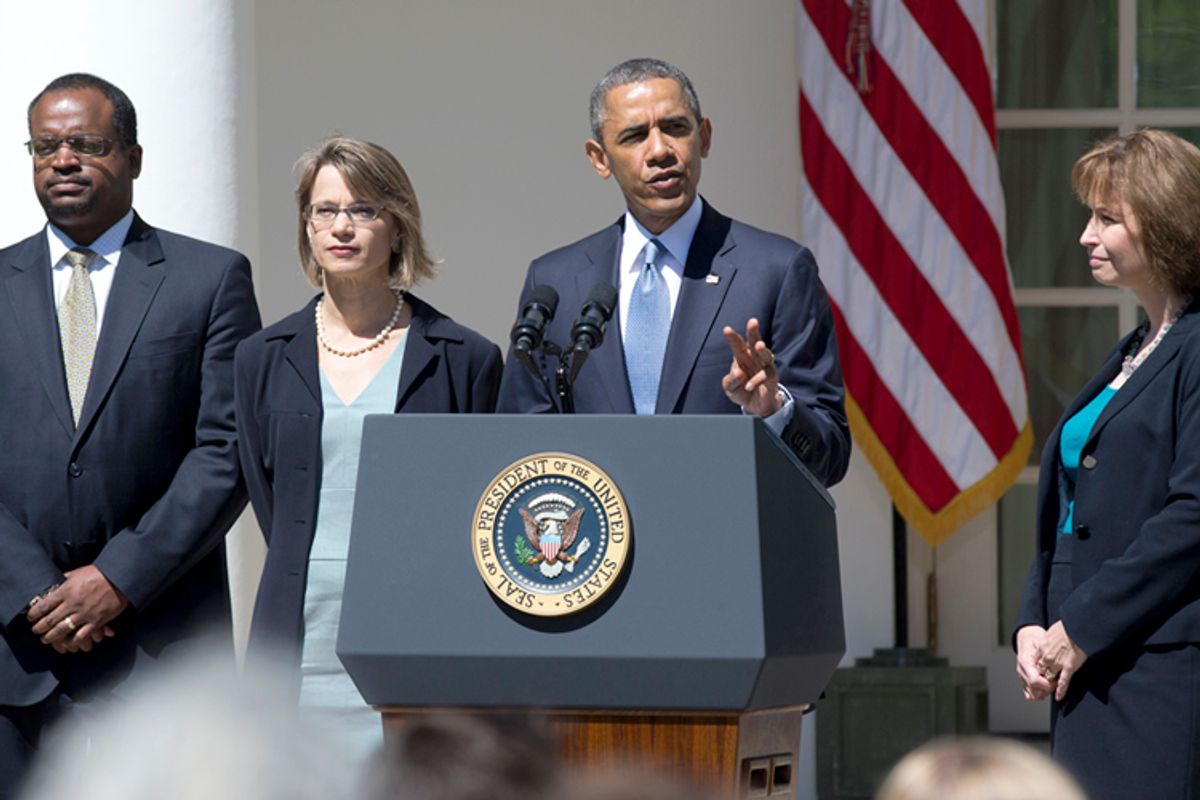 Barack Obama announces the nominations of Robert Wilkins, Cornelia Pillard, and Patricia Ann Millet, to the U.S. Court of Appeals for the District of Columbia Circuit, June 4, 2013. (AP/Manuel Balce Ceneta)
--

President Obama nominated three highly qualified people to fill vacancies on the U.S Court of Appeals for D.C. today, but the looming battle over the nominations will likely have nothing to do with the individual candidates themselves.

In the procedural arcana of presidential nominations, today's Rose Garden announcement of three simultaneous appointments was like a gloved slap to the face of Senate Republicans, who have been threatening to filibuster anyone Obama appoints.

They'll have difficulty painting these nominees as liberal extremists.

The hardest to block may be Judge Robert Wilkins, since the Senate already confirmed him "without opposition or debate" just two and half years ago for his current job as a trial judge on the U.S. District Court in D.C. Since his December 2010 confirmation, his highest-profile action has been presiding over the trial of former Democratic congressman Jesse Jackson, but he also rejected a key provision of the Dodd-Frank Wall Street reform law. Under George W. Bush, Wilkins served on a presidential commission on the establishment of the Smithsonian National Museum of African American History and Culture.

Incidentally, he won a landmark racial profiling case in 1992 against the state of Maryland, where police officers had been told to be on the lookout for black males driving expensive cars.

Another nominee, Georgetown Law professor Nina Pillard, is also highly regarded for her work as an academic and in the solicitor general's office. While she's progressive, she's well respected as being a fair legal thinker. For instance, she chaired a reading committee for an American Bar Association panel that determined that Bush nominee Sam Alito was “well qualified” to sit on the Supreme Court -- the highest rating possible.

The third nominee, Patricia Millett, served in the solicitor general's office for over a decade -- including for most of the Bush administration, leaving in 2007 after being appointed by President Clinton. In that capacity and in private practice, she's argued before the Supreme Court 32 times -- the second-highest number for a female lawyer.

But the nominees' qualifications may be irrelevant to their confirmation proceedings. "I think the line will go something like this -- these may be highly qualified candidates, but this Court of Appeals has all the judges it needs right now," Brookings Institution fellow Russell Wheeler told Salon.

Indeed, Senate Republicans have been trying to eliminate the three vacancies entirely in the name of efficiency and saving the government money, a thinly veiled "red herring," as Wheeler said, aimed at preserving the court's current conservative majority. "It sets up this rather convenient and -- on the face of it -- nonpartisan reason for opposing these candidates," he explained.

As we've noted, the Circuit Court of Appeals for D.C. is widely considered to be the second most powerful court in the country, with power over federal regulatory issues, so the stakes couldn't be higher as it's expected to deal with key Obama agenda items like the Affordable Care Act and future EPA regulations to curb greenhouse gases. Right now, conservatives have an effective 9-5 majority on the court, and want to avoid putting three new liberals on the bench by any means necessary.