No, Neil Munro. Depression isn’t another word for “stress”

To score political points, a Daily Caller reporter bullies people who suffer from mental health issues -- like me 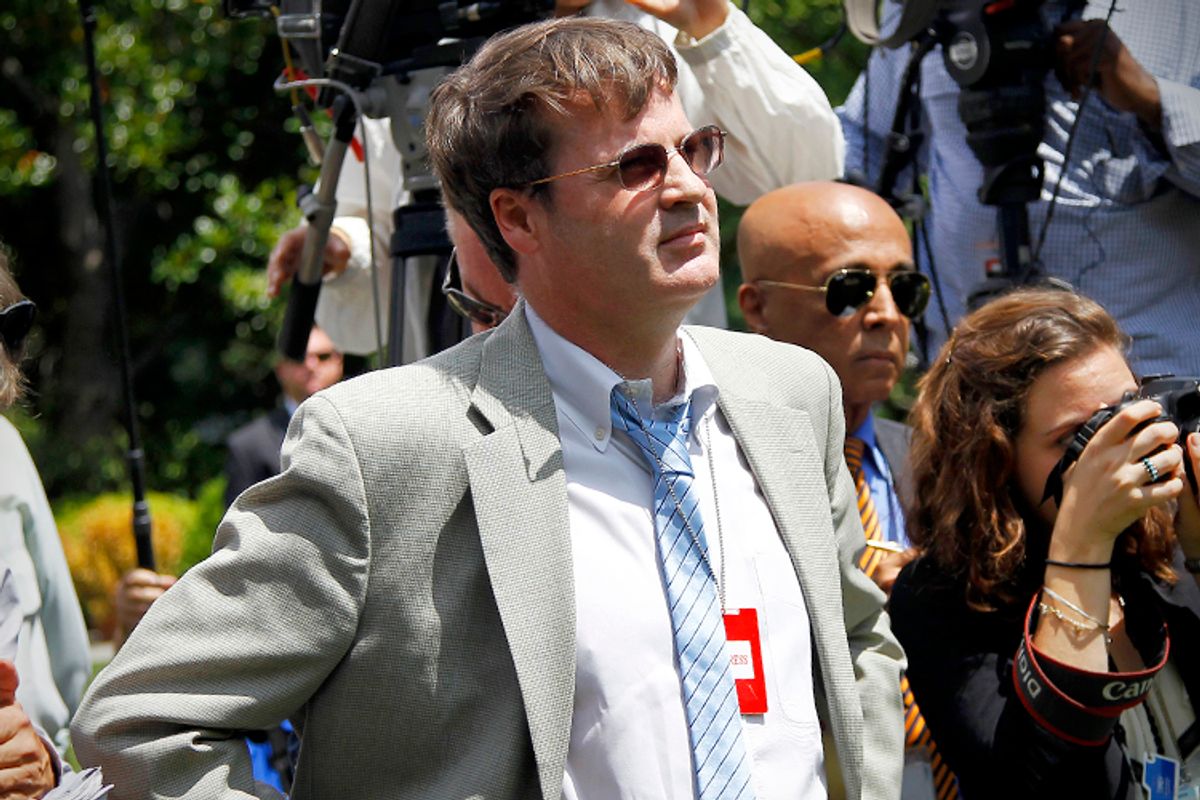 There was a toxic combination of ignorance and dangerousness contained in the“report” Monday by the Daily Caller's Neil Munro about President Obama’s modest event addressing mental illness. The president was urging Americans to lift the stigma that accompanies diseases of the mind, and Munro was determined to do whatever he could to make sure that stigma sticks.

Everyone who suffers from depression has tried to find just the right metaphor to describe the pain we experience. For me, the most effective image has always been the bottom of a deep, dirt-lined well. When I’m in the throes of a particularly nasty episode, my perception feels narrow, blocked as though I’m looking out through a hole far above my head. Everything I need to do and everything that would make my life better lies outside that hole. Trying to reach those things is futile; the walls would just crumble under my fingers if I attempted to climb. Why even bother trying?

Getting that image right is critical. Without it, it’s nearly impossible to explain to people who have never gone through what you’re going through that no, you aren’t just sad and no, you can’t just pull yourself out of it. There isn’t a depressed person alive who hasn’t been forced to explain the difference between a rotten mood and a clinical illness. Most of the doubt comes from well-meaning ignorance. But description of mental illness from Munro is something entirely different, something willfully cruel:

The broad definition of “mental illness” is set by the professionals who provide government-funded services to Americans.

In recent decades, the professionals have broadened the definition from severe, distinct and rare ailments, such as schizophrenia and compulsive behavior, to include a much wider set of personal troubles.

Those broader problems include stress and sadness, which are medically dubbed “anxiety” and “depression” by professionals....

Americans have typically responded to stress and sadness by urging stoicism, hard work, marriage, prayer and personal initiative, and by stigmatizing unemployment and passivity.

Munro briefly became famous-for-DC in June 2012, when he interrupted President Obama to shout questions in the middle of a presidential statement on immigration policy. He defended his rudeness as journalism, but yesterday’s story put to rest any lingering possibility that Munro has even a passing interest in producing actual news. His sneering attack on the very practice of treating mental illness was an attack on the idea of journalism; he invented not just facts but an entirely false theory of how the human mind functions, all in the service of scoring cheap political points against a president he hates.

His depictions of depression and anxiety are genuinely malicious. He puts them in direct opposition to classic American values: hard work, marriage, and initiative, and conflates them with “unemployment” and “passivity.” The message is clear: depression isn’t real, and if you think you have it, it’s entirely your fault. Munro’s schoolyard bullying isn’t just nasty and petty. It’s dangerous.

I’m lucky. As depression goes, my suffering is relatively mild. Episodes rarely last longer than a few weeks. I’ve learned to recognize them for what they are, and while that doesn’t fix the problem, it does help put it into perspective. When I’m at the bottom of that well, nothing I do seems worthwhile. But I know it will pass. I’m not stuck there for months or years at a time. I’m not crushed to the point where I can’t function. The walls of the well don’t cave in on me the way it does others.

I’ve never seriously considered ending my life, but lots of depressed people do. It’s hard to imagine something more likely to push someone over the edge than blaming them for their own suffering. When you’re depressed, your brain tells you everything in your life is going wrong, that it’s completely your fault. When ignorant fools like Munro validate that impression and confirm that all your problems are a result of your own laziness and ineptitude -- something you already believe -- it can send you down a spiral that some people can’t escape. And sometimes, those people die.

Munro is right about one thing: psychiatry didn’t always recognize depression as a legitimate disorder. It made it into the DSM, psychiatry’s bible, in 1980. Before that, millions of Americans suffered the kind of blame and derision Munro casually tossed their way yesterday. Now we know better. Chances are Munro knows better, too.

But there are people, probably including many of Munro’s readers, who don’t. Some of those people are in real pain. Some of them need help. And there’s a decent chance that some won’t seek out the help they need because they believe what Munro wrote. His petulant, childish screed against the reality of mental illness was an attack on President Obama thinly veiled as a straight news report. It might do some real damage, but not against the target he was trying to hit.