The farce that is Darrell Issa

He's a buffoon whom even some in his own party attack. But make no mistake: He is a symbol of today's GOP 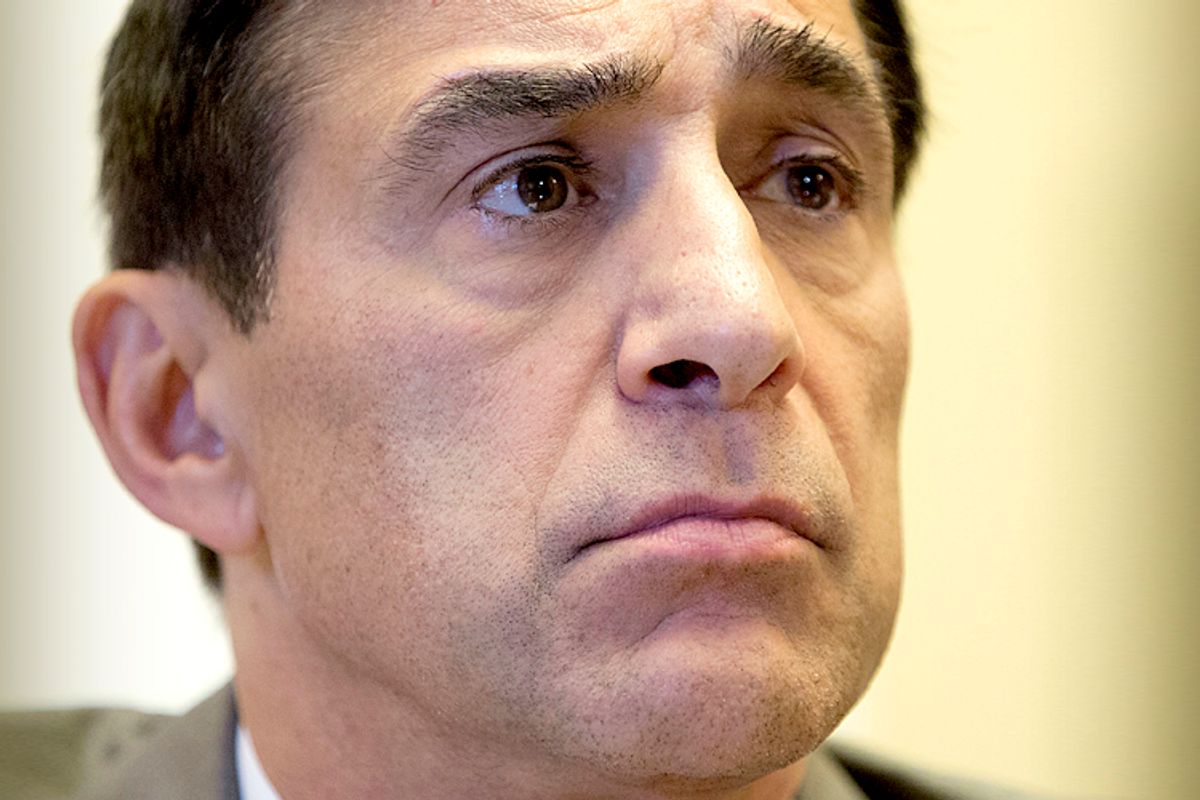 The only thing that makes Rep. Darrell Issa remotely qualified to chair the House Oversight Committee is his personal familiarity with the investigative process – on the receiving end. The man Republican House Speaker John Boehner put in charge of investigating government wrongdoing was himself indicted for stealing a car, accused of stealing at least one other car, arrested for carrying a concealed weapon, and twice suspected of insurance fraud – and once extensively investigated by authorities for arson, because his former business associates accused him, on the record, of burning down a building to collect the insurance payout.

Democrats love to hate the silly, camera-chasing Issa, who came to power in 2011 promising to put the White House under generalized investigation. But now even some Republicans are happy to criticize Issa too. It’s easy for them to denounce his calling Jay Carney a “paid liar,” as well as his evidence-free claim that the IRS mess was directed from Washington, D.C., while they continue to participate in smearing the White House with non-scandals themselves, nonetheless.

Issa’s extremist idiocy lets "reasonable" Republicans denounce him and/or his rhetoric, while they continue their own ethically, intellectually and politically blinkered crusades against President Obama. Sure, Sen. John McCain says it was wrong to call Carney a “paid liar” – but also on MSNBC’s “Morning Joe,” he compared the IRS mess to Ronald Reagan’s deadly Iran-Contra scandal. Um, no.

Scandal-drunk Sen. Lindsey Graham says Issa went too far when he said the IRS agents who keyword-targeted Tea Party groups “were directly being ordered from Washington.” But he continued to hype the IRS story. "At the end of the day, the IRS scandal really is scary,” he told Fox’s Brian Kilmeade. “How would you like your own government to turn on you?" Is that really what happened, Lindsey Graham? And if so, it happened most brutally to a Democratic group, Emerge America, which had its tax-exempt status revoked.

Of course, McCain and Graham are also the guys who brought us the ultimate non-scandal: Benghazi. Issa’s idiocy lets them retain their role as “statesmen,” gets them invited back on the Sunday shows, and gives the media an excuse to consider them arbiters of what’s politically acceptable – while they’re themselves on the right fringe. Of course it’s guys like Issa who constantly move that standard of what’s politically acceptable to the right.

Honestly, when David Plouffe started raising Issa’s past on ABC’s “This Week,” and then on Twitter, part of me winced. But that’s because I didn’t completely remember Ryan Lizza’s amazing Issa profile in the New Yorker – which was respectful while also documenting Issa’s troubling history with law enforcement – as well as my own life in California during the surreal 2003 recall of Gray Davis (another example of GOP nullification of election results, by any means necessary, usually big money).

Issa financed the recall, and hoped to run for governor himself, but then the Los Angeles Times and other California papers began reporting on his earlier legal troubles. There was particular attention to his indictment for grand theft when he reported his Mercedes stolen after his brother William sold it; William had earlier obtained the right to do so from his brother. The two men had different stories for a while, and authorities believed they’d conspired to sell the car, report a “theft” and collect insurance on it.

(I personally think the arson investigation was even more damning: An Issa colleague gave investigators vivid detail that indicated his car-alarm factory had been intentionally torched, after Issa increased his insurance from $100,000 to $462,000. “Quite frankly,” Joey Adkins told authorities, “I feel the man set the fire.” But the local fire marshal never determined the fire’s cause.)

In the end, the scrutiny doomed Issa’s chance to run for governor – but his wealth funded the successful recall of Davis. Sure, Issa could continue to hold his House seat in his conservative San Diego district, but a guy as ethically compromised (and as blinkered ideologically) as Issa could never win a statewide election in California – let alone a national one. So he tearfully stepped aside for Arnold Schwarzenegger.

Sen. Chuck Schumer got a lot of attention Monday for telling “Meet the Press’s” David Gregory that Issa’s overreach is setting up a GOP loss in 2014 – just like the impeachment witch hunt against President Clinton set up his party’s historic gain of seats in the 1998 midterms. I hope Schumer’s right. But I find myself taking little comfort even in that uncertain outcome.

Democrats, including myself, like to declare that impeachment didn’t resonate with the American people, who gave Clinton ever-higher approval ratings as the witch hunt continued. And yes, Clinton’s party won seats in the ’98 midterm. But impeachment, and the myriad baseless investigations that preceded it, from Whitewater to Travelgate to alleged Chinese fundraising scandals, preoccupied both the White House and the media, to the detriment of Clinton’s agenda, particularly in his second term. They certainly didn’t help Vice President Al Gore in his campaign to win the presidency.

While I’ve always rejected the claims of some anti-Clinton centrist Democrats that Clinton’s philandering cost Gore the election, there was at least some polling that suggested it hurt Gore with suburban women. Certainly the cloud of scandal – and the stalling of the Clinton-Gore agenda – couldn’t have helped Gore, who won the popular vote and by reliable accounts the electoral vote in a race that shouldn’t have even been as close as it was, given the strength of the economy and the deficits of George W. Bush. I would argue that Clinton’s experience proves GOP scandal-mongering works – and once again, the media let the party get away with it.

I’m happy even some mainstream media pundits are warning that Issa’s overreach could hurt the GOP in 2014. And yet that new rhetorical twist puts the focus on horse race politics, where all of journalism appears most comfortable today. Issa’s extremism may or may not hurt his party at the polls. All I know is it should be hurting him, and the GOP, more with the American people, when they think about what they want in their leaders.