Tear gas is no humanitarian weapon

As protests rage in Turkey, it's time we re-examine one of the world's most popular anti-riot measures 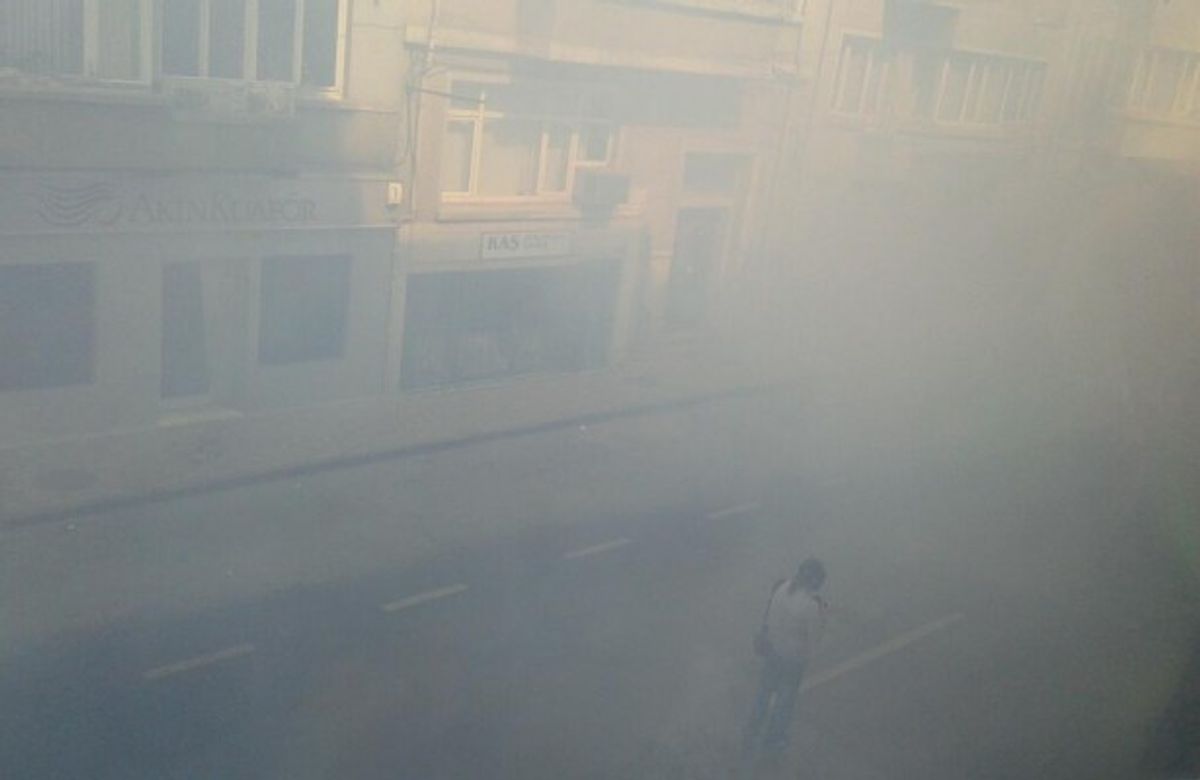 @ekizilkaya: “Police used tear gas near a labor union to stop #mayday demos reach Taksim Square. How much? This.” (Twitter/guventurks)
--

Over the past five days Turkey’s government has unleashed thousands of canisters, cartridges and helicopter drums of tear gas onto its people. This has resulted in hundreds of tear gas-related injuries. Protesters have been repeatedly shot directly and intentionally in the face with canisters, and in at least one instance this has caused permanent damage to the eye. On May 31, two journalists were hospitalized for head wounds from tear gas projectiles. Tear gas has also been fired into enclosed locations, a practice designed to torture and able to kill.

Turkey’s police forces are known to be quick to use tear gas. Recently, protesters at a political trial and Syrian refugees faced tear gas as well. The current wave of tear gassing in Turkey began on May Day, when thousands of protesters were gassed in a government crackdown. Then, on May 31, environmental campaigners camping in Gezi Park to protest the demolition of park area for a proposed shopping mall found themselves engulfed in gas as well. In a dawn raid, the police surrounded the encampment, firing tear gas and water cannons at peaceful demonstrators.

With mass protests in Turkey now entering their fifth day, resistance grows and the issues are broadening to target neo-liberal agendas and the repression of democracy. People continue to face tear gas in addition to water cannons, baton chargers, rubber bullets and live ammunition. And this is just in Turkey.

Over the past week there have been news reports of tear gas deployments in Tunisia, Uganda, France, Germany, Palestine, Hungary and the United States. Since January 2013, tear gas has been deployed in over 40 different countries from China to Zambia to Canada. The vast majority of these uses were against nonviolent protesters. Yet as gas is used to suppress dissent around the world, questions about its design, deployment, health effects and legality remain largely unaddressed.

What we generally refer to as tear gas is actually not gas at all. Rather, the chemical compounds referred to as “tear gas” — including pepper spray, CS and mace — are tiny droplets of moisture released as a fog or a spray into the air. Classified by law enforcement officials as a “non-lethal weapon,” or even more euphemistically as a “riot-control agent,” tear gas causes chocking, burning, vomiting and eye watering. Early tear gases were developed in World War I to diminish soldiers’ willpower and lure them out from the trenches, allowing for more aggressive forms of gassing and artillery fire. Today tear gases continue to serve these wartime functions, despite authorities’ claims to their “non-lethal” and even “gentler” nature.

A major cause of injuries from tear gas, as seen in Turkey, is when a canister strikes a person in the head. These casualties are usually deemed the result of “improper use.” But it is no accident that tear gas projectiles become targeted at people. They were originally designed and promoted for use as short-range firearms. Early models were called “tear gas guns” and there was even a tear gas “machine gun” made by Manville Manufacturers, the company responsible for bringing the “street sweeping” Manville machine gun to the market in the Prohibition-era United States. For the past 80 years, there have been steady reports of lost eyes, cranial damage and deaths due to the use of tear gas launchers as assault rifles.

Also high on the agenda of campaigns like Facing Tear Gas, recently launched by the War Resisters League, are concerns over whether these chemicals’ are really “safe,” as proponents claim. Studies in major medical journals — including the BMJ, the Journal of the American Medical Association and the Bulletin of the Atomic Scientists —continue to conclude that more research must be conducted into the health effects of tear gas. There is limited medical understanding of the effects of the gas in real-life deployments and virtually no data have been collected on the long-term health effects of tear gas.

This is particularly troubling for populations that face tear gas attacks over a sustained period of time. People locked up in prisons, for instance, are often confronted with tear gas, and, since prisoners are kept in confined spaces, the deployment of tear gas becomes even more dangerous. Also facing repeated tear gassing are those living in refugee camps and occupied territories. There are Palestinians who have been facing recurrent tear gas attacks since the 1980s.

When there are government inquests into tear gas, the reports frequently cite outdated military research and partisan military experts on chemical safety. Many draw from unethical laboratory tests conducted at sites like Porton Down. At the same time, the findings of human rights groups like Amnesty International, Physicians for Human Rights and the United Nations go virtually ignored. For nearly 100 years, these organizations have been recording abuse, injury and death due to tear gases to little avail.

The tear gas industry has long profited on alliances between militaries, governments and big business. The move to create a transnational market for tear gas was spearheaded by General Amos Fries as early as 1919. A leader in gas defenses during World War I, Fries assembled a team of former chemical officers after the war, including a publisher and a wealthy lawyer. These men met at the Yale Club to plot the making of a domestic tear gas market.

Tear gas was first used in the United States to break worker’s strikes and later to quell uprisings in colonized territories abroad. Protecting the interests of elites, the ethics of tear gas sales raised enough of an alarm to prompt a Senate subcommittee to hire investigators, who found that between 1933 and 1937 over $1.25 million (about $21 million today) worth of “tear and sickening gases” had been purchased “chiefly during or in anticipation of strikes.”

The majority of the world’s tear gas trade continues to come from the United States,along with Brazil and Israel. In recent conflicts, U.S. exports of tear gas to Egypt and Bahrain came under international scrutiny as police forces used canisters as bullets, deployed expired gas and fired gas into tightly enclosed locations, leading to serious injuries and reported deaths, particularly of children.

It is not difficult to trace tear gas deployments back to corporate profiteers. Over the last 12 years Turkey has imported 62 tons of tear gases, spending $21 million. The gases being used on protesters are coming from at least two American companies — Defense Technology (in Casper, Wyo.) and Nonlethal Technologies (Homer, Pa.) — as well as one Brazilian company, Condor Non-Lethal Technologies in Rio de Janeiro. Activists and citizen-journalists in Turkey have been recording images identifying tear gas manufacturers over Twitter, Flickr and on blogs — a tactic frequently used in Egypt.

The all-too-familiar images of streets covered in toxic clouds should echo as a message from the trenches. Soldiers have known all too well that when tear gas fills the air, there is likely something more deadly to follow. Far from a humanitarian weapon, it is time that we see tear gas as a sign of just how inhumane capital-driven visions of keeping the peace have become.