The most spoilery parental guidelines on "Game of Thrones"

The "violence" and "sexuality" warnings may protect kids, but they also let adults know what's going to happen 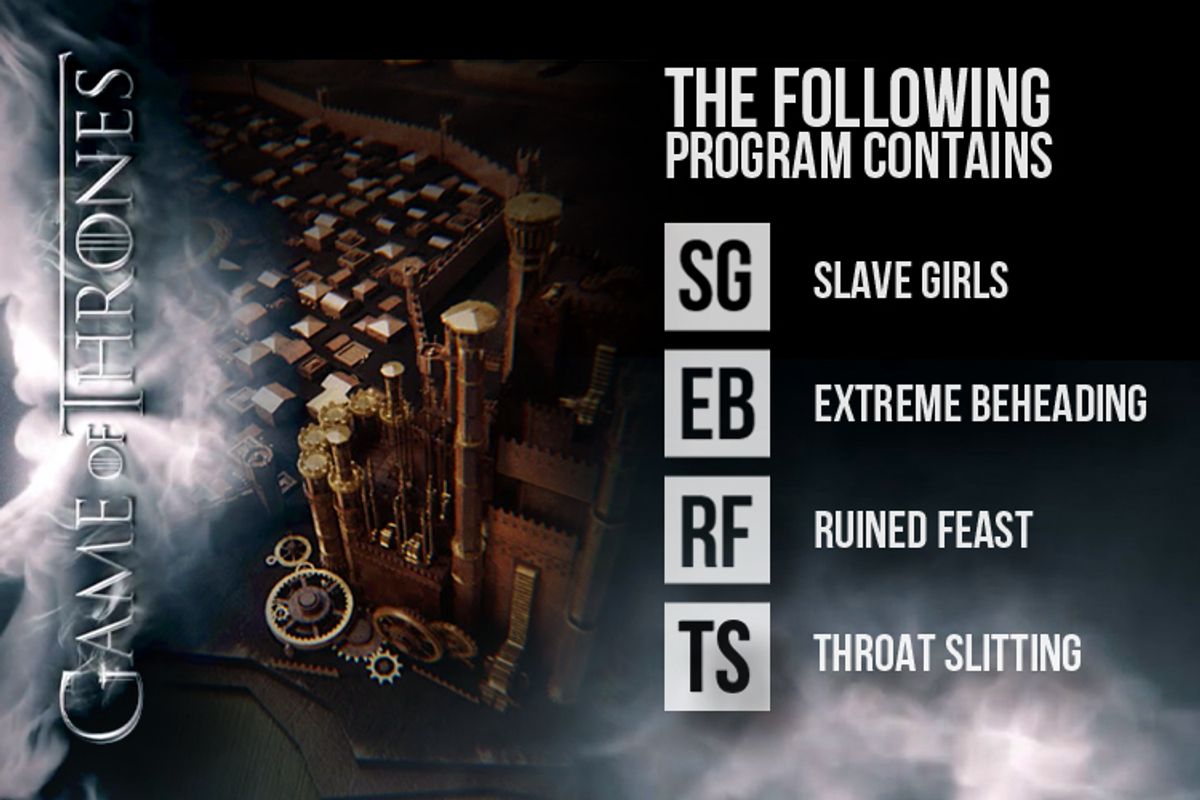 "Game of Thrones" is, if not exactly raunchy, one of the most envelope-pushing shows on the air, with violence and/or sex in practically every episode. That "and/or" is instructive -- episodes often push violence more than sexual content, or vice versa. And you can tell exactly what kind of episode it's going to be before the action starts.

That's right: HBO doesn't merely present the "TV-MA" designation before its shows -- it also lists exactly the sort of mature-audiences-only action that's going to go down. In the last 19 episodes (all of seasons 2 and 3, so far), every single episode has featured "adult language" and "adult content"; four contained "strong sexual content"; 18 contained "violence" (in nine of those instances, "graphic violence"); 14 featured nudity (in one instance "brief nudity").

If "graphic violence" is left off the table, viewers can safely presume the episode is merely scene-setting for the battles to come; if there's no nudity, the show's about to spend time on the more violent pursuits of Westeros (and a certain segment of the viewing public might as well shut the sets off). HBO used to spoil when Richard Jenkins' dead-dad character would be returning by crediting him as a guest star in the "Six Feet Under" opening credits, but at least this feels like it's serving a purpose -- helping whatever parent is otherwise uninformed enough to consider letting the kiddos watch "Thrones" -- while hinting at the episodes' content for the rest of us. Here are this season's advisories, compared against what happens after the episode actually begins.

Racy moments: The show came back in a big way with violence and nudity -- its two stocks-in-trade! Airing this parental advisory before the show felt like a mission statement. But the episode was heavier on the violence -- the White Walkers kill a bunch of people early on, a reassuring sign that the show was back.

Racy moments: As the surprisingly bland guidelines indicate, this early-in-the-season episode was mainly scene-setting, with little actual action of any sort. The swordfight between Jaime and Brienne might be scary for kids?

Racy moments: Jaime loses a hand, in a climactic moment the very eagle-eyed would be waiting for, wondering when things would get graphic.

Racy moments: The centerpiece of the episode is Daenerys turning her dragons on a slave-trader. It's not particularly violent or in any way sexy -- safe to watch with the kids, if they can read subtitles or speak High Valyrian!

Racy moments: Oddly, this episode may be most memorable for Jon Snow's losing his virginity at last. Perhaps it wasn't coercive or icky enough, as in other episodes' sexual content, to get the "Strong Sexual Content" banner.

Racy moments: Theon is brutally tortured and Ros is killed; the viewer who noted the guidelines at first could've known this would be a grim one.

Season 3, episode 7: "The Bear and the Maiden Fair"

Racy moments: Violence and sex go hand-in-hand here, as Theon is serviced by two women who go on to aid in his forced castration.

Racy moments: See the previous episode -- a man is seduced in order to steal his blood with leeches. Maybe more gross than graphically violent.

Season 3, episode 9: "The Rains of Castamere"

Racy moments: The sense of foreboding in these stripped-down guidelines wasn't misplaced: This was the Red Wedding.