The arch-conservative is suddenly siding with left-wing justices in a raft of Fourth Amendment cases. Here's why 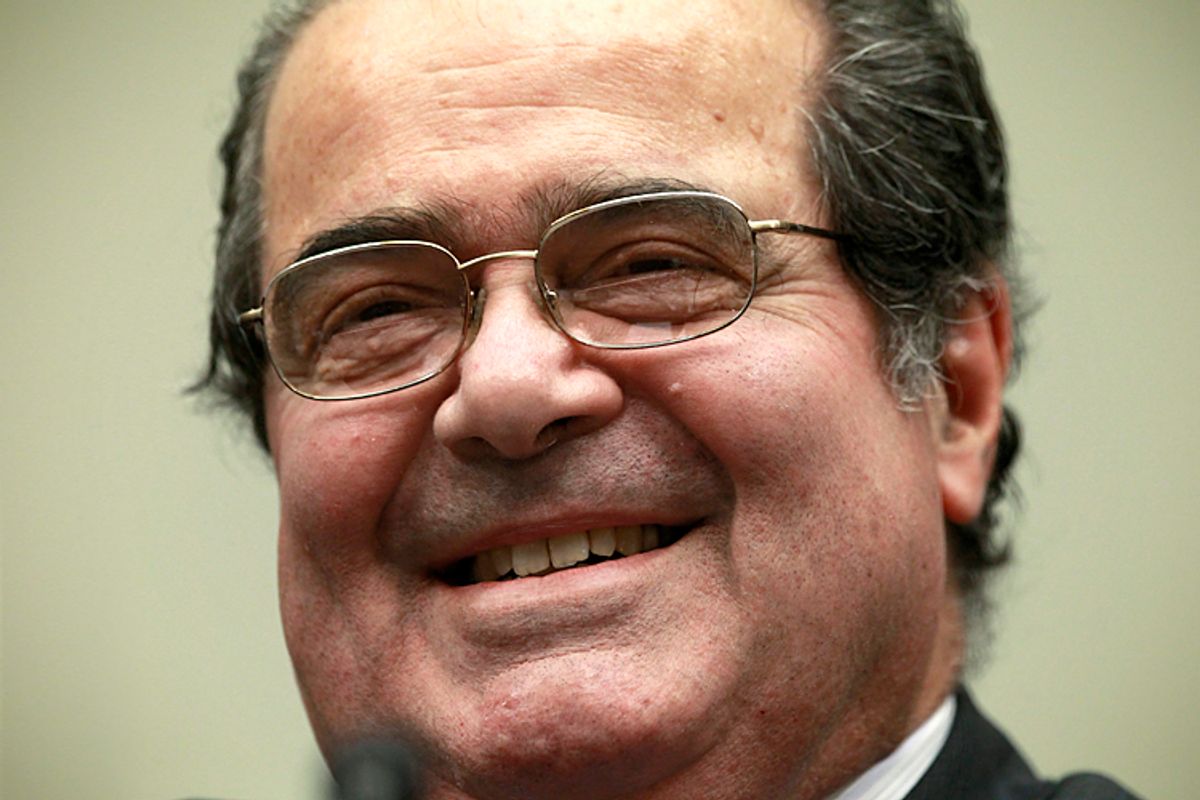 Antonin Scalia, for various reasons, is not the left's favorite Supreme Court justice. But in a spate of rulings in this term, Scalia has come down on the same side as some of the more liberal justices on the Court -- those cases related to Fourth Amendment issues, particularly involving warrantless searches conducted using advanced technological methods.

The most recent example of this is the 5-4 decision that came down on Monday, in which the Court upheld a Maryland law allowing police officers to take DNA samples of arrestees without a warrant, for the purposes of investigating crimes unrelated to the arrest. Scalia dissented with an opinion joined by Justices Sonia Sotomayor, Elena Kagan and Ruth Bader Ginsburg.

"Today’s judgment will, to be sure, have the beneficial effect of solving more crimes," Scalia wrote in his dissent. "Then again, so would the taking of DNA samples from anyone who flies on an airplane (surely the Transportation Security Administration needs to know the 'identity' of the flying public), applies for a driver’s license, or attends a public school. Perhaps the construction of such a genetic panopticon is wise. But I doubt that the proud men who wrote the charter of our liberties would have been so eager to open their mouths for royal inspection."

This ideological breakdown is not as unusual as one might think when it comes to Fourth Amendment issues. The phenomenon, which was noted on the Volokh Conspiracy by Orin Kerr of George Washington University Law School, as well as at the Wall Street Journal, also finds Justice Stephen Breyer, usually a reliably liberal vote on the Court, siding with its more conservative members.

In one case from March, for instance, in a 5-4 vote, the Court, in an opinion written by Scalia, held that a police officer's use of a drug-sniffing dog in the area surrounding a home constitutes a Fourth Amendment "search" and so generally requires a warrant. Kagan, Sotomayor, Bader Ginsburg and Clarence Thomas all joined the opinion. In another case from February, the Court ruled 6-3 that police can't detain someone once he or she has left the immediate vicinity of a premises that is about to be searched. Breyer, Thomas and Samuel Alito were in the dissent.

One case from January 2012 found the Court ruling unanimously that police need a warrant to attach a GPS tracker on a suspect's vehicle, though the Court split on the reasoning. “We hold that the government’s installation of a GPS device on a target’s vehicle, and its use of that device to monitor the vehicle’s movements, constitutes a ‘search,’ ” Scalia wrote in the majority opinion, and was joined by Chief Justice John Roberts, Anthony Kennedy, Thomas and Sotomayor.

Justin Levitt, an associate professor of constitutional law and criminal procedure  at Loyola Law School in California, told Salon that he'd be wary of describing Scalia as liberal on Fourth Amendment issues, and is not surprised that Scalia has been ruling this way in recent cases involving the protection of an individual's body and home.

"It's not uniform. He doesn't have a very expansive view of the Fourth Amendment across the board," Levitt said. But Scalia's reasoning is mostly consistent with the doctrine of originalism, though "it's exceedingly hard to tell how the framers would see the use of DNA."

Levitt added that for Scalia, "it's a question of, 'does it invade the privacy of the home, and would the framers have required a warrant.'"

In a way, it's not surprising that Scalia's "originalist" interpretation of the Constitution would make him concerned about the use of technological advances to invade citizens' privacy in new ways. These types of invasions, after all, were not around in the 18th century when the Fourth Amendment was ratified, and to Scalia that makes them unconstitutional.

Kerr, of George Washington Law, also theorized that the voting patterns of recent Fourth Amendment rulings could relate to how each justice likes to decide Fourth Amendment cases: Either by clear, hard rules (Scalia), or by the balancing of the government's interest in law enforcement against the suspect's civil liberties (Breyer):