"She is George Bush in a skirt!" a top Arizona Republican angrily declares. How it all went downhill so suddenly 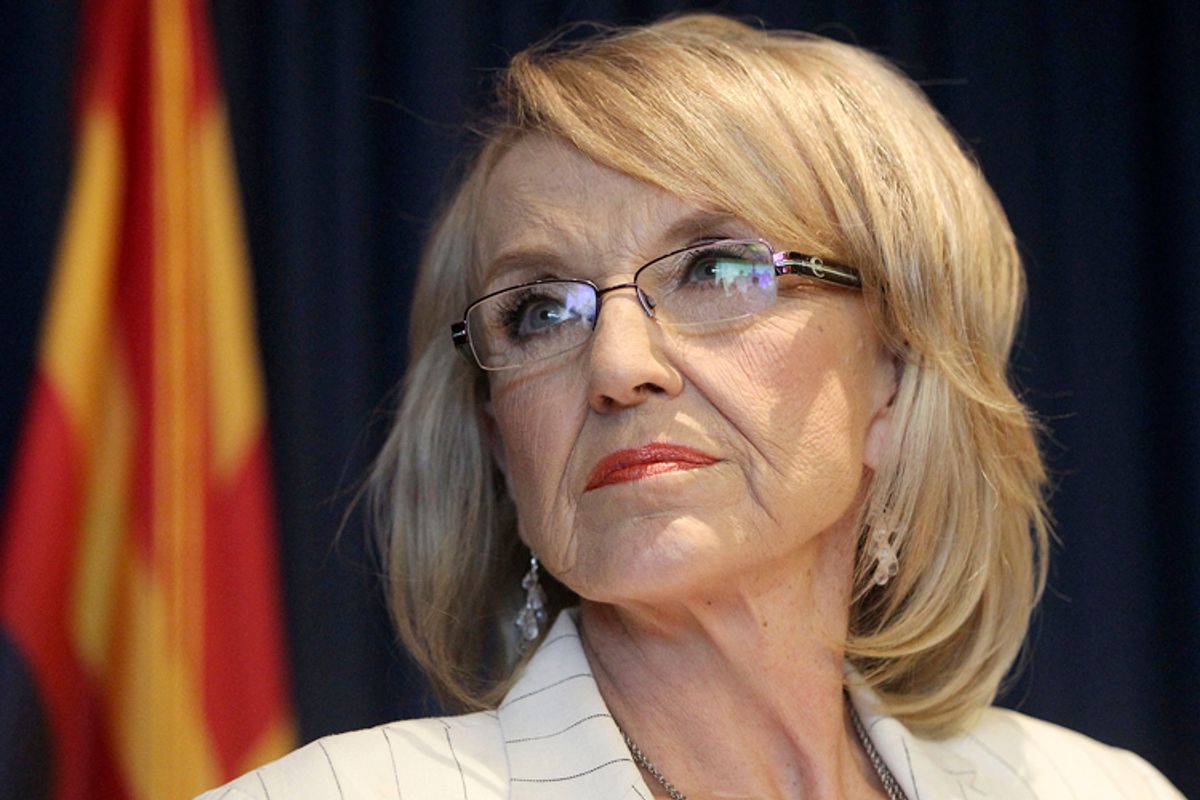 In Arizona this week, black is white, up is down, left is right and Gov. Jan Brewer is getting praised by gay Democrats and slammed by Tea Party conservatives.

The governor made a name for herself on Fox News and at national gatherings of conservatives like CPAC as a kind of uber-Tea Partyer, who eats scorpions for breakfast, wags her finger in the president's face at lunchtime, signs strict anti-immigration bills into law in the afternoon, and gives the Tea Party flag the same legal protections as the Star-Spangled Banner by bedtime.

But this conservative edifice has come crashing down since she announced in her State of the State address this year, to the shock of everyone, that Arizona would accept Obamacare and expand its Medicaid coverage whether her Republican allies in the state liked it or not. Needless to say, they did not like it. But Brewer's newfound love of Obamacare was so strong that she vowed to veto every single bill the Legislature sent to her office until they caved on Obamacare.

Soon, this one-time darling of the right was getting eviscerated in National Review editorials, yelled at -- to her face -- by conservative talk radio hosts, and being called "Judas" from the chambers of the state House of Representatives.

"This is what we get, because we let her get away with this and we never outed her from the beginning. The chickens have come home to roost," Frank Antenori, who battled Brewer for years when he was the Republican whip in the state Senate, told Salon. Antenori and another former state senator are now working on getting the 86,000 signatures they need to delay implementation of Obamacare and put the Medicaid expansion on the ballot for voters to decide on.

When we reached Antenori yesterday, his frustration was obvious about the national perception of Brewer as some kind of conservative hero, which he blamed on Fox News, launching into a 15-minute tirade about the "so-called Republican." "She's a big spending, big government, tax-raising Republican. She is George Bush in a skirt. She loves to spend money," he said.

While Brewer was carefully crafting a facade as a hardcore Tea Partyer for a national audience, conservatives in Arizona say she was quietly fighting the right flank of her own party on everything from the SB-1070 immigration law to budget issues. But with Obamacare, conservatives feel especially betrayed.

Conservative blogs in the state have started calling it "Obrewercare" and activists rally against the governor whenever she appears publicly. "The image of a strong, finger-waving-at-the-President leader gives way to a portrait of a puppet politician surrendering her state and turning her back on the wishes of her own people," one popular blogger wrote. Many of the county-level Republican Parties in the state have passed resolutions opposing the governor's move on healthcare.

"She's never been a conservative Republican," Maricopa County Republican Party Chairman A.J. LaFaro told Salon. "We're really disappointed here. I think she has caused irreparable harm to the Republican Party here in Arizona. There has always been a chasm in the party ... but she's made it worse."

One of the pieces of legislation Brewer vetoed in making good on her promise to stop anything until the Legislature caved was a "religious freedom" bill favored by the Christian right in the state.

"I’m an old friend, and I’ve campaigned with you, so this is not in anger, but in sorrow. I can’t believe you vetoed SB1178, which would have protected the free exercise of religion. What’s going on?" talk radio host Hugh Hewitt asked Brewer Tuesday night, exasperated. Brewer tried to explain herself, but Hewitt wasn't having it. "I’m just shocked," he said.