Yes, your credit card and phone companies have access to some personal data. But they have your permission 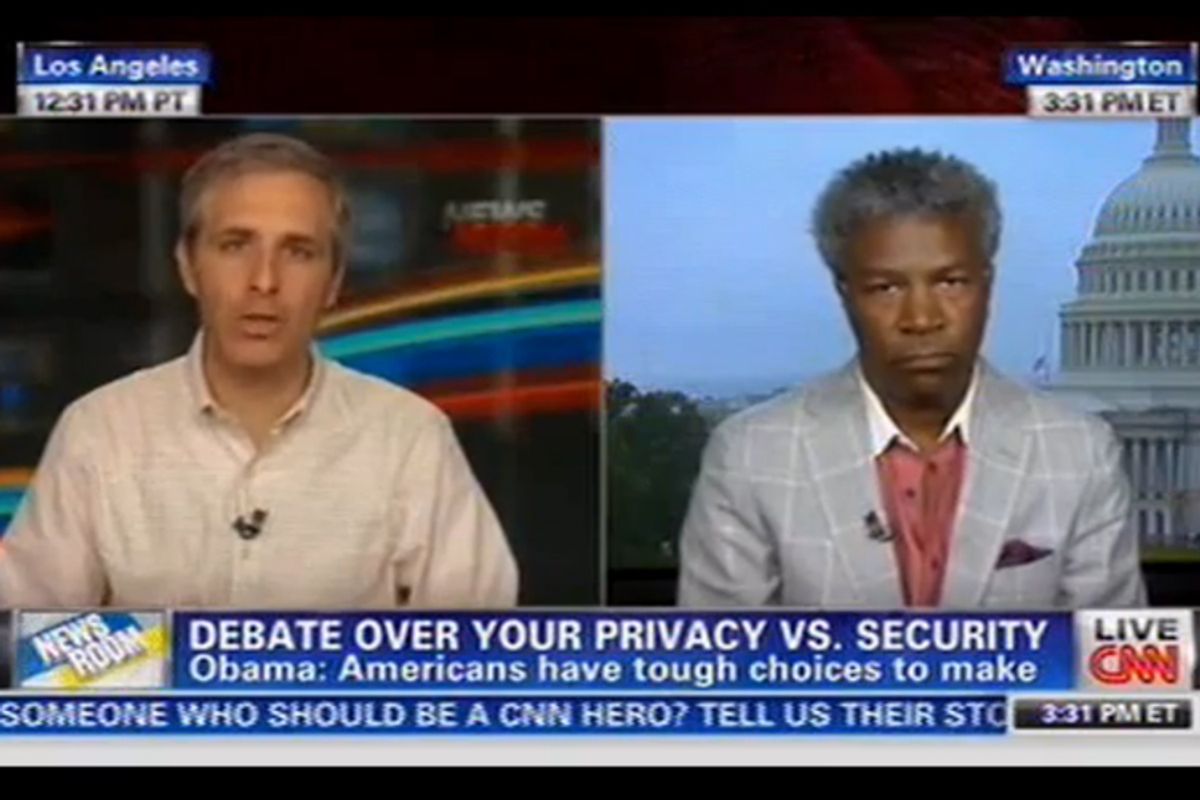 I appeared on CNN today to debate the Obama administration's NSA spying operation with the president's pollster, Cornell Belcher. His statements perfectly illustrated the White House's bait-and-switch rhetorical strategy -- one that tries to pretend the mass surveillance system is constrained in its scope and therefore no big deal.

To review the latest news: Earlier today, the president called the unprecedented program "modest" and insisted that "nobody is listening to your phone calls." Belcher -- who advises the White House on how to frame issues -- went even further, casting the program as nothing more invasive than, say, your bank logging your personal financial transactions or a pollster evaluating data. Watch it here:

Before evaluating the legal arguments being made by Obama, Belcher and other administration officials, let me just say for the record that the most grotesque part of this CNN exchange was when Belcher tried to justify the surveillance program on the grounds that it is popular. In a country whose constitution was designed, in part, to prevent majority public opinion from trampling the basic rights of minorities, this is a hideous line of reasoning, to say the least. Similarly hideous is Belcher claiming that mass surveillance is making us safer, but not being able to provide any evidence that such a claim is true.

All of that aside, what's significant here are the larger legal arguments, because they will likely be used in court cases to cement this and other surveillance programs for the long haul. And the fact is, the White House's legal arguments are deceptive -- and at times, outright lies.

First and foremost, let's remember that a former FBI counterterrorism agent recently told CNN that the administration is, indeed, listening into phone calls. If that's true, the president is outright lying (which should no longer be considered surprising, in light of his administration's blatant -- and potentially perjurious -- lies before Congress on this issue).

But let's say that despite this, you nonetheless believe President Obama when he says his administration isn't listening in on phone calls. The fact remains that, as the New Yorker and Reuters both show, the collection of "metadata" about calls is often just as intrusive as listening into the actual calls themselves. Reuters sums it up this way:

Any suggestion that Americans have nothing to worry about from this dragnet collection of communications metadata is wrong. Even without intercepting the content of communications, the government can use metadata to learn our most intimate secrets – anything from whether we have a drinking problem to whether we’re gay or straight... So we shouldn’t be comforted when government officials reassure us that they’re not listening to our communications – they’re merely harvesting and mining our metadata. In a digital world, metadata can be used to construct nuanced portraits of our social relationships and interactions.

That gets to how Belcher followed up his boss during our debate on CNN today. He argued not only that a program sweeping in data from millions of Americans is modest, but also that it is no different than companies analyzing consumer data. Like so many carefully sculpted political talking points, it sounds logical, except when you remember the key facts being omitted -- in this case, the fact that the government is using its law enforcement power to obtain the data without the public's permission. Yes, that's right: unlike a company with which you personally do business -- and with which you sign an agreement about your personal information -- the Obama administration is using the government's unilateral power to simply grab your information across multiple platforms.

That's hardly, as the dismissive phrase goes, a "distinction without a difference." As I noted on CNN, when it comes to civil liberties, the Bill of Rights is all about constraining the power of the government to encroach on our freedoms. It does this because the founders recognized that the government isn't just another institution in society -- it isn't, say, just a private bank or a polling firm. It is granted special powers (subpoena, warrants, etc.) that those other institutions don't have -- but it was granted those powers in exchange for that authority being properly constrained. When such constraints are removed, our liberties are inevitably restricted (this, by the way, is why Senator Obama sponsored legislation to outlaw what President Obama is now doing).

Belcher and other Obama officials likely know all this, but also know that the best way to at once defang the NSA scandal and normalize the government's assault on civil liberties is to pretend it's the same as any other company using data in the creepy ways we've all gotten accustomed to. It's the old "nothing to see here, move along" trick. The only question is: Will America fall for it?