Why the right is confounded by military sexual assault

They believe two contradictory myths: Rape is a logical result of hormones. And "All-American" boys don't commit it 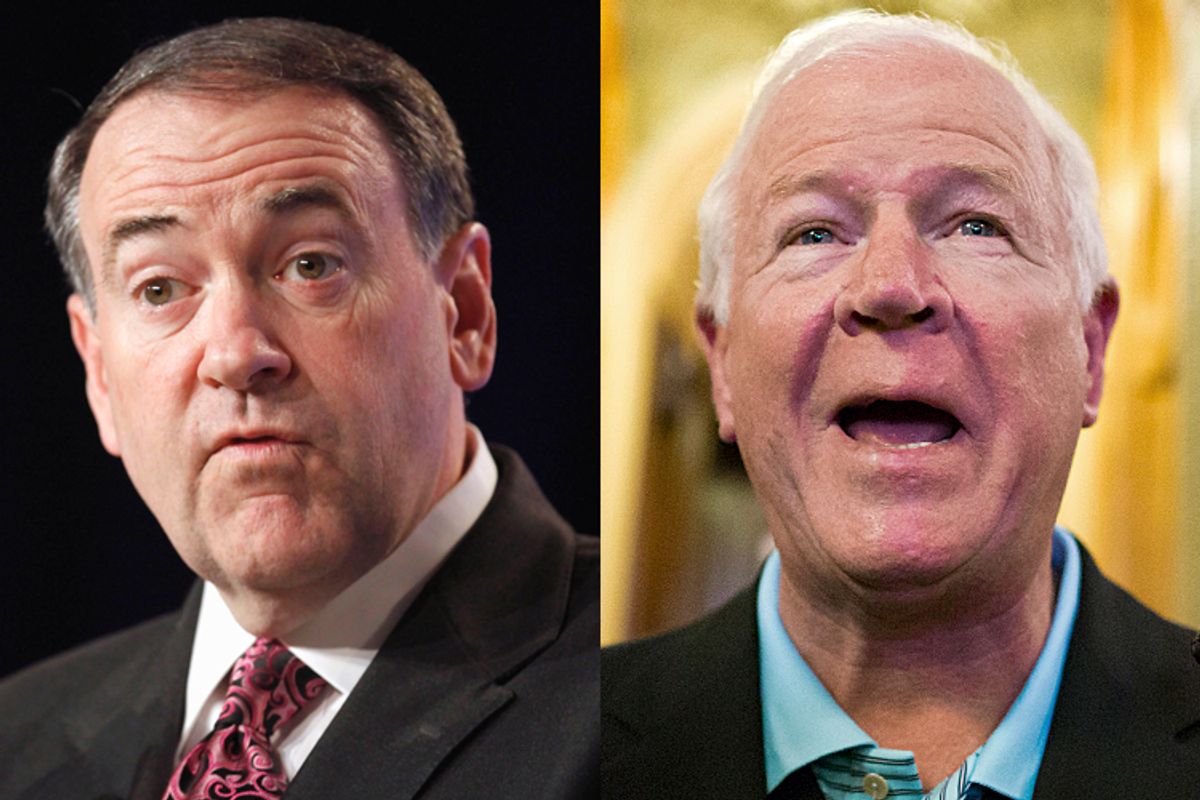 This week, some people took a look at the women on the Senate Armed Services Committee using their perch to shed a light on military sexual assault and felt inspired. Others -- notably conservatives, some of them still in Congress -- apparently saw a bunch of harpies trying to emasculate the military and deny the inborn nature of men.

Military sexual assault presents a terrible conundrum for an elected Republican. One has to agree that rape is bad, especially after what happened to Todd Akin and Richard Mourdock. One has to concede that we should work toward the safety of our service members. And mostly, Republicans in Congress managed this incredible feat, even while generally rejecting the remedy that advocates for service member survivors recommend, taking serious crimes out of the chain of command. But there were eruptions: Saxby Chambliss became instantly notorious (again) for blurting out, “Gee whiz, the hormone level created by nature sets in place the possibility for these types of things to occur.”

There are, in fact, two warring conservative views of rape: That it is only perpetrated by monsters, and not the decent boys of the armed forces, but at the same time that it’s a product of unbridled hormones that are unsurprising and ubiquitous. As Amanda Marcotte pointed out, this rather sells men short: “While most straight men experience strong feelings of sexual desire, very few of them rape women.”

The conservative commentariat, not nearly so restrained by someday actually being up for election, took the boys-will-be-boys mentality to the next level, blaming women in the military for simply existing alongside men. And they exhibited a growing sense that this was all a diversion from the real scandals perpetrated by Obama.

It was a good moment, it turned out, not to blame rapists but to blame liberals. On his radio show, Mike Huckabee asked Family Research Council's Jerry Boykin, “Do you think this has anything to do with the fact that we’ve so liberalized the policies of everything from women in combat, the whole concept of separation of the gender as well as saying, we’re not going to have any restrictions on homosexuals in the military, does that have anything to do with this?” Boykin replied, “I think it has everything to do with it, Governor. We have seen a sexualization of our military with this social engineering.” He added, “We are trying to violate the laws of nature.” Of rape in a time of combat, Boykin said, “It is nature. It is natural state of the human being to look for solace any way they can.” Whether women in the military are humans who deserve any justice following such assaults remains to be seen.

Meanwhile, Michael Savage had Allen West on his show, saying of the women on the Armed Services Committee, "When I watch these Khmer Rouge feminists try to take over the military, this looked like an attempted coup to me, Colonel West." He added, "When you say sexual assault, according to the new liberal interpretation of such a phrase, does that not include, 'Hey honey, let's go for a beer?'" Radio Host Andrea Tarantos conceded it was an important issue but blamed MSNBC for giving it too much airtime and President Obama for mentioning it at a Naval Academy commencement speech, among cadets "who didn’t assault anybody, that’s why they’re sitting their beautiful navy whites ... they have to be lectured on graduation day about sex crimes. Again. Why did they have to do that?" (Actually, given current statistics, it's reasonable to believe that there were plenty of both survivors and perpetrators of sexual assault in the audience that day.) Pat Dollard accused the mainstream media of using military sexual assault to change the subject from the IRS hearings. Mickey Kaus was probably the first to air that conspiracy theory, throwing in immigration for good measure: “I suppose it's too paranoid 2 think sudden spate of military sex scandals a way 2 crowd out WH scandals AND amnesty,” he tweeted on May 22.

It's fitting to pair all this with anti-immigrant sentiment, because Latinos and women (and Latina women in particular) remain groups Republicans have to woo for their survival, and yet everywhere you look, they're blowing up any hope of it and helping Democrats fill their coffers. (Then again, look where they're getting their advice -- Pollster Kellyanne Conway, who makes a living telling Republicans and corporations how to appeal to women, told Politico, “Rape is a four-letter word, so is debt to many women.”) This is not abortion, which remains a divided issue on which Republican base voters are activated. This isn't even the government paying for anything. It's just a public airing of what may be an epidemic of recently increased proportions but is nothing new, that has been hidden in plain sight for decades and allowed to continue with impunity. It involves keeping two ideas in your head at once -- that women and men can be at once strong and help defend the country, and vulnerable to dehumanizing assault, for which perpetrators should be held accountable. For some people, that's two too many ideas.