Can Brooklyn's sweetest landmark be saved? 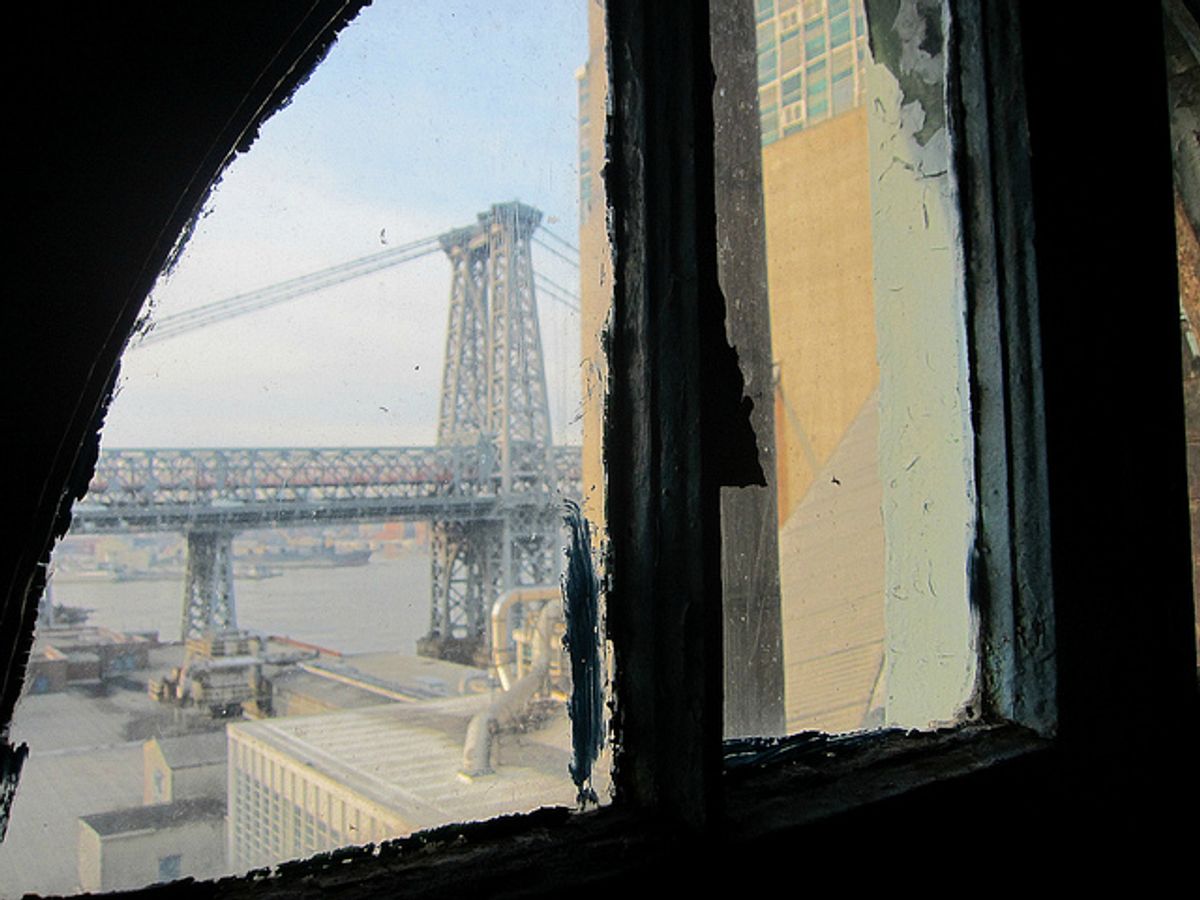 The massive Domino Sugar Factory that faces the East River with its iconic yellow sign is expected to soon be dwarfed by towering skyscrapers. However, there are some supporters who are rallying to get public support to turn the old factory into a cultural center.

Projection by the Illuminator on the Domino Sugar Factory (viaBrooklyn Paper)

As the Brooklyn Paper reported, late last month and through this week projections have appeared on the brick sides of the Domino Sugar buildings, with messages like “Buy Back Domino” and “Ka-Boom” (and also an “Occupy Istanbul” message, for good activist measure).

“The goal with something like this is mainly to raise awareness,” explained Grayson Earle with the Illuminator to Hyperallergic. “Basically no one in NYC knows what is happening with the Domino Sugar factory, and while maybe only one or two hundred people experienced the projections directly, a handful of local papers and online magazines wrote about it and turned people on to what is happening with the building. In previous actions I’ve also been happy to project because it really lifts the spirits of people around us. I know when we changed gears and blasted a message to Istanbul we received tons of tweets from people over there that were happy to know folks in NYC were thinking about them. We sometimes think of it as producing a spectacle, or a counter-spectacle, around a situation.”

There’s also another group that projected “Save Domino” in red light near the factory this week. The “buy back” refers to buying it back from developers Two Trees Management that is transforming the site over the next 15 years. The art interventions were organized by representatives of Williamsburg Independent People with the Illuminator (whose activist projection work was featured last September on Hyperallergic, and was seen recently on the occupied Cooper Union). WIP is the same organization that proposed transforming the sugar factory into a Tate Modern-like museum back when the plans for the abandoned building were less set in stone (or, more accurately, glass and steel).

View to the Williamsburg Bridge from the Domino Sugar Factory

While the plans from SHoP Architects that were revealed earlier this year for the Domino Sugar Factory 11-acre site are startlingly giant, with their block-shaped, cut-out skyscrapers having room for offices, residences, and retail, there’s no space like this for culture, and that’s being seen as a missed opportunity. North Brooklyn, despite its strong art scene, still doesn’t have the anchor of a central institution to showcase its art and bring in the art of others in a museum setting. There is a group aiming to create a Brooklyn Museum of Science and Art in Greenpoint by 2019, yet the Domino Sugar Factory plan would have offered a venue for community interaction in a neighborhood that has little in the way of meeting centers for the diverse groups who live there.

However, as Jeremy Soffin, a Two Trees spokesman, explained to Hyperallergic, the new complex will offer many resources that Williamsburg is currently lacking, such as large spaces for start ups and other businesses, waterfront access where there has long been none, and a major affordable housing components. All of the retail added will also be local, with no chains, with the commercial development similar to what they’ve done in DUMBO. The office components are especially essential in hopefully keeping more people who live in Williamsburg working in Williamsburg. ”There will be more jobs here then the height of the factory 50 years ago,” he said, and that “right now, creative people who live here often go to another neighborhood, and this can be a magnet to keep people in the community.”

Inside the Domino Sugar Factory

One of the top floors of the Domino Sugar Factory

The old brick Domino Sugar Factory is especially a place that has a deep history with the neighborhood. Since it started operating in 1884, it employed thousands as the world’s one-time largest sugar factory. When it closed in 2004, it left behind a void in activity in the neighborhood (as well as a asbestos problem that will have to be abated before anything can happen with the old brick building, although according to some reports, not with the highest ranked of firms). The landmarked building will be part of the complex, likely as loft space, but it won’t likely be the stand out building (that focus goes to the O-shaped building that seems to be offering a conciliatory window to the neighborhood it’s walling in).

While exploring the Domino Sugar Factory with Wanderlust, I was struck with the building’s surprising industrial beauty with its Gothic curved windows and sprawling spaces. I also was struck with how much of a mess it was, with sugar turned to molasses all over the floor and huge machines left to decay, even food left in the refrigerators. Some of these machines will actually be cleaned and be part of a “linear museum” out in the new Sugar Factory park. Despite its condition, though, I was really impressed by the legacy of industry that was visible in the place, and although even as a museum it would have to be radically renovated, there’s some need to express this story of the community through the site. Or at least encourage some expression of the neighborhood’s current culture within its new modern complex.