I'm Kristin Beck now. As Chris, I risked my life on countless SEAL missions -- all while trying to hide who I am 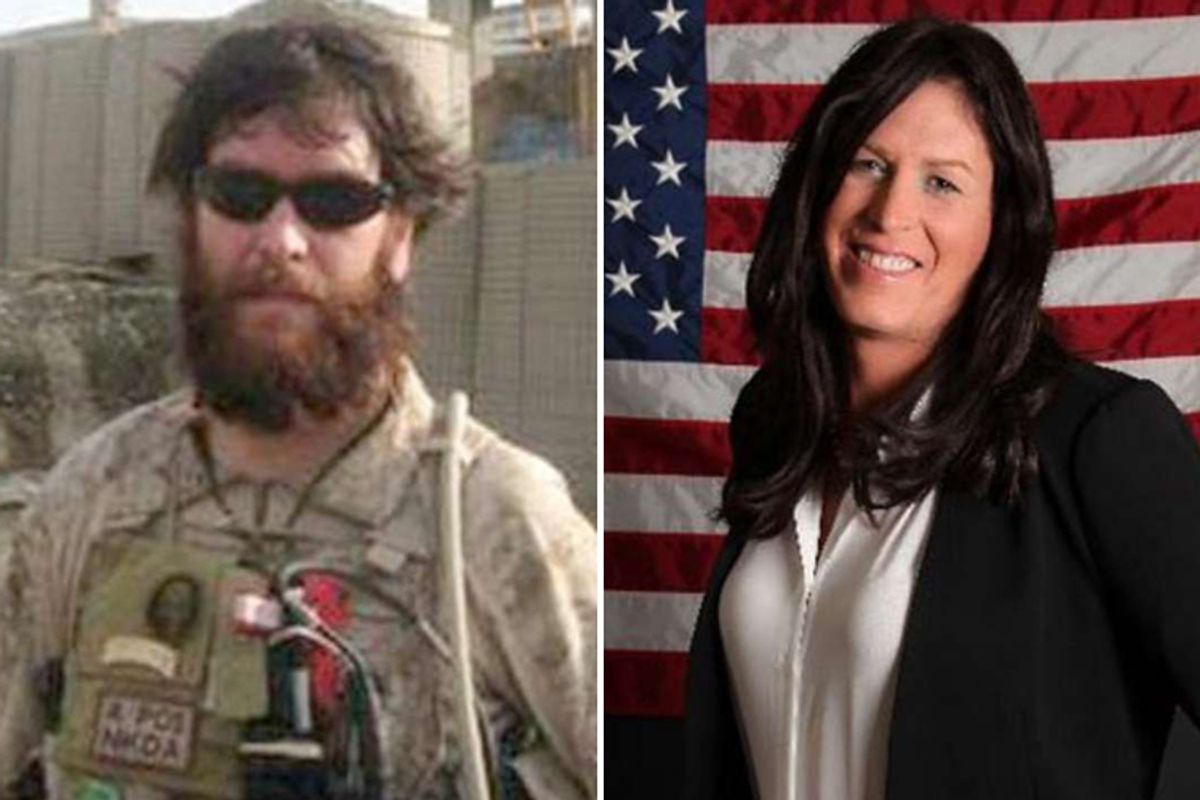 Excerpted from "Warrior Princess: A U.S. Navy SEAL's Journey to Coming Out Transgender"

In 2006, Chris and his wife Shelly picked up right where they left off. Fed up, Shelly took the kids and moved to live near her parents in Minnesota.

As they left in the Volvo, Chris sat in his Chevy truck and drove beside them for a few miles. Max waved out the window with a smile on his face. Henry was in his car seat, waving both hands and laughing. Crying, Chris almost crashed after he lost sight of them and the car. They were headed off to a new life—a life without their father. Chris was devastated at the failure, confused and ready to give up.

He was alone now and had to try to build some semblance of a life. The only consolation he had now was to dive into his feminine side. Try to ease his soul and come to some kind of peace.

For years Chris had turned off his sexuality like a light switch and lived as a warrior, consumed with the battle—living a basically asexual life. For Chris the other SEALs were brothers and in the man’s man warrior lifestyle, even if he had wanted to entertain sexual thoughts, there really was never any time to be thinking too much about sexuality. Blood, constant deployments, hard driving, fatigue and traumatic bereavement can all help shut down a sex drive. And until he resolved his body issues and got a girl body it would be too strange for him to engage in homosexual behavior that he didn’t relate to.

Psychologically Chris felt like a girl somewhere between eleven to sixteen. But since he had never allowed himself to express his female gender identity and because he was caught in a male body, Chris as a female still needed to go through adolescence—to learn how to be a girl and express her sexuality.

That required dressing up and even moving into a female body. Now, with Shelly gone, Chris tentatively explored that developmental stage. He sometimes went to the bars alone at night, dressed ambiguously—playing with an expression of his female self much like a teenage girl would—but most often he sat in the bars drinking and just feeling lost.

Chris also went to a few gay bars; they were filled with very nice people, open and caring. For the most part they understood what it was like to be different—what it was like to be hated and have prejudice thrown at them. Chris saw himself growing close to the guys and the women who made up that scene. He was friends with all of them and none of them. And he played with the idea of going home with a guy, but it was too scary and also didn’t fit his sense of self as a “straight girl."

Indeed at this point in his career Chris had become so detached from fear—and also sometimes so willing to risk his own life to end the problems of having to face his gender identity issues—that he was often the one that would go roaring into the mountain caves shouting “Come out motherfucker!” to the Taliban who might be hiding in there. Not many of the guys would do that, but Chris had learned to push his fear down deep while in the combat mode and he was also willing to risk his all in battle.

Overt homosexuality was not tolerated in the military at the time—they were still running under a Don’t Ask/Don’t Tell policy—and Chris felt trepidation about crossing any borders—and he also didn’t feel he was gay. But he also didn’t feel he was a man, so he didn’t really know how to negotiate a sexual relationship whilst in a man’s body. He was lost—with no maps, no compass and no guides.

On one of his two-day leaves Chris went to Minnesota to visit his sons. Hoping to hang out, he waited for them to get home from school, but things didn’t go as he hoped. His sons arrived home with friends in tow.

“You want to hang out now?” Chris had asked Max, his eldest.

“Dad, my friends are here!” Max had answered, embarrassment creeping into his voice.

“I’m only here for two days!” Chris said, taking Max off to the side and speaking in hushed tones.

“Friends are important!” Max argued, and perhaps deciding to let his early childhood hurt out he added,

“Dad, we learned this from you: friends are important—family doesn’t matter.”

Chris walked out to his car—tears blinding his eyes—and drove off on a sudden “errand”, thinking, I messed them up so bad! I am worthless to them now, how can I go back and fix this? If ever?

Later, when he had returned to the house, Shelly pointed out to him, “You showed up for two days and then you disappear again! What do you expect from them?”

It was true—he had no right to expect anything.

By the time he had carried out thirteen deployments, a couple hundred missions executing advanced tradecraft captures and served as the ground force commandeer in Afghanistan for all the missions he went on, Chris had seen a lot of death: death of the guys they took down, death of innocents, unfortunates that sometimes ran in the way of fire or were in a building that got hit, and death of his comrades. While many people have full-blown flashbacks of combat, Chris never allowed that into his mind: he was a master of detachment. He had trained himself too well to allow his PTSD to take over. Instead, he would see snapshots of fallen friends and scenes. It was like still photos that appeared in his mind, one after the other. Chris tried to keep his feelings at bay, but it was upsetting and painful to vividly remember his fallen buddies. It was the worst at night. The live action would return in dreams and it would always be of those times when his buddies fell. And the question would always be the same, Why did he die? Why him? He had a life. Why not me? But like all SEALs Chris always pushed his PTSD down—never letting it get in his way or slow him down in accomplishing their missions. SEALs rarely admit pain, hardly if ever admit vulnerability—they are highly trained to just keep going and keep fighting, knowing and living by the credo that failure is not an option.

Chris was trained for night raids and vampire hours and as a result rarely slept well. He always woke around hit time—between 2 and 3 a.m.—and relived some aspect of what he’d been through. Likewise the pain from the many training and combat injuries he had sustained also often made sleep difficult to find. One night when he couldn’t get to sleep, Chris had too much to drink and he was feeling alone and sad. Failure filled his mind and guilt over being alive when the others weren’t.

Will I ever be able to be me? he asked himself as he pulled out some hard liquor and began to booze up. His pistol was on the shelf near the television and his eyes kept being drawn to it. Take it and just get it done with now! You don’t deserve to be alive, a part of his mind said.

Another part watched the television. It was a show about kids in New Jersey getting drunk and being stupid. Chris flipped the channel and saw a show about the life of Michael Jackson with millions of fans around him screaming. There’s a real hero! Chris thought sarcastically. Then he changed the channel to basketball—more fans screaming, and then to football—more fans. Next he flipped to the “news”—it was showing Britney Spears and her latest drug relapse and her struggles with her two children. He changed the channel to some review of the Grammys with the “stars” going up on stage as they cried and told the audience how hard it was to get there and how wonderful life was. The “hero” on stage threw in some insult about the president and the war and how messed up America was, how we should be more like the French or more like Venezuela or some crap.

“What the fuck?” Chris asked himself and picked up his pistol. It was cold and he fiddled with the weapon, doing a press check, then laid the pistol back down on the table.

There’s still so much out there to do, Chris thought, shutting off the TV and putting the gun down. The easy way out is not the right way, especially when I still have my buddies over there in the sandbox—defending the rights of the heroes of the idiot box and our modern-day coliseums.

Excerpted from "Warrior Princess: A U.S. Navy SEAL's Journey to Coming Out Transgender" by Kristin Beck and Anne Speckhard. Published by Advances Press. Copyright 2013 Advances Press. Reprinted with permission of the publisher. All rights reserved.