Another kid with an AR-15

The shooting last week in Santa Monica is all too familiar, and yet Washington has given up on gun control 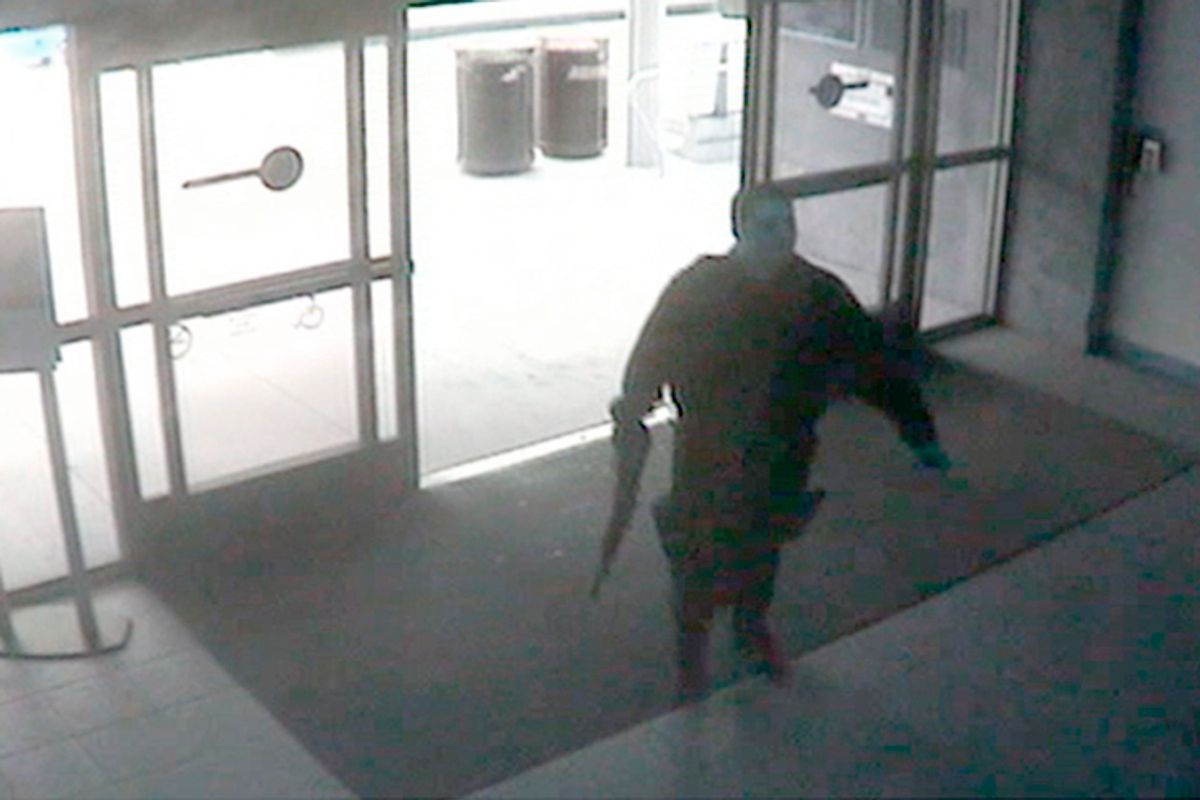 The scene described by eyewitnesses and authorities is one out of a video game: Suspected shooter John Zawahri turned the beachfront Southern California community of Santa Monica into a battle zone for 15 minutes Friday afternoon, cutting a bloody swath through a mile of the city as he shoot at cars and passersby with abandon after killing two family members and burning down their house. NBC News:

As firefighters first arrived at the scene to extinguish the blaze, the gunman carjacked a vehicle being driven by an adult woman and threatened to murder her if she didn’t drive him to the nearby college campus, Santa Monica Police Chief Jacqueline Seabrooks said Saturday.

The gunman demanded the woman stop at various points along the mile-long ride so he could fire indiscriminately at passing cars, police said. He shot at a woman driving past the scene of the carjacking, wounding her, and later sprayed bullets at a public bus, shattering glass and injuring three people.

As they approached the SMC campus, the shooter fired at Carlos Navarro Franco while he sat behind the wheel of his SUV, which spun out of control and careened into a wall...[he] died instantly.

And yet, the scene is all too quotidian and real. It follows a familiar script: A young man -- Zawahri's 24th birthday would have been on Saturday -- who suffered from emotional and psychological problems -- he was previously hospitalized for mental illness -- wielding an AR-15 rifle -- the same gun used at Sandy Hook and Aurora and Oregon and countless other shootings -- to kill innocent people who happened to be in the wrong place at the wrong time. In this case, five dead, including the gunman, and at least four others injured.

The parallels with alleged Newtown shooter Adam Lanza go even deeper. Zawahri's parents were divorced and he lived with his mother, whom neighbors desired as a "lovely woman...with a crazy kid." "John had a fascination with guns," a friend told the Los Angeles Times. "We were all worried about it." And, like Lanza, he shot his parent before launching his rampage.

Maybe it's because the shooting was overshadowed by blockbuster revelations about government spying, or maybe we've finally exhausted our ability to care about these tragedies after so many, but the shooting hasn't earned anywhere near the attention of other mass sprees. Or maybe it's just too difficult to dwell on -- and no political leaders have an interest in drawing attention to it -- since Washington has all but abandoned any attempt to reform gun safety laws.

And this case should show just how badly those laws need reform. Zawahri should have been stopped at least twice over from accumulating his stockpile, thanks to both his mental health problems and California laws that generally prohibit the purchase of assault weapons. Critics will undoubtably say the fact that he wasn't stopped shows the opposite -- strict gun laws don't stop shootings -- but both prohibitions are fraught with glaring loopholes, as this incident and too many others have shown. Guns can be lightly modified to flout legal definitions of assault weapons, or purchased online, or bought through private sales in other states to skirt all regulations. They can even be assembled from parts kits purchased online with zero government oversight, as Bryan Schatz did just a few miles from Santa Monica for a Mother Jones story.

But more importantly, background checks are supposed to stop people with mental illness from purchasing weapons, but problems with coordination between states and the FBI have meant that this often doesn't happen. And it's too easy to avoid a background check all together. These are exactly the kinds of loopholes that reforms want to close.

Others will say that armed bystanders could have stopped the shooting, but this argument fails basic tests of logic, history, and science. Armed civillians rarely, if ever, stop gunmen, and occasionally injure other victims in the melee by accident. And if guns laws are worthless because some people won't follow them, as the NRA and its comrades like to say, then by that logic all laws, from speed limits to prohibitions on rape, should be thrown out because people keep finding ways to break those too.

Maybe guns don't kill people, as the bumper sticker says, but tell me that Zawahri would have killed as many people with a knife instead of a semi-automatic assault rifle. And if it can happen in restorty Santa Monica, a community best known for being the backdrop for hundreds of movies and the subject of several hit songs (and, disclosure: this hometown of this writer), or white collar Newtown, Connecticut, it can happen anywhere.

We'll probably never be able to stop all gun crimes, but throwing up our hands and doing nothing to at east try isn't the answer.