An epic showdown, inspired by the Internet's core values: "Information wants to be free" challenges the NSA 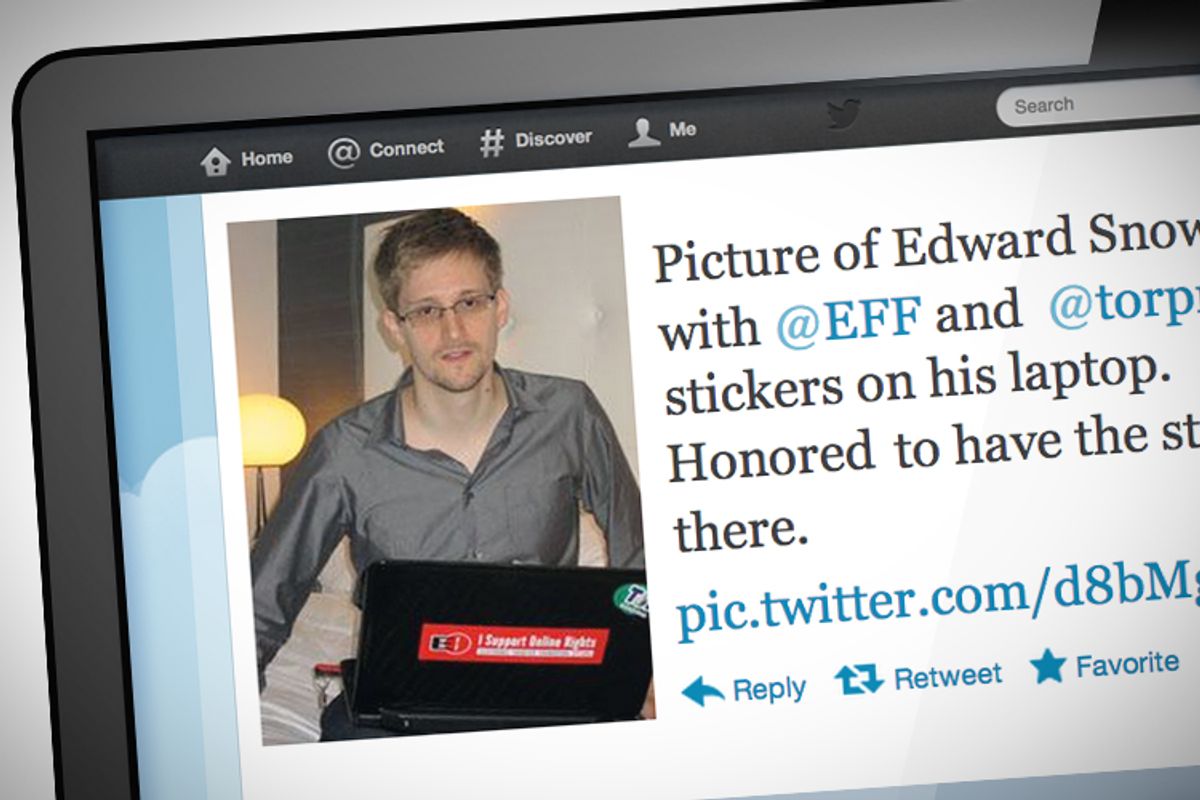 One of the more amazing documents to emerge from the NSA leak drama isn't classified. It's a photograph of Edward Snowden, sitting on a bed, with his laptop across his knees. The laptop has two stickers on its back, one from the Electronic Frontier Foundation ("I Support Online Rights") and one from the Tor Project, the nonprofit volunteer-run group that produces online privacy tools designed to protect individuals from digital surveillance.

Talk about your massive security clearance failures! If I were an NSA contractor, I might be predisposed to look askance at giving top-secret access to a libertarian-leaning employee who personally endorses anti-tracking tools and advocacy organizations that see surveillance -- by anyone, government or the private sector -- as a threat to civil liberties. Snowden might as well have had the words "information wants to be free" tattooed to his forehead.

But then again, if libertarian-leaning EFF supporters were discriminated against by government intelligence contractors, those contractors might encounter serious obstacles in fully staffing their IT departments. The tech company system administrator who distrusts government is an outright cliché. The Internet is chock-full of them -- indeed, geeks with well-thumbed copies of "Atlas Shrugged" played a not-insignificant role in building the Internet.

And that's something that has always put the libertarian geek in an uncomfortable position, straddling a nearly impossible-to-resolve paradox. Whatever we mean by "the Internet" has historically been invested with a plenitude of libertopian dreams. The Internet treats censorship as damage, and routes around it. Access to information through the Internet will topple authoritarian governments! The Internet will enable the creation of monetary systems free from the control of Treasury departments and Wall Street banks! In an interview with the Guardian, Snowden called the Internet "the most important invention in all of human history.”

And yet at the same time, the Internet has turned out to be the greatest tool for totalitarian surveillance ever imagined, much less invented. No government in history has ever had as much access to detailed information about all of its citizens as the governments that exist right now. Ironies abound: The Wall Street Journal reported on Sunday that the NSA would never have been able to make sense of the massive amounts of data it was collecting without the maturation of open-source software tools like Hadoop. These are tools that programmers collectively created, and shared, to deal with the operational problems of handling Big Data. I doubt any of the original coders expected that their hacks would become essential weapons for the spymasters. Who could have predicted that the logical consequence of "information wants to be free" was Big Brother?

Nobody understands the contradiction at the heart of the Internet better than the sysadmin -- the all-important geek who keeps the network running, and by the definition of his job has access to every piece of information that travels through that network -- every email, every chat message, every Web page accessed from every computer. It's a position that matches great power with the need for great discretion -- a major psychological challenge. The need to resolve that paradox might be one reason why so many of the sysadmins that I have had the pleasure to get to know over the years have been some of the most scrupulous people I've ever met on privacy issues. The fact that you can see that flirtatious email thread between two co-workers is all the more reason why you shouldn't.

“When you’re in positions of privileged access, like a systems administrator for the intelligence community agencies," Snowden said in a video published by The Guardian, "you’re exposed to a lot more information on a broader scale than the average employee. Because of that you see things that may be disturbing. Over the course of a normal person’s career, you’d only see one or two instances, but when you see everything, you see them on a more frequent basis.”

So what might be the most amazing aspect to Edward Snowden's story is the question of why we haven't had more Snowdens. The overwhelming force that the U.S. government is prepared to unleash against whistle-blowers is obviously one big reason, but it's still a little bit peculiar. The number of sysadmins necessary to keep the information economy running smoothly is truly legion. There is no way that the spooks or big corporations can avoid the necessity of having employees who have access to everything that is on the network. Someone has to have the keys.

Glenn Greenwald is claiming that Snowden's example has inspired others to come forward, and more links are to come. It is tempting to wonder whether this first leak is a trickle that will build into a flood. Because when it comes right down to it, the only people with the tools to truly understand how our reliance on networked computers threatens our freedom are the people who actually run the networks. Libertarians get mocked all the time for subscribing to an ideology that most people believe can never be workably deployed in messy real-time life, but that doesn't mean that a strong dose of libertarianism among the sysadmins who keep the machines working isn't a very healthy thing for society at large.