Expert: Whistle-blowers "tend to be conservative"

"They're not as cynical as the rest of us," says a political philosopher who's studied people who speak out 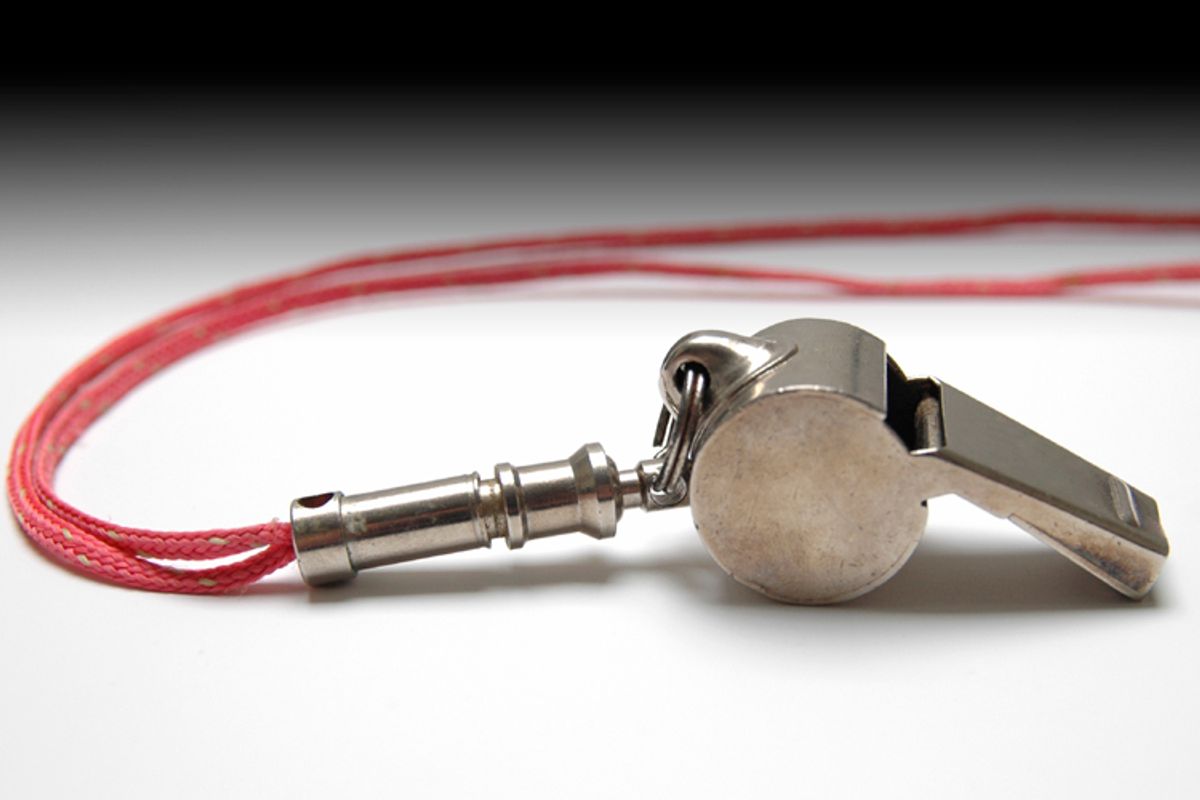 Whistle-blowers like National Security Agency surveillance leaker Edward Snowden may seem like rebels, rising up against the system. But according to experts who work with them, the average whistle-blower is actually deeply loyal, and not rebellious at all.

C. Fred Alford, a professor of political philosophy and author of the book "Whistleblowers: Broken Lives and Organizational Power," told Salon that most of the whistle-blowers he talked to had intense allegiance to the organizations they worked for: "One of them said, 'I wasn't against the system, I was the system.'"

Nor, despite news that Snowden may have donated to Ron Paul, are they more likely to be libertarian. "My experience is that whistle-blowers are not politically radical people," said Alford. "They tend to be conservative in the sense that they expect people to do the right thing. They expect the game to be played the way it's supposed to be played." And when it isn't, "they're genuinely shocked." Added Alford, "they're not as cynical as the rest of us."

Tom Devine, legal director of the Government Accountability Project and coauthor of "The Corporate Whistleblower's Survival Guide," concurred: "Most whistle-blowers deeply believe in their organization and are speaking out to defend it against mistakes which could backfire." A few might be "type A personalities" spoiling for a fight, he told Salon, but "most whistle-blowers are trying to honor their professional responsibilities." He added, "the ideological breadth of whistle-blowers is virtually unlimited. We have the most conservative clients at GAP as well as those who are more radical activists."

Snowden differs from the average whistle-blower, according to Alford, in his level of planning and awareness. Most who speak out against their organizations don't understand what the fallout will be, Alford said, but "Snowden seemed to have a very good understanding of what he was doing, what the consequences would be, and what he needs to do to protect himself." In the specificity of his leak, Alford said Snowden reminded him of Pentagon Papers leaker Daniel Ellsberg: Like Ellsberg, Snowden "knew exactly what he was leaking and leaked it selectively."

In one way, though, Snowden may have been less cautious than the average whistle-blower. Said Devine, "most whistle-blowers who leave their legal rights behind try to stay anonymous. Mr. Snowden's courage is rare and unique."

Both Devine and Alford said gender had little effect on whether someone decided to blow the whistle, except insofar as it affected what kind of information a person had access to -- Devine noted that as women increasingly held positions of responsibility in corporations and government, they were becoming whistle-blowers more frequently. Alford added that female whistle-blowers sometimes described their motivations differently than male ones: "They'll talk about the discrepancy they feel between the care they're expected to display at home for their family versus the utter carelessness they're asked to display on the job for other people, whereas men seem more eaten up by the question of disloyalty to the team."

Alford said we might be seeing more whistle-blowing coming from younger, rank-and-file employees in years to come: "As you get more and more emphasis on data sharing, [...] you get more and more relatively low-level people having access to really high-level secrets." But most whistle-blowers don't have access to the kind of state secrets Snowden leaked -- the most common type of whistle-blowing case, according to Alford, involves Medicare fraud. Lower-profile whistle-blowers typically suffer consequences we never hear about: "Down in the trenches the average whistle-blower still gets fired, gets divorced, loses his home, doesn't know what happened to him. The company is successful in separating the act of firing a whistle-blower from retaliation. It just goes on."

And ultimately, Alford argued, we shouldn't care what kind of a person a whistle-blower is. Ellsberg, he said, was "not necessarily the most saintly human being, but who cares? [...] All of Ellsberg's more mature and well-balanced colleagues with stable marriages and everything else, they knew the same thing and didn't do anything. Because they wanted to fit in."