Pete steals the show, a character is craftily outed, and finally -- finally! -- we feel a little sympathy for Don 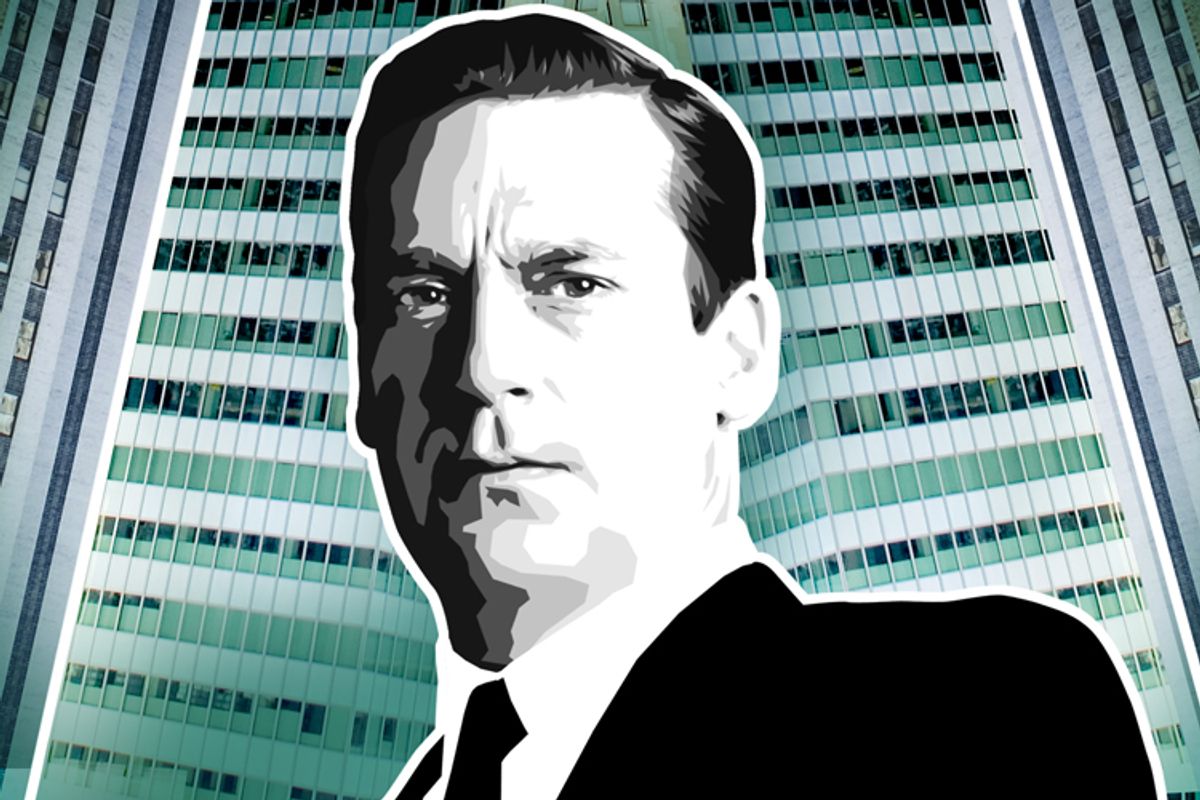 Every time this season of "Mad Men" starts to feel like a disappointment, we get another fantastic episode that reminds us why this show is incomparably smart and engrossing. "Favors" offered up one satisfying scene after another – which is particularly impressive because the episode mostly concerned imaginary relationships: Between Pete's mom and Manolo, Sally and Mitchell, Ted and Peggy, Ted and Don, Don and Arnold, Sylvia and Don, Bob Benson and Pete (Whoa! Who saw that coming? Not me!).

The favors (literal and figurative) were flying, of course, with too many satisfying scenes to count: Three-way flirting between Peggy, Pete and Ted? Mrs. Campbell telling Peggy about her sex life? Don actually sticking his neck out for someone other than himself? Of course, whenever Don starts looking heroic, you know there's real trouble ahead. Still, any episode in which Peggy, Pete, Ted and Don all show us their vulnerable sides is a rare and beautiful thing indeed.

I love the look on Peggy's face when Pete's mom tells her, "I'm glad you both swallowed your pride. If nothing else, for the good of the child you have together." Once Peggy realizes that Mrs. Campbell doesn't know about her and Pete's baby, and actually believes that she's Trudy, things only get crazier. Could Manolo the suave nurse possibly be sleeping with Pete's mother? Either way, it's remarkable that Weiner and Co. could take a tired comedic TV character trope – The Zany Old Person With Dementia – and transform it into something fresh and delightful.

So why does the idea of his mother having a little fun bother Pete so much? It's bad enough that he would try to shut it down; it's even more awful that he calls Manolo a pervert just for going near his mother. This prudish attitude about his mom points directly to the trouble in his marriage with Trudy, of course: The second she became a mother, she was desexualized for him, and he started treating her like a hostile stranger. (Of course, we can see pretty clearly why he's so conflicted about his mom in the next scene.)

Pete is deathly accurate about so much of what's going on around him (naturally he would be the first to notice that Ted and Peggy are in love), but his closed-mindedness clouds his vision about anything that's too close to home. He may be the most disgusted and the most outspoken when he feels some injustice is in the mix (he had the strongest reaction to JFK and MLK assassinations), but he's also unexpectedly rigid and old-fashioned. And he's such a bratty little baby to boot! In his first scene, drunk with Peggy and Ted, we get flexible, lovable, honest Pete. He generously tells Peggy that Ted is in love with her, and then, instead of giving her a hard time or acting jealous about it, he very vulnerably asks her if she pities him. What an incredible scene! There were so many great shifts in the mood, and so many mixed emotions in play. Every single beat of that interaction between Peggy and Pete was mesmerizing.

It was also pretty slick to move from Pete's vulnerability to his indignant scoldiness about Manolo back to more vulnerability when his mother finally snaps at him, and we get a clear view of just why he's such a mess. "You were a sour little boy. And you're a sour little man," Pete's mom tells him. "How could I expect you to be understanding? You've always been unlovable." Classic dysfunctional one-upmanship. "You're going to be a jerk to me, huh? Well, then it's time to drag out the withholding, punitive Bad Mommy of your recurring nightmares!" The look on Pete's face when his mom calls him unlovable is so heartbreaking. With those words, she effectively erases the small moment of joy Pete got when Peggy said yes, she knew him, but she really didn't hate him. Poor Pete.

I guess Bob Benson finally wants someone to truly know him, too. That must've been an incredibly difficult scene to get right, but the writers nailed it, making us suddenly see past Benson's fake exterior to his kind heart in just a few short lines. He could be talking about Manolo, or himself, or Sylvia, when he tells Pete, "Couldn't it be that, if someone took care of you, really good care of you, if this person did anything for you, if your well-being was his only thought, is it possible that you might begin to feel something for him?" It's so sad to see Bob looking sincere for the first time ever, but knowing that he's doomed. "If it's true love, does it matter who it is?" Pete doesn't understand true love, though. He only cares about who it is. Goodbye Sal, hello handsome, tragic Bob. We can almost hear rigid, defensive Pete before he even opens his mouth. "Tell him it's disgusting," he practically spits.

Pete's first three scenes, with their alternating softness and rage, exemplify what it takes to identify with and care about a character. And let's face it, Pete may be one of the richest and most complex characters on TV. Lesser TV writers would never dare to make one character capable of so many different, unpredictable reactions and emotions, ranging wildly between sharp, sensible and affectionate, and closed, attacking and selfish. Strangely enough, though, Pete's inconstant moods and attitudes make him more like a real person, rather than less. It's a testament to the show's writers that we still encounter him as real. And of course, Vincent Kartheiser is undeniably brilliant in this role; he obviously understands who Pete is well enough to make him feel authentic to us.

And just when Don was starting to look completely unsympathetic, he sticks his neck out for the Rosens (more specifically, for Arnold Rosen, and maybe for that doomed soldier he met in Hawaii, and maybe also for his younger self), even though it could mess up the firm's relationship with Chevy. Ted and the other partners look painfully aware of what Don is risking when he mentions his friend's kid, but Don presses on anyway. He even disagrees with Arnold and tells him that the war is wrong. It's obvious that Don doesn't care that much about work these days. He makes excuses to Roger about the research Sunkist will require; he even says "That's not my fault!" to the other partners – which isn't something the old Don would've dreamed of doing. His heart isn't in his career, and he's second-guessing his abilities at every turn. But at least there's room for us to feel a little bit bad for the guy.

More than a little bit bad, as it turns out. After several redemptive scenes – Ted makes it clear that he's obsessed with Don (and Don is genuinely puzzled), Don is treated as an unselfish savior by Sylvia, who assumes it's all about her (Oh, Sylvia), and Sally seems happy and wrapped up in her own dreams for once – Don just can't help but make another giant mistake. He can't resist being treated like a hero. It's the central motivator and central lie of his life. (Ted is arguably the hero there – if you can call pulling strings to save a rich kid from death while poor kids die around the clock "heroic," which obviously we're meant to question every step of the way.)

If Don had simply resisted the pull of a teary-eyed, grateful lover, if he had gotten off the phone and resolved to be a real hero and not a fake one for once in his life, then … Well, then this wouldn't be "Mad Men," would it? Instead, Sally catches Don and Sylvia in the act, and Don comes face to face, once again, with the familiar horror of being treated like the hero when he's really the villain. Mitchell thanks him, Arnold says "I owe you!" and Megan pronounces him "the sweetest man." What's remarkable about this scene is that we feel Don's pain for maybe the first time all season. This is true not only because Don tried to do something honorable for once by helping Mitchell (despite his initial impulse to stay out of it, as he advised Megan to do), but also because the image of Don in the elevator with his shirt out, almost crying, made it possible to feel real sympathy for him from that point forward.

We even feel sorry for him when he has a chance to be honest with Sally, but he just isn't capable of it. Remember how Sally told Betty, "You hate that Daddy supports my dreams! He doesn't think I'm just a pain in the ass"? That makes it all the more sad that Don treats her like a naive kid when he lies and says that he was "comforting Mrs. Rosen" (an echo of Manolo "comforting" Mrs. Campbell). "I know you think you saw something," he says, encouraging her not to trust her own eyes. His final summary -- "It's complicated" -- is supposed to stand in for a real explanation of what's going on. When she says, "OK," Sally implies that she won't rat Don out. It almost feels like some kind of resolution, until she face-plants on her bed, and Don walks away, looking sicker than ever.

One thing I'll say for this season: For all of its recursiveness in terms of Don becoming the lothario he used to be, Weiner has taken the same oft-repeated scenario and raised the stakes astronomically. All of Don's previous affairs seemed pretty removed from his real life. No affair has ever threatened to lay ruin to his world quite like this one with Sylvia Rosen. The irony is that this affair has very little to do with Sylvia herself. The affair began because Don was jealous of his only friend. The affair haunted Don because he couldn't quite believe that a woman would cut things off before he did. And the affair resumed because Don stepped in to help keep Mitchell out of Vietnam, also because of Arnold. But with Sally having witnessed Don and Sylvia together, the affair's revelation now has the power to destroy Don's marriage, his only friendship, and his relationship with his daughter in one fell swoop.

What kinds of favors will Don have to dole out to keep this affair from decimating his entire life? It'll be interesting to watch Don scramble, but we know he won't succeed. Right now he's as doomed as that rat under Peggy's couch, slowly bleeding out while everyone stands by and waits for the end to finally come.