Does the conservative Florida senator still want to be instrumental in passing reform? 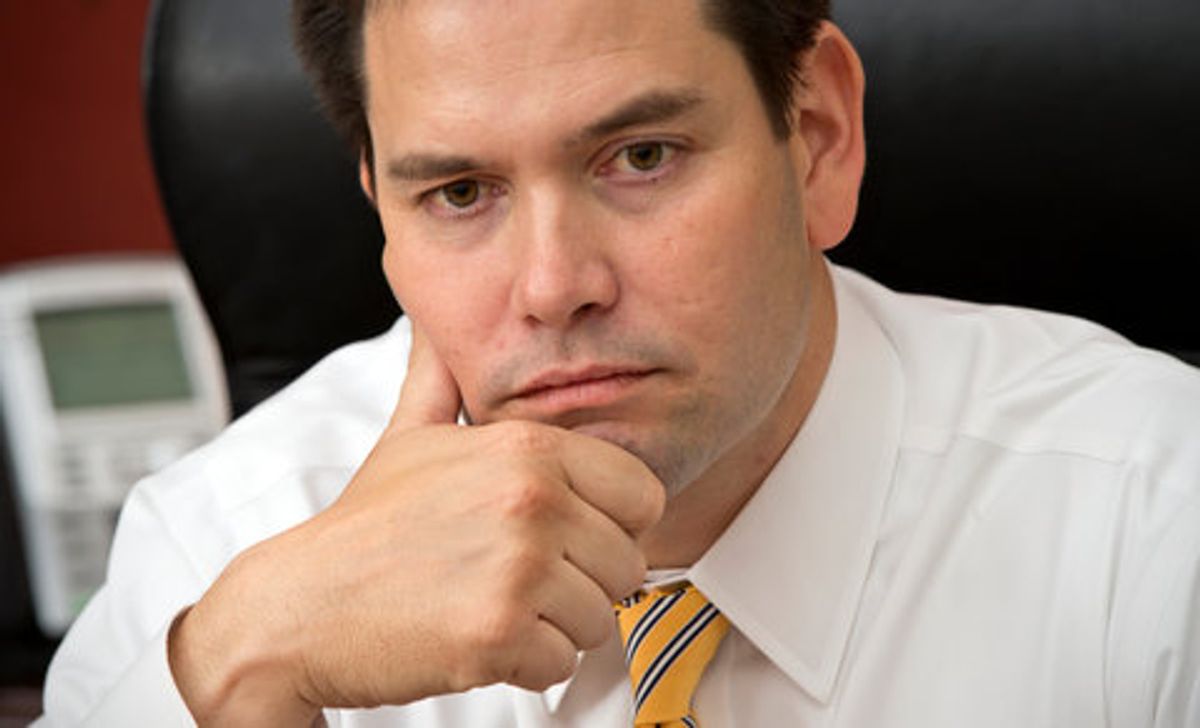 The Senate has just begun the weeks-long process of debating and voting on the immigration reform bill crafted by the "Gang of Eight." Harry Reid would like the bill passed on July 4, for the rather obvious symbolism. Supporters are still confident that the bill will pass the Senate.

The best thing the bill has going for it is that Mitch McConnell is going to actually allow it to come to the floor. (Minority Leader McConnell has veto power over most Senate business, because many  senators have convinced themselves that the founders wanted him to.) The "Gang" has four Republican members, meaning only a few more are needed in order to reach 60 votes and beat a potential filibuster. Kelly Ayotte is one Republican who's publicly announced her support for the bill.

That assumes, obviously, that all Democrats and all the Republican members of the "Gang" vote for their own bill, which might not happen. In fact "Gang" member Marco Rubio has threatened to vote against the bill unless it includes "tougher" border security. And amending the bill so that Democrats no longer want to vote for it is one of the Senate anti-reform bloc's strategies for defeating the bill. Rubio has begun signaling that he supports such an amendment, by Sen. John Cornyn, that would increase surveillance and enforcement at the border. More important, it would prevent the "trigger" point at which immigrants can apply for green cards, and then citizenship, from happening until a series of incredibly unreasonable security standards are met, including "90 percent of illegal border crossers" apprehended and "100 percent border surveillance, or situational awareness, of each one-mile segment of the Southern border."

(In Bush's second term, Cornyn made similar proposals, and then decided not to support reform after all, surprise, surprise.)

Meanwhile, Ted Cruz, a right-wing populist Senate newcomer who may want to be president, just like Sen. Rubio, has, unlike Rubio, won himself a great deal of conservative affection by declaring himself immigration reform's greatest enemy in the Senate. In explaining his opposition to Yahoo, Cruz sums up the right-wing argument: If immigration reform fails, Democrats will be to blame, because they insisted that immigration reform actually do something about immigrants:

“The biggest obstacle to passing common sense immigration reform is President Barack Obama,” Cruz tells The Fine Print, going on to say that the White House’s “insistence” on including a path to citizenship is standing in the way of the bill’s ultimate passage.

Cruz has not "ruled out" a filibuster, which means he will filibuster. But then everyone already assumed the bill would require 60 votes to pass.

This is Rubio's problem: It's hard to see the GOP changing so much by 2016 that having been essential in passing immigration reform won't be seen by many conservative activists as a massive liability. Rubio had a "pass" from conservative media figures like Rush Limbaugh to work on this stuff before, because everyone sort of "agreed" immigration reform was necessary. The further we get from November 2012, though, the less urgent it seems, and the nativist factions are reasserting themselves. Mark Krikorian in the National Review and Mickey Kaus at the Daily Caller are trashing Rubio almost every day. This Powerline post is a good example of the sort of press he's increasingly getting. Rubio is now supporting amendments demanding incredibly strict border enforcement before the "path to citizenship" can begin. This is what conservatives want. The Powerline guy's headline is "MARCO RUBIO'S LATEST FIG LEAF." The problem, you see, is that Rubio's proposed security amendments will rely on the government to enforce them, and you can't trust the government. There's not really any pleasing these guys, except, of course, with a bill that provides no path to citizenship at all -- which is the Cruz approach.

The calculation now, for Rubio, is a bit complicated. If it looks like something close to the Senate bill can pass the House with Republican support, Rubio is no longer the sole conservative responsible for it happening. He escapes blame. If the Senate bill passes with Rubio's support and then Boehner decides to get the bill through the House with Democratic votes, Rubio will be branded a traitor to the conservative cause for the rest of eternity. If it passes the Senate and dies in the House, Rubio stuck his neck out for nothing.

When Rubio met behind closed doors with some of the most conservative members of the House, he was less trying to sell the bill than he was getting a feel for the room. As the National Review's Jonathan Strong says:

Opponents and advocates estimate that 10 to 20 Republican senators are on the fence. Politics, as much as policy, is driving their final calculus. What they need isn’t always some specific change but rather, as one top Republican described it, a “secret sauce” of political cover.

Rubio's argument is that he's working to make the bill conservative enough to pass. But aligning himself with people like Cornyn, whose goal is to make the bill totally unpalatable to Democrats, suggests that he'd be fine with simply making the bill unpassable. And right now prospects in the House look grim. Last week, Republicans passed a bill designed to force the administration to deport "Dream" immigrants -- people who've done well in school or in the armed forces since arriving here as children. Former House "gang" affiliate Raul Labrador quit the group. House Judiciary Committee Chairman Bob Goodlatte, whose committee will have to approve the bill before it reaches the House floor, doesn't want a comprehensive bill. He wants a series of smaller, stand-alone bills that will allow Republicans to vote for more border security without also voting for "amnesty." Few Republican members of the House have any personal political incentive to moderate on immigration: Most of their seats are safe.

And in 2014, and 2016, conservative voters won't be thinking of the long-term demographic health of the Republican Party. They'll just be asking whether Republicans worked with or against this reviled administration. Rubio knows this. His decision to become a key player on immigration was based on his ambition, not any particular principled concern for the undocumented. His ambition will continue to determine his course of action.