“I am the conduit” for deal on immigration reform, he tells Fox News, while standing on the far-right fringe 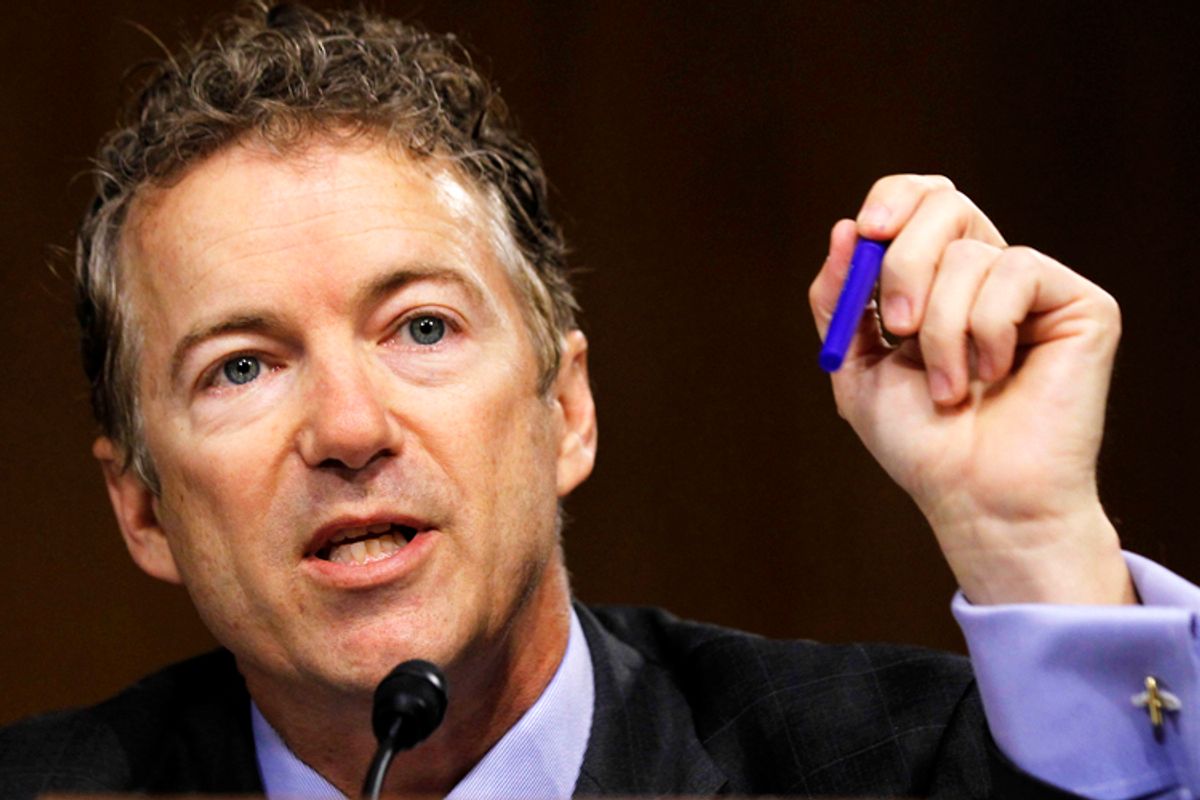 Again I ask: Is Sen. Rand Paul maybe not so bright? Last week he denounced new National Security Adviser Susan Rice for being "the person who is guilty of misleading us over the Benghazi tragedy." Since a trove of official emails documenting the creation of the Benghazi talking points proved that Rice had nothing to do with them, I suggested Paul was either lying, or too dumb to understand what the email revealed.

Now, on Fox News Sunday, he pompously declared “I am the conduit” for “compromise” on immigration reform, suggesting his ties to the far right in the House as well as mainstream Republicans in the Senate make him the man to broker a deal. Except Paul opposes any kind of specific pathway to citizenship for folks who are here illegally, which is a far-right staple that will make a deal impossible (h/t Crooks and Liars).

Fox host Chris Wallace actually challenged Paul on that point, noting that a new path to citizenship is a cornerstone of every serious immigration reform proposal under discussion. (Even ultra-right Rep. Raul Labrador, who dropped out of House Gang of Eight talks last week, seems to accept that such a path is necessary – he just doesn’t want the folks who are on it to get any kind of publicly subsidized medical care while they’re here.)

“You now have come out against a new path to citizenship,” Wallace observed. “Senator, as a practical matter, isn’t that going to prevent any kind of comprehensive reform?”

Paul disagreed. “I am willing to compromise. For example, I would let you, if you have a work visa, also stand in the citizenship line, but not a new citizenship line. There currently exists a line, if you’re in Mexico City right now, and you want to be a citizen in our country, you get in that line. I would let workers who are here on work visas get in the same line; I wouldn’t create a new pathway or a new line.”

So does he not know what “compromise” means?

In fact, he probably doesn’t know what the existing Senate bill means when it comes to a path to citizenship. To be fair, Senate Republican immigration reform backers are trying to fudge this very question, insisting that undocumented immigrants will have to follow the same path as legal immigrants who want citizenship – there will be no “special” path. But the truth is, the Senate bill under consideration creates several different ways for the undocumented to first legalize their status and then become citizens. They can apply for “registered provisional immigrant status,” if they pay a $500 fine and pass a criminal background check. After 10 years, they can apply for a new category of “merit-based” visas designed pretty explicitly for them, with no cap on the number that can be awarded, along with a shortened three-year wait for citizenship, for a minimum 13-year wait. So it may not be a “special path,” but rather multiple convoluted paths designed for them.

MSNBC’s Benjy Sarlin (formerly of TPM) has the best account of the bill's winding "pathways" that I’ve read. Sarlin also caught Paul trying to have it both ways on the path question earlier this year. At any rate, Paul is on the right when it comes to a path to citizenship, yet he self-importantly insists the path to compromise leads through … Rand Paul.

"The whole point is there needs to be a conduit," he explained. "I am the conduit between the conservatives in the House who don't want a lot of these things and more moderate people in the Senate who do want these things."

Of course working with Paul, Senate negotiators would be stuck dealing with someone whose position on a path to citizenship is further right than many GOP House members. If the Senate gives Paul what he wants in the Senate bill, imagine how much worse it will get in the House.

Meanwhile, Sen. Kelly Ayotte announced her decision to back the Senate Gang of Eight, giving them one less reason to court Rand Paul. Of course, Ayotte insists the bill will make the undocumented “get in the back of the line,” but presumably her Gang of Eight amigos John McCain and Lindsey Graham have briefed her on what the bill really does.

Paul is turning out to be a rather pompous guy for a supposed man of the people, given to telling us what he would or wouldn’t do if he were the president – he would fire Hillary Clinton over Benghazi, and he “couldn’t imagine” keeping Susan Rice in her current job, let alone give her a promotion, if he were her boss. He seems to alternate between imagining himself as president and imagining himself as the man in Congress everyone ought to be courting to get anything done. Only Sen. Ted Cruz rivals Paul in self-regard. It will be an amazing duel of self-regard if both men run for the GOP nomination in 2016.