Twitter's a nice start. But if she wants to get serious about 2016, she needs to get involved in the 2014 midterms 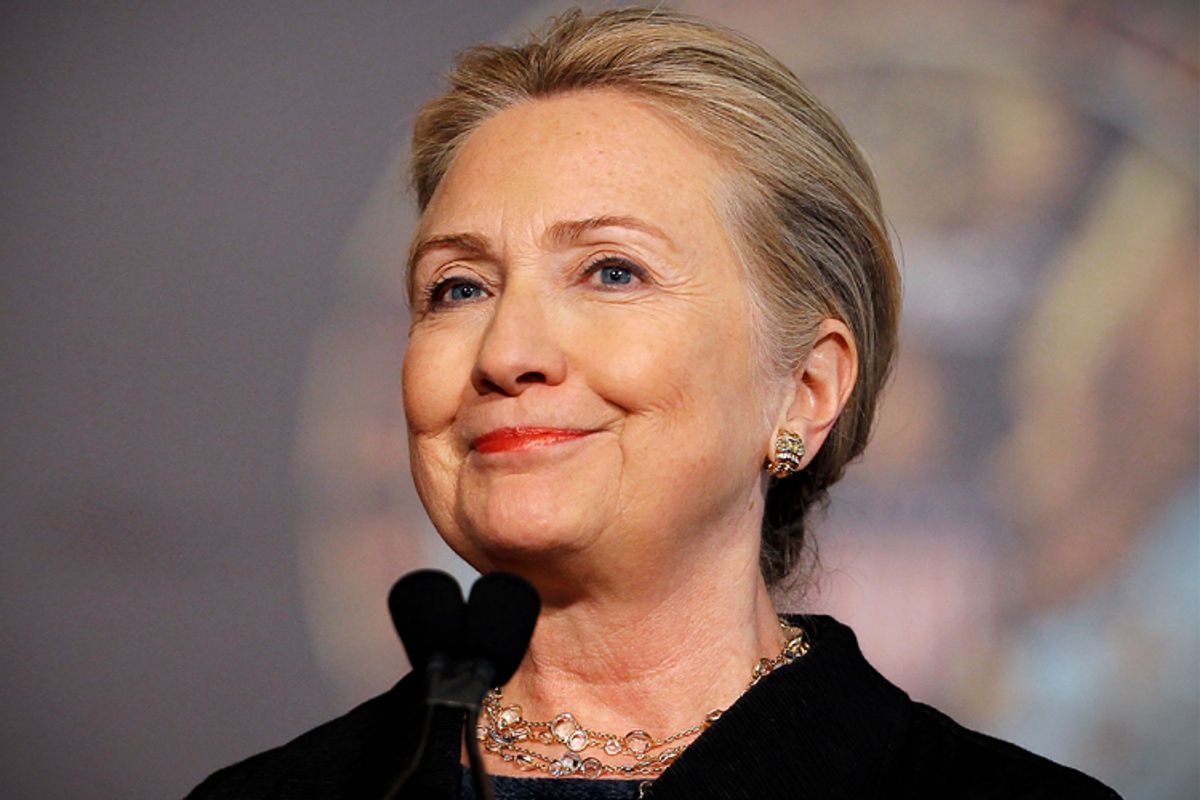 If successfully running a presidential campaign was as easy as launching a kickass Twitter account, Hillary Clinton would be unbeatable in 2016. Her widely hailed Twitter debut was perfect, embracing her public and private roles – wife, mom, senator, Secretary of State – sending up the sexist mockery she’s endured -- “hair icon,” “pantsuit aficionado” – and leaving the next entry in her bio a teasing “TBD.”

Her cheeky Twitter debut told me two almost contradictory things: Hillary Clinton is having an enormously good time with this phase in her life, and she’s planning on running for president.

Obviously a winning campaign will be way harder than launching her Twitter presence, but let’s give her credit for a bold first step. Still, I was thrilled by Clinton’s sure-footed Twitter move – and then I was kind of horrified by how thrilled I was, particularly as I saw a comparable giddiness among liberals and the media (and no, they’re not the same thing.)

It’s understandable: liberals are demoralized by the media hyping phony White House scandals, most notably Benghazi and the IRS mess, and they’re divided over revelations about the ever-growing national security state under President Obama. The media, meanwhile, seems to sense that Scandalgate is almost played out, while the genuine controversy over the NSA revelations is never going to gain traction with the audience, which polls show support security state overreach. So hey…Hillary!

But acting like we’re all going to be delivered into a parallel Democratic administration where everything is one long Tumblr tribute to said Democrat’s coolness is in some ways a return to the wishful thinking that troubled the otherwise brilliant Obama 2008 campaign. If the glass-ceiling cracker is going to shatter it this time, she needs to gear up with more than Twitter and shout-outs to the folks behind “Texts with Hillary”: She has to make the 2014 midterms a referendum on GOP obstruction, and campaign like her presidency depended on it. Because it does.

I started thinking about Clinton’s role in 2014 a couple of weeks ago, discussing her increasingly likely 2016 run on “Hardball.” Chris Matthews asked how bold a campaign she needed to run, and whether somehow, she had to run against or otherwise separate herself from Obama. If not, who or what was she running against?

It was pretty obvious to me: She cannot and should not separate herself from the president, and she’s running against the increasingly unhinged Republican Party that impeached her husband because they couldn’t beat him at the polls, and then tied her boss in knots of scandal and obstructionism when they couldn’t beat him, either.

Clinton can’t run against Obama because she worked for him -- but also because she needs to consolidate the Obama coalition and make it a Clinton coalition. There are still embers of bitterness over the 2008 primary, and any effort to distance herself from the president, real or imagined, could fan them. Besides, Al Gore made a mistake by running away from Clinton record; Clinton’s 2016 message should be that she will consolidate the gains of the Obama presidency, from health care reform to banking regulation to women’s rights, and extend them. She will complete the president’s work by vanquishing his intransigent, unreasonable, race-baiting foes. And she is uniquely positioned to do it.

The former Goldwater girl is in a particularly great position to say: I didn’t just leave my party, my party left me. So many Republican, market-based alternatives to alleged Democratic over-reliance on government – from cap and trade to the health insurance individual mandate to the Earned Income Tax Credit – were adopted by first her husband and then Obama, only to be jettisoned by an increasingly extremist GOP.

But Clinton can’t just begin to make this case in 2015 or 2016; she needs to be part of a Democratic team making the 2014 midterms a referendum on the uncompleted business of the Obama presidency – and on the GOP’s outrageous abuse of its minority status to block everything from popular legislation to agency nominations to thwart this Democratic president, the last one, and likely the next. If voting patterns follow the modern electoral norm, 2014 turnout will resemble 2010 turnout, not the Democratic waves of 2008 and 2012, and result in more power for the obstructionist GOP in the House and Senate.

Clinton has enormous political capital with the Democratic base, and beyond it. She needs to spend some of it turning out voters in 2014, or the presidency might not be a prize worth winning, except as another title in your Twitter bio.