If you know nothing about whistle-blowers, don't cover them 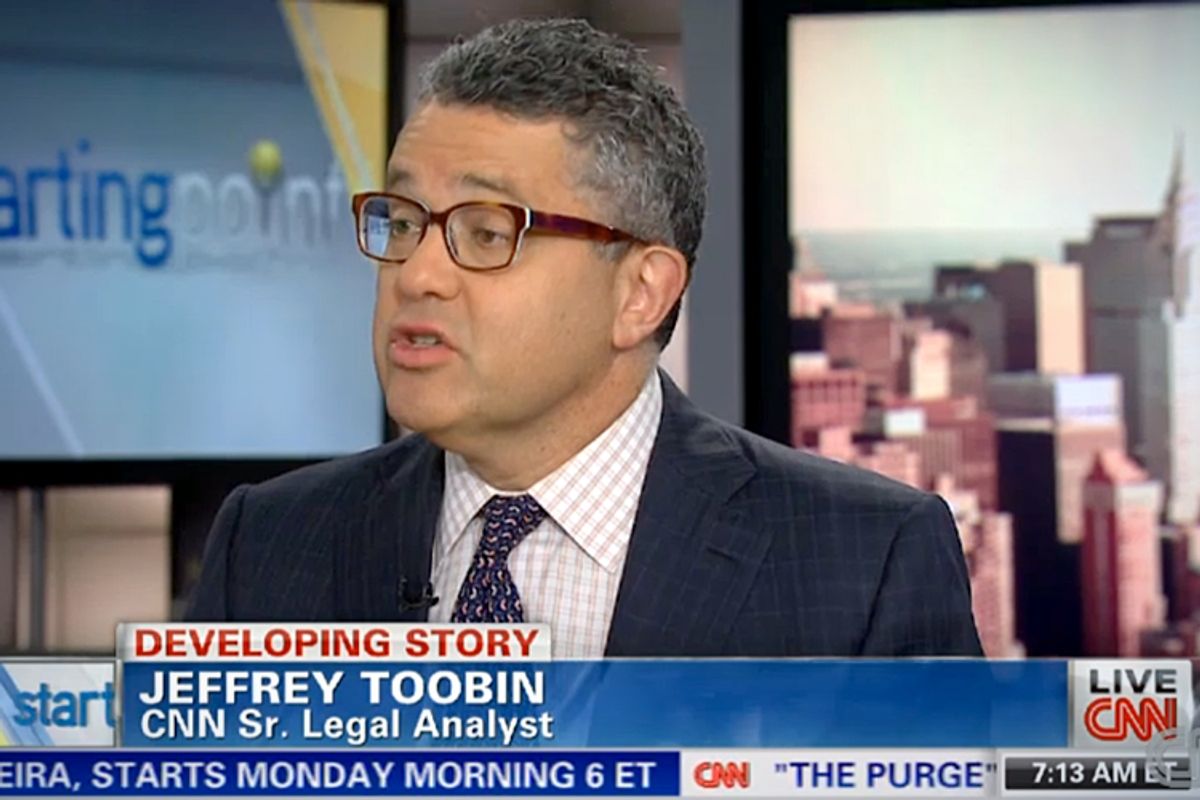 Pundits and those with ties to the power elite, whom media conglomerates allow to appear on television regularly, happen to have a profound appreciation for all apparatuses and mechanisms of the national security state. They all also hold the view that if Congress and federal judges have not opposed the expansion of massive and secret surveillance programs then it must all be legal and not in violation of the Fourth Amendment or any other laws.

From that view flows the reaction that anyone can see on television right now as the media discusses Edward Snowden, the National Security Agency whistle-blower whose disclosures on top-secret surveillance programs were published by the Guardian‘s Glenn Greenwald.

Jeffrey Toobin, a senior CNN legal analyst and contributor to the New Yorker, was leading the charge against Snowden in the media by characterizing him as a “grandiose narcissist who deserves to be in prison.” He appeared on Piers Morgan’s program later in the evening and said, “I think there are right ways to do it and there are wrong ways to do it, and by a 29-year-old kid, just throwing open the safe and giving away documents that people have devoted years of their lives to creating and protecting. That’s the wrong way to protest.”

Toobin appears to cling to this faith in institutions that are wholly subservient to the national security state, believing that if abuses of power were truly occurring Congress or an inspector general would listen to someone like Snowden and it all would be corrected.  But, when NSA whistle-blower Thomas Drake went to the inspector general to expose fraud, waste, abuse and illegality related to a private contractor boondoggle at the NSA, according to writer Marcy Wheeler, he became the target of a leak investigation.

Jesselyn Radack, who sought to expose how the Justice Department was involved in the coverup of torture American Taliban John Walker Lindh experienced, told Harper‘s Scott Horton in 2012 that an inspector general can start investigating the whistle-blower instead.

“After seven months of a pretextual investigation, the IG told my attorney that he had ‘looked into’ my whistleblower allegations, and that he was ‘not going to pursue it,’” according to Radack. “Obviously the IG didn’t look very deeply. He didn’t even bother to ask me, the whistleblower, what had happened. Not bothering to interview the complainant shows where the IG’s priorities lay. Moreover, Justice never responded to the congressional request.”

Thus, sheer ignorance or the will to make excuses for the national security state is one of the few ways to explain the arguments of people like Toobin, who persistently maintain that nothing foul could be happening.

Kathleen McClellan of the Government Accountability Project was also on CNN during the day and had an opportunity to rebut Toobin during one of his many appearances. She told Toobin, “You can ask some other NSA whistle-blowers that are clients of ours at the Government Accountability Project, Thomas Drake, William Binney and J. Kirk Wiebe, who raised concerns years ago about this same exact kind of surveillance. And not only were their concerns ignored, but the government prosecuted them, criminally investigated all of them, and prosecuting Mr. Drake under the Espionage Act.”

Toobin spent most of the day, like others, highlighting how no individual should be able to claim the power to be able to unilaterally decide what information should and should not be public. McClellan pointed out that this distracts from the actual message and, “We’re here because of something the government did, which was monitor innocent Americans’ communications and do so in a way that was so alarming that even two senators who knew everything about the program said that Americans would be shocked and angry when they found out.”

This also ignores two realities, which Toobin paid no attention to in his condemnations of Snowden throughout the day: how the United States has a rampant over-classification problem when it comes to information, especially that which pertains to the operations of national security agencies, and how senior officials in government or aides of Congress people make unilateral decisions to release secret information all the time that they maybe should not be disclosing because it exposes no crimes or illegality but merely advances a political agenda.

Snowden paid particular attention to this dynamic when he made the decision to disclose information about NSA surveillance programs when he told Greenwald in his interview, “The public is owed an explanation by the people who make these disclosures that are outside the democratic model. When you are subverting the power of government, that is a fundamentally dangerous thing to a democracy and, if you do that in secret consistently, as the government does when it wants to explain a secret action it took.”

The government will tell the press certain things about programs or policies to get the press on its side. In the minds of people like Toobin, that is entirely of no concern when engaging in caricaturizations of whistle-blowers like Snowden.

Feeding into the caricaturization, which Snowden anticipated, Megan McArdle of the Daily Beast ostensibly suggested that “whistleblowers are weird” in an article with that same headline.

What whistleblowers do is usually moral.  A free society depends on people who are willing to go public when they see wrongdoing.  But there are good reasons that whistleblowing behavior is actually pretty rare.  [emphasis added]

After highlighting why no one would want to work with a psychopath in their working place, McArdle writes:

Whistleblowers are not psychopaths; psychopaths are too self-interested to risk all to right a wrong.  But they are weird in their own way, because they have to be in order to be willing to violate the trust of their group in order to protect a principle.  In Eyal Press’ book on dissenters, Beautiful Souls, they come off as rigid, idealistic, a bit self-righteous, and more than a little naive.  Those are not characteristics that make you fit in.

Though time and time again, American society has depended on principled people with idealism to use their moral compass and take a stand in order to correct injustice or challenge corruption in this country, McArdle appears to be wholly ignorant of that history. She may be right that most Americans, who have been conditioned to accept intrusions into their lives so national security agencies can operate without any checks, are yielding, apathetic and unwilling to take the kind of stand that Snowden or other whistle-blowers in history have. To denigrate whistle-blowers as deviants, however, merely enables a climate where officials who commit criminal acts or engage in wrongdoing skirt accountability and enjoy impunity.

Joe Klein of Time.com putridly rationalized what the NSA does, writing, “I expect that some of my phone and e-mail traffic has been picked up in the data trawling. I travel fairly frequently to places like Iran, Afghanistan, Egypt, the West Bank and the rest of the region; part of my job is to talk to partisans on all sides — and also to talk to sources in the U.S. military and intelligence communities. I have no problem with the government knowing that I’m doing my job.”

It is not difficult for Klein to accept that the tentacles of the surveillance state will intrude upon his life because he is not someone who should be considered a member of the watchdog press. He is not known as an investigative journalist or national security journalist, someone who should be afraid of having his phone records swept up because he is helping lower-level government employees expose corruption or malfeasance.

Klein also declared, “A great many lives are potentially at stake … and our national security is more important than any marginal — indeed, mythical — rights that we may have conceded in the Patriot Act legislation. In the end, the slippery-slope, all-or-nothing arguments advanced by extreme civil libertarians bear an uncomfortable resemblance to the slippery-slope, all-or-nothing arguments advanced by the National Rifle Association.”

It was very similar to what Ambassador James Woolsey, former CIA director and former vice president of Booz Allen Hamilton, the contractor Snowden worked for, had to say on “Piers Morgan” last night:

…The problem is, that once you start explaining to al Qaeda and Hezbollah how you are operating, they can avoid what you’re doing, and you can’t explain to the American people without explaining to Hezbollah and al Qaeda. Once you’re sitting there blabbing about how these decisions are made, you have decided you’re going to tell our enemies — those who want to kill us, those who want to fly airplanes into buildings and all the rest — how this all works.

And you’ve decided that yourself if you’re Snowden. So he could well be responsible in the future for many, many deaths. We don’t know and we may never know for sure, because one doesn’t know what goes into individual decisions by the terrorists. But Snowden has made it easier for them to kill Americans and others.

Snowden arrogated that entire decision to himself. He decided that it was him who got to strike that balance, not the elected representatives that we vote for, not the president, not the courts.

And I think for arrogance and improper behavior, the — arrogating to yourself that kind of power when you’re supposed to be taking care of your duties in the intelligence community is stunningly wrong and since he’s confessed to the crime, I hope that when we are able to take him into custody, he’s locked up for the rest of his life.

This is the kind allegations that Pfc. Bradley Manning is facing in his trial and they essentially amount to reactionary charges that the person’s releases somehow “aided the enemy.” Anyone making these allegations on television is rarely made to provide proof to support any risks or harm will be incurred as a result of disclosures. In fact, sometimes in the same breath these people will also say that nothing new was learned because they were aware the government engaged in the activities that the whistle-blower considered to be abusive or corrupt. That, of course, strains logic because if they knew before, the “terrorists” knew before and would already have been plotting attacks if this information was useful to them at all.

The bottom line is all of these people, whom media conglomerates or establishment news organizations provide a forum for comment, have no problem with the arrogation of power in the executive branch but will display unbound contempt for individuals who arrogate power to act as truth-tellers and inform the public of information they believe the public has a right to know.

Not only do they ignore or disregard the fact that the government has carved out national security exceptions to protect power from disclosures that Snowden made by ensuring that he can be prosecuted, jailed and effectively silenced no matter how he makes disclosures, but they cheerlead for zealous prosecution of these individuals for periods of time that exceed the length of time they would ever advocate for torturers, war criminals or those who commit felonies in violation of laws intended to protect individual rights and liberty in the United States.

Which means that when people like Edward Snowden come forward, not only do they have to fear their own government but they also have to fear their country’s media and the pundits who populate the airwaves because they fully understand they will become victims of news coverage that might as well be paid propaganda produced by senior officials inside the national security state.