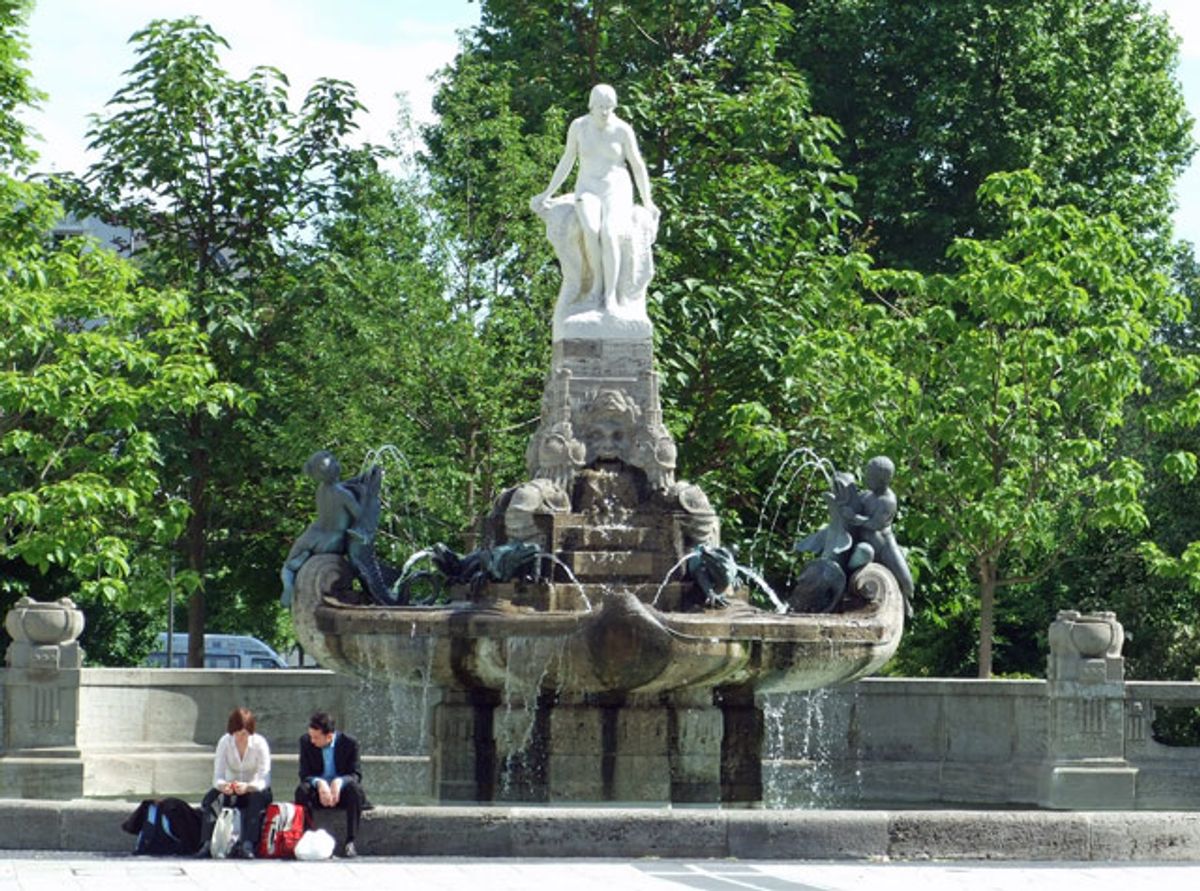 This re-creation of Frankfurt’s Fairy Tale Fountain was built at Mansudae Art Studio in North Korea. (via Wikipedia) (Wikipedia)
--

Here’s something you may not have known: there’s a massive art factory in North Korea that makes monuments, sculptures, statues museums, and more for at least a dozen countries around the world. In a fascinating story in Bloomberg Businessweek, writer Caroline Winter lays out the details — or at least those she can gather — of Mansudae Art Studio in Pyongyang, which takes up 30 acres, employs 4,000 people, 1,000 of them artists, and also includes a soccer stadium, paper mill, sauna, and kindergarten. Why does every story that comes out of North Korea seem somehow more bizarre than the last?

Senegal’s 164-foot-tall African Resistance Monument is another example of Mansudae’s handiwork. (click to enlarge) (via dorothy.voorhees on Flickr)

Among the international jobs the workers at Mansudae have completed are: a reconstruction of the Fairy Tale Fountain in Frankfurt, Germany; Senegal’s mammoth (164 feet tall) African Renaissance Monument; the Namibian State House; and the soon-to-open Grand Panorama Museum in Cambodia. The studio/factory is also responsible for North Korean state propaganda, which includes portraits, posters, and monuments celebrating country leaders Kim Il Sung, Kim Jong Il, and Kim Jong Un. But the existence of an art factory making propaganda for an autocratic government isn’t strange; it’s the international commissions that are hilarious and unexpected.

According to Winter, Germany is thus far the only Western democracy to have engaged the services of Mansudae. It did so in 2005, commissioning the fountain re-creation for €200,000 total ($264,480 today). Klaus Klemp, deputy director of Frankfurt’s Museum of Applied Art, told Winter, “The top tier artists in Germany simply don’t make realist work anymore. North Koreans on the other hand haven’t experienced the long evolution of modern art; they are kind of stuck in the early 1900s, which is exactly when this fountain was made.” And it went perfectly well, with the exception of a slight style issue: the North Korean sculpted the woman with “kind of a cement block hairdo,” in Klemp’s words — a little too Communist/socialist realist for 21st-century Germany.

Narcissistic leaders of a handful of African countries have also outsourced their projects to Mansudae, for which they’ve faced criticism at home. But you just can’t beat the price! Former Senegalese President Abdoulaye Wade apparently told the Wall Street Journal, “Only the North Koreans could build my statue. I had no money.”

Making the story even weirder is the fact that international sales of the studio’s smaller works are managed by an Italian man named Pier Luigi Cecioni. Its “official web-site abroad” is also run out of Italy and assures you that Mansudae “is not a sort of chain factory, like some Chinese and other Oriental centers, nor a school, but a very high quality art production center.” And although grandiose tributes to quasi-corrupt leaders with dictatorial tendencies appear to be Mansudae’s specialty, the artists there also excel at painting realistic street scenes and landscapes, many of them modeled on classical European predecessors. The website offers an array of harmoniously harmless pictures like this:

Prices aren’t listed, but you can get the buying process started by filling out this form. You could really build an amazing North Korean art collection this way … or at least spend hours trying to understand more about North Korea by browsing the works on offer. Below are a few more of our favorites, but nothing beats clicking around the site yourself.