The raid came on the 12th day of nationwide protests 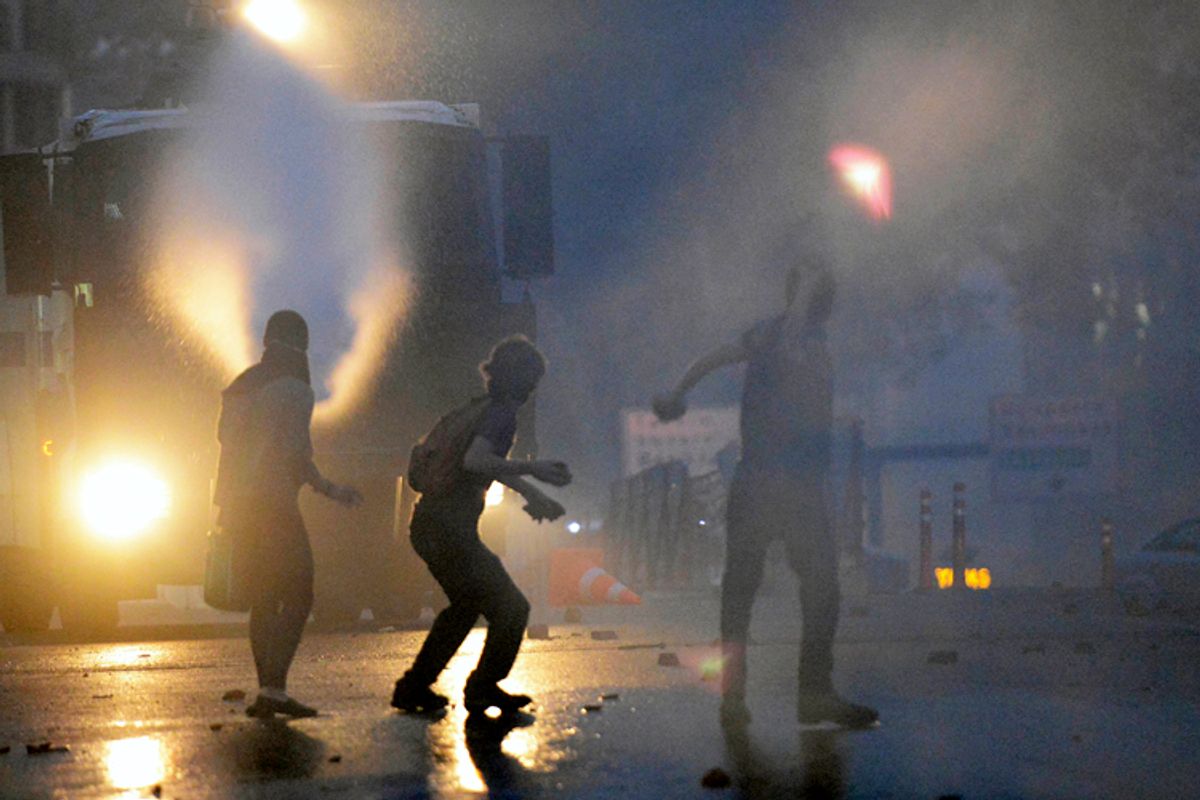 Riot police use tear gas and pressurized water to quash a demonstration by hundreds of people trying to prevent the demolition of trees at an Istanbul park, Turkey, Friday, May 31, 2013. (AP)
--

ISTANBUL (AP) — Hundreds of riot police overran improvised barricades at Istanbul's Taksim Square on Tuesday, firing tear gas, rubber bullets and water cannon in running battles with protesters who have been occupying the area for more than a week.

The police raid, which came on the 12th day of nationwide protests, sparked clashes with groups of protesters well into the afternoon. Most protesters fled into the adjacent Gezi Park, where hundreds have been camping out to stop a developers from cutting down trees in the park.

A peaceful demonstration against the park's redevelopment has morphed into a test of Prime Minister Recep Tayyip Erdogan' authority. Amid Tuesday's clashes, Erdogan made it more than clear that he had come to the end of his tolerance.

"To those who ... are at Taksim and elsewhere taking part in the demonstrations with sincere feelings: I call on you to leave those places and to end these incidents and I send you my love. But for those who want to continue with the incidents I say: 'It's over.' As of now we have no tolerance for them," Erdogan said, speaking in the capital, Ankara.

"Not only will we end the actions, we will be at the necks of the provocateurs and terrorists and no one will get away with it," he added.

The unrest — which has spread to 78 cities across Turkey — has been inspired in part by what some see as Erdogan's increasingly authoritarian style of governing and his perceived attempts to impose a religious and conservative lifestyle in a country with secular laws.

Erdogan, a devout Muslim, says he is committed to Turkey's secular laws and denies charges of autocracy.

After the police raid on Taksim Square, bulldozers immediately began dismantling some of the barricades and makeshift shelters. By afternoon, the clashes had extended to the very edge of Gezi Park, with acrid gear gas covering its sides, even though authorities had promised not to go into the park.

Several people were rushed on stretchers to a first aid station manned by protesters in the park before being taken to ambulances. Others were carried, overcome by tear gas.

Three people have died — two protesters and a policeman — and more than 5,000 have been treated for injuries or the effects of tear gas since the protests began. The government says 600 police officers have also been injured.

Throughout the protests, Erdogan has struck a defiant tone, vowing to press ahead with the Taksim redevelopment plans, dismissing the protesters as extremists and the protests as undemocratic plots to topple his government, which was elected with 50 percent support in 2011.

He insisted again Tuesday that the protests were part of a conspiracy against his government.

The protesters, he said, " are being used by some financial institutions, the interest rate lobby and media groups to (harm) Turkey's economy and (scare away) investments."

He added: "I want everyone there to see the big picture, to understand the game that is being played and I especially invite them to evacuate (Taksim and Gezi Park). I expect that of them as their prime minister."

Erdogan has called for major pro-government rallies to be held in Ankara and Istanbul this weekend.

"We are not trying to say look we are greater, we are more populous. We are going to the rallies to ensure that the voice of silent masses is heard," he said.

The government announced late Monday that Erdogan would meet with some of the Gezi Park protesters on Wednesday, but that authorities would not allow "illegal" demonstrations to continue.

In Taksim, police addressed the protesters through loudspeakers, insisting they had no intention of moving into the park, but needed to clear the square and take down protest banners. They appealed for calm, saying they did not want to use tear gas.

But in his speech, Erdogan implied the park would not be allowed to be occupied for long.

"I am sorry but Gezi Park is for taking promenades, not for occupation," he said, referring to the meaning of the word Gezi, which translates as promenade.

Clashes broke out on the edge of the square between riot police and small groups of protesters throwing fireworks, firebombs and stones at the police water cannon trucks, with authorities responding with tear gas and jets of water. The vast majority of protesters, most of who remained in the park, were peaceful.

Unsuspecting commuters emerging from the square's metro station ran for cover, aided through the clouds of acrid smoke by protesters offering them antacid solution in spray bottles.

One protester said he joined the protest in Gezi Park because his cousin was beaten by police during the initial clampdown.

"I'm here because I'm trying to defend my human rights," said protester Kenan Agac. "I'm not against police but his morning they came and threw tear gas."

Istanbul Governor Huseyin Avni Mutlu said the police operation Tuesday aimed to remove the posters and banners hanging at Taksim, some of which belonged to outlawed groups, that were damaging Istanbul's international image.

He said clashes erupted with "marginal groups" that had thrown fireworks and firebombs and had set one police vehicle alight, and he reassured people holding peaceful protests at Gezi Park that they would not be touched.

"I would like to say one more time that there is no question of any (police) intervention at Gezi Park," he said, adding that a number of protesters were detained.

But protesters were skeptical.

"Of course nobody believes the police or the governor when he says police will not interrupt the gathering in Gezi Park," said Tarsu Orzyurt. "We saw policemen telling us 'come to the street and don't be afraid,' then they shoot at us (with tear gas). So nobody believes them."